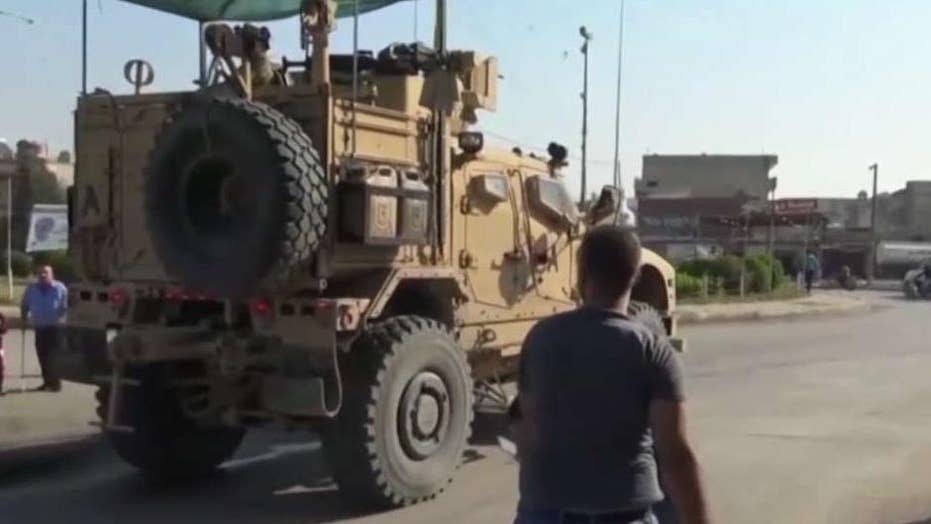 Turkey and Russia announced Tuesday that both countries will soon start conducting joint security patrols along a border region in Syria following the removal of Kurdish forces there.

Turkey and Russia, Lavrov says, would then start border patrols in Syria to keep the Kurds out and help facilitate the return of refugees there. The region is where American troops had been patrolling with Turkish forces two weeks ago before they pulled out -- and the deal struck Tuesday shows the alliance between NATO member Turkey and Russia is strengthening.

“As of today, Turkey and Russia will continue to contribute their efforts to achieve the peaceful solution [in] Syria,” Erdogan said during the press conference.

Earlier Tuesday, Kurdish forces said they completed their pullout from a zone along the Syrian border as required under a U.S.-brokered cease-fire deal hours before it was set to expire.

Turkey launched its operation into northern Syria on Oct. 9, declaring that it aimed to push out Syrian Kurdish fighters it considers terrorists and an extension of a Kurdish insurgency within Turkey.

The U.S. then brokered a deal last week for a 120-hour pause in fighting that expires Tuesday night, to allow Syrian Kurdish fighters to leave areas Turkey controls.

Turkey seeks to establish what it calls a "safe zone," extending more than 250 miles along the Turkish-Syrian border and about 19 miles inside Syria, where it plans to resettle about 2 million of the roughly 3.6 million Syrian refugees currently living in Turkey.

"If America does not keep to its promises, our offensive will continue from where it left off, with a much greater determination," Erdogan said Tuesday. "There is no place for the (Kurdish fighters) in Syria's future. We hope that with Russia's cooperation, we will rid the region of separatist terror."

Although Turkish officials say the cease-fire agreement specifically covers a roughly 75-mile stretch between the Syrian border towns of Tal Abyad and Ras al-Ayn, Erdogan has made clear he wants a Turkish military presence along the full stretch of the border from the Euphrates River to Syria's border with Iraq.

Turkey's military said Tuesday at least 136 vehicles, carrying fighters, had left the region. It said it had recorded a total of 41 violations since the cease-fire came into effect. Kurdish officials have also accused Turkey of cease-fire violations.

Turkey's incursion into Syria has led to an international outcry, which has, in turn, enraged Erdogan, who has accused his NATO allies of not standing by Turkey.

European Council President Donald Tusk on Tuesday condemned the incursion and called on Erdogan to pull his troops out of the region.

In this photo taken from the Turkish side of the border between Turkey and Syria, in Ceylanpinar, Sanliurfa province, southeastern Turkey, smoke billows from a fire on a target in Ras al-Ayn, Syria, caused by shelling by Turkish forces, on Thursday last week. (AP)

Tusk, speaking to EU lawmakers in Strasbourg, France, said "no one is fooled by the so-called cease-fire" agreement, and that Turkey, which is a candidate for EU membership, "needs to end its military action permanently, withdraw its forces and respect international humanitarian law."

He added that "any other course means unacceptable suffering, a victory for Daesh (the Islamic State group), and a serious threat to European security."

Embattled Syrian President Bashar Assad also visited territory captured from Turkey-backed Syrian fighters in the northwestern province of Idlib on Tuesday, where he described Erdogan as a "thief."

State media showed images of Assad standing among Syrian soldiers in what the report said was strategic southern Idlib territory. The media quoted Assad as calling Erdogan a "thief who robbed factories, wheat, and fuel and is today stealing territory" — apparently referring to Turkey's invasion this month into northeastern Syria.