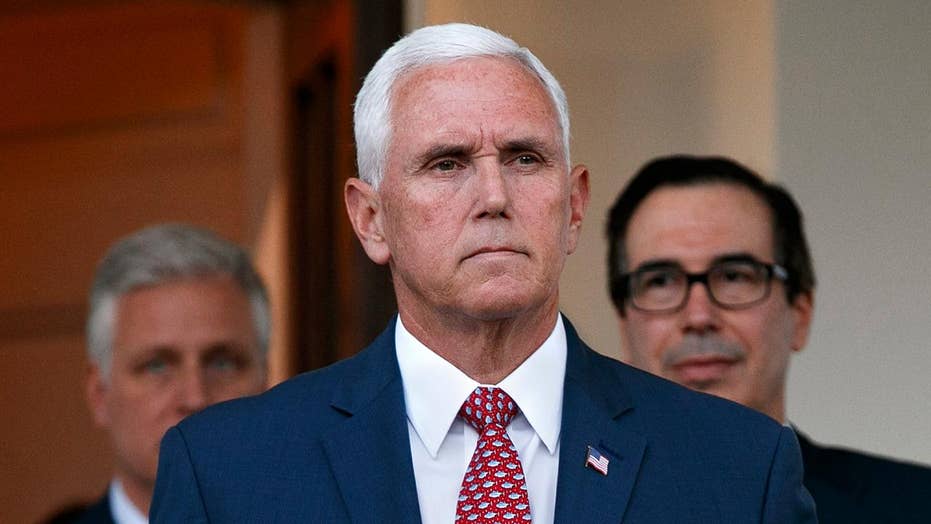 VP Pence to travel to Turkey for cease fire negotiations

Turkish strongman Recep Tayyip Erdogan said Wednesday he will speak to Vice President Pence and a U.S. delegation heading to Ankara over a potential ceasefire deal in Syria after apparently snubbing the group earlier in the morning.

The Turkish president initially appeared to indicate he would only speak to President Trump about the matter, but then reversed course and announced later that he would be talking to Pence, Secretary of State Mike Pompeo and National Security Adviser Robert O'Brien after all.

The declaration came hours after Erdogan said his country’s ongoing military offensive against the Syrian Kurds could end “as of tonight” if their fighters leave a designated border area.

“I am not going to talk to them,” the Turkish president first told a Sky News reporter Wednesday, referring to the U.S. delegation.

“They will be talking to their counterparts,” he added. “When Trump comes here, I’ll be talking.”

Erdogan, in a separate speech to Parliament Wednesday, made clear Turkey would not bow to pressure to reach a ceasefire deal and would press ahead with the military operation until Turkish troops reach a depth of around 19 to 22 miles inside Syria. He did say though that the offensive could end “as of tonight” if Syrian Kurdish forces there cleared out, the Associated Press reported.

Speaking to a group of journalists the day before, Erdogan said he told Trump, "We could never declare a ceasefire," adding that Turkey wouldn't negotiate with "terrorists."

The White House tells Turkey to stop the invasion and negotiate with the Kurds to end to the violence; Griff Jenkins reports from Washington.

The Cold War-era B61 nuclear bombs are said to be 100 to 250 miles from the Syrian border, The Guardian added.

France this week also called on members of the coalition fighting ISIS in Syria to regroup following a withdrawal of U.S. troops in the region, which paved the way for the Turkish assault.

Graham: Trump sent letter to Erdogan urging him not to invade Syria

Russia has moved to fill the void left by the U.S. in the conflict, deploying its forces toward Syria's border with Turkey.

Le Drian said France's "own security is at stake" amid the Turkish offensive – and "to accept this invasion" was giving ISIS "an open door" to return, as the chaos could allow thousands of Islamic State fighters detained in Kurdish-run prisons to escape.

Fox News’ Melissa Leon and the Associated Press contributed to this report.