In this Jan. 21, 2019, photo, North Korean defector who wished to be identified only as J.M., sits for a photograph during an interview in Seoul, South Korea. Experts and defectors say most of North Korea’s underground Christians do not engage in the extremely dangerous work of proselytizing. Instead, they largely keep their beliefs to themselves or within their immediate families. (AP Photo/Lee Jin-man)

It's hard to imagine how the crackdown on Christianity could get any worse in North Korea -- where the belief in God is virtually outlawed and dictator Kim Jong Un is treated like a diety -- but a watchdog group reports it is worsening as President Trump and Kim meet in Vietnam for their second summit aimed at denuclearization.

North Korean defectors describe situations of life back home, where they quietly sing Christian hymns every Sunday while someone is on alert for informers. Another cowered under a blanket or in the toilet to pray, and another detailed a fellow prison inmate who'd been severely beaten for refusing to renounce her Christian faith.

NORTH KOREA PRISON CAMP SURVIVOR: 'AM I A CHRISTIAN? YES. I LOVE JESUS' BUT I DENY IT'

Human rights groups point out that North Korea's human rights record is notably missing from the summit agenda, including the recent rise in religious persecution, where the possession of Bibles, open religious services, and any attempt to build an underground church could result in torture, lengthy prison terms, or execution. 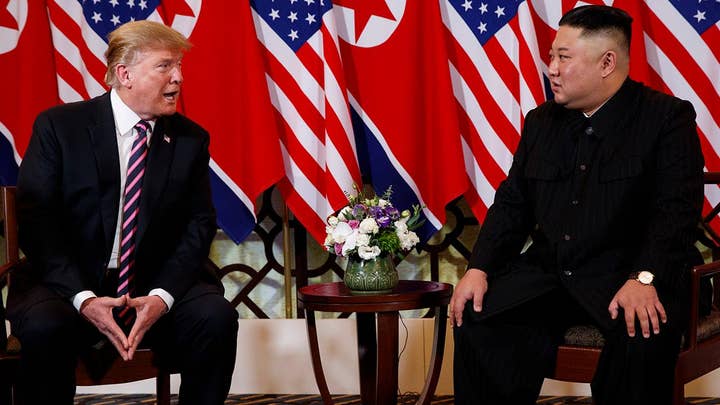 Despite that, Open Doors USA, a watchdog organization that has listed North Korea as the worst perpetrator of Christian persecution for 18 years straight, is urging Trump to change that.

"Open Doors’ hope is these negotiations will discuss basic human rights for all citizens and some relief for the No. 1 enemy of the state of North Korea’s dictatorship—Christians," David Curry, president and CEO of Open Doors USA, told Fox News. "Tens of thousands of people are in concentration camps because they professed faith or were caught owning a Bible. We have seen little change thus far."

"Tragically, there are many signs that the persecution of Christians in North Korea is getting worse," Open Doors said. "Local sources report to Open Doors there has been an increased number of arrests and abduction of South Korean and Chinese Korean Christians and missionaries in China, strengthened border control with harsher punishment for North Korean citizens who are repatriated from China, and increased efforts by the North Korean government to eliminate all channels for spreading the Christian faith."

In this Dec. 21, 2018, photo, North Korean defector Kwak Jeong-ae, 65, shows a drawing about North Korea during an interview in Uijeongbu, South Korea. Experts and defectors say most of North Korea’s underground Christians do not engage in the extremely dangerous work of proselytizing. Instead, they largely keep their beliefs to themselves or within their immediate families. (AP Photo/Lee Jin-man)

The group asks people to pray that "Christians in North Korea would find hope and comfort in Jesus," that "they would have opportunities to share this hope with others around them," that "God would soften the heart of Kim Jong Un as He did Pharaoh's," and "for the work Open Doors does to support North Korean believers."

The North Korean regime has five government-sanctioned churches in its capital, Pyongyang, but experts say they are fakes aimed at covering up the nation's religious abuses and winning outside aid. Prior to the Korean War in the 1950s, North Korea had a flourishing Christian population, but Kim Yun Tae, the head of Unification Strategy Institution, a private think tank in Seoul, said he's heard countless testimonies of religious crackdowns on underground Christians as he has talked to more than 1,000 defectors over the past 20 years.

Most remaining Christians in North Korea likely learned about the religion when they went to China after a devastating famine killed hundreds of thousands in the mid-1990s. Converts were later captured in China and jailed once they were sent back to the North and while most denied their faith during interrogations for survival, not everyone did.

A women's prison at the border of North Korea at Dandong. (Open Doors USA)

One defector shared a story of a fellow inmate who told interrogators: "I'm a child of God and I'm not scared to die. So if you want to kill me, go ahead and kill me."

She was beaten and then taken away for good.

Another outspoken Christian man was beaten frequently, until one day they hauled him away.

“While leaving, he shouted to us, ‘God will save you.’ I hadn’t encountered Christianity before at the time, and I thought he was crazy,” said Jung Gwangil, a North Korean defector-turned-activist.

Liberty in North Korea (LiNK), a group that has rescued over 900 refugees from North Korea, spoke to five North Korean defectors who shared about their hopes and thoughts on the second Trump-Kim summit.

"I hope people remember the 25 million North Koreans when they watch the summit between North Korea and the U.S.," Joseph Park told LiNK. "Those who’ve had to suffer the most due to the hostile relationship with North Korea are the North Korean people, not the regime."

Jessie Kim, a 27-year-old defector who escaped in 2011, said North Koreans don't even know the concept of basic human rights like the rest of the world.

"The one thing I want to tell the world about North Korea is that the people living there are ordinary people just like us," Kim said. "I hope we don’t forget about the North Korean people who can’t even claim their right to life."