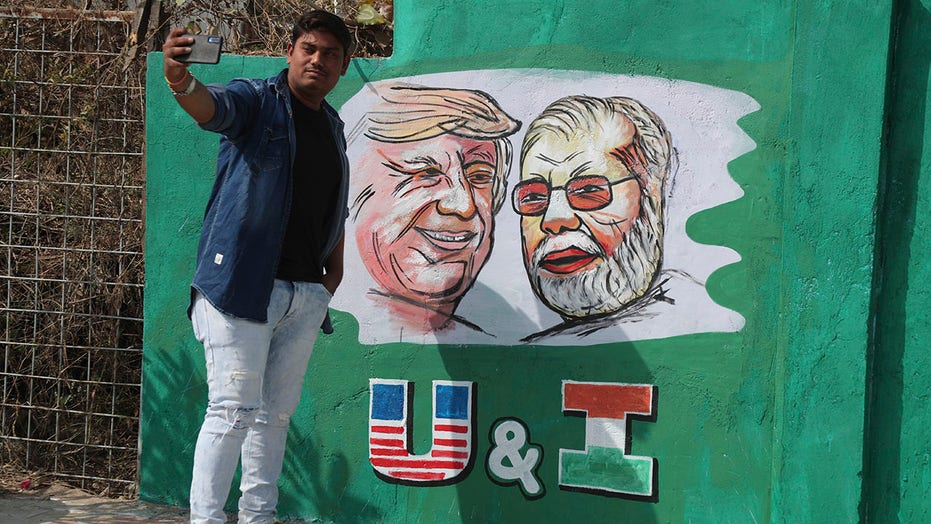 President Trump’s popularity in India is being celebrated with songs, prayers and statues ahead of his first visit to the south Asian nation – which has quickly constructed its own wall along a slum before the U.S. leader’s arrival.

Trump will make a two-day trip to India next week to attend an event called “Namaste Trump,” which translates to “Greetings, Trump,” at a cricket stadium in the city of Ahmedabad in Gujarat. Indian Prime Minister Narendra Modi was similarly greeted with a “Howdy Modi” rally in Houston last September.

Some locals have shared their love for the U.S. president as they prepare for his visit.

Krishna has prayed to a statue of Trump at his house in Konney village in the southern state of Telangana, India. (Reuters/Vinod Babu/File)

Bussa Krishna has worshipped Trump ever since the New York real estate mogul appeared to him in a dream four years ago, telling Reuters that he even prays to Trump.

“My love for him has transformed into reverence,” Krishna said. “That has given me immense happiness. Hence instead of praying to other gods, I started praying to him.”

Krishna, a real estate broker in his own right, transformed his home into a Trump shrine, scrawling the American leader’s name across a wall in his backyard where a life-size statue of the president stands, the outlet reported.

“I am facing difficulties because of my relatives,” Krishna said. “They tell me that I am disgracing them in society. I told them that just like you believe and worship Shiva, I believe and worship Trump. Neither of us can stop the other from doing so.”

An Indian man takes a selfie with portraits of U.S. President Donald Trump and Indian Prime Minister Narendra Modi painted on a wall ahead of Trump's visit.(AP Photo/Ajit Solanki)

Krishna isn’t the only Indian who displays his strong feelings for Trump.

Members of the Hindu Sena, a right-wing fringe group which says Trump shares their hatred of Islamic extremism, have been rehearsing a welcome song ahead of his visit, according to the outlet.

“We like Donald Trump because he openly spoke about India’s feelings,” Hindu Sena leader Vishnu Gupta said. “...He openly said that he would eliminate Islamic terrorism from its roots, that is why I am his fan.”

However, not everyone is pleased with Trump’s visit.

Indian workers constructed a wall in front of a slum ahead of Trump's visit to the city. (AP Photo/Ajit Solanki)

A hastily built 1,640-foot brick wall in front of a slum in the Gujarat state has stoked tensions ahead of Trump’s arrival, with critics saying it is meant to hide the area called home by more than 2,000 people.

In another slum near the cricket stadium, the 45 families living there were hit with eviction notices.

“We have been living here for the last 20 years and now we are suddenly being told to vacate because some important leader is visiting this city for a day,” said Sanjay Patani, a resident. “This is injustice.”

City officials deny the wall was built to conceal the slum, saying it was necessary for “security reasons” and also part of a “beautification and cleanliness drive.”

Trump, who has pledged to build a wall along America's border with Mexico to stop illegal aliens and drugs from entering the U.S., is visiting India on Feb. 24-25 in a bid to smooth relations strained by trade disputes.