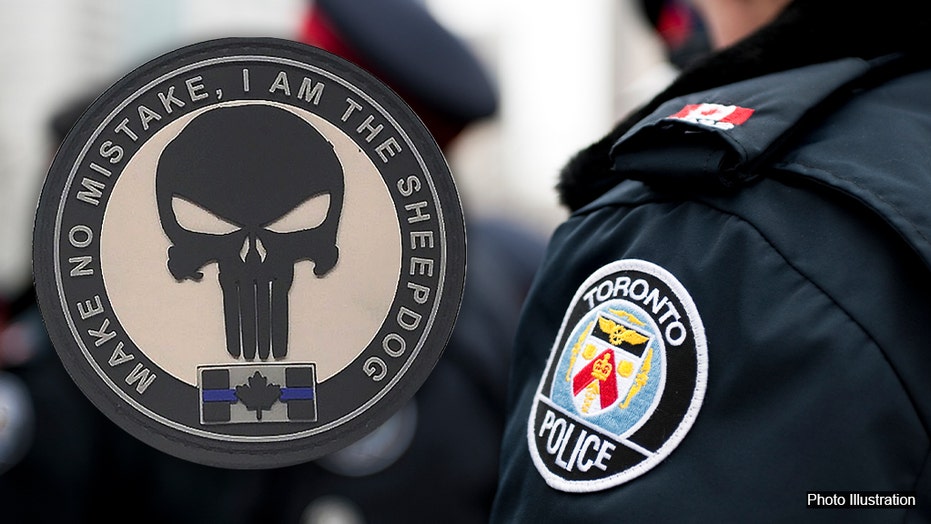 A Toronto police officer received public backlash Tuesday after he was spotted wearing a “Punisher” patch on his uniform during a press conference.

A Toronto Star reporter who was at the press conference was the first to tweet an image of the officer wearing the patch.

“Spotted this patch on one of the officers at this morning’s presser. Google tells me this is a motto popular among police, a fuller version of which is “I may walk among the sheep, but make no mistake, I am the sheepdog.” The sheep being civilians, presumably,” reporter Ben Spurr wrote.

“Has a different ring to it than "To Serve and Protect,” he added.

Connie Osbourne, a spokesperson for the Toronto police, told the Fox News the "officer wearing the patch has been identified and he has been directed to remove it immediately."

“It is not approved, nor appropriate, for him to be wearing it on his uniform. This is now a matter of internal discipline,” Osbourne said.

The patch features a black skull centered around the message: “Make no mistake, I am the sheepdog.” It derives from Marvel Comic’s anti-hero, “The Punisher,” and has been adopted as a pro-police symbol in recent years.

The Punisher character, whose real name is Frank Castle, is controversial within the Marvel universe for using his military training to murder – rather than bring to justice – the criminals who cross him. Consequently, the Punisher’s skull logo being adopted as a pro-police symbol has raised eyebrows.

In the wake of ongoing protests against police brutality sparked by the police custody death of George Floyd in May, The Punisher’s co-creator, Gerry Conway, started an initiative to place the logo in a different context.

“For too long, symbols associated with a character I co-created have been co-opted by forces of oppression and to intimidate Black Americans. This character and symbol was never intended as a symbol of oppression. This is a symbol of a systematic failure of equal justice. It’s time to claim this symbol for the cause of equal justice and Black Lives Matter,” Conway wrote in a statement announcing a clothing line that incorporates The Punisher’s logo into Black Lives Matter merchandise.

The proceeds from the merchandise sales go to the Black Lives Matter organization. He noted on Twitter that the designs were mostly done by "young artists of color."