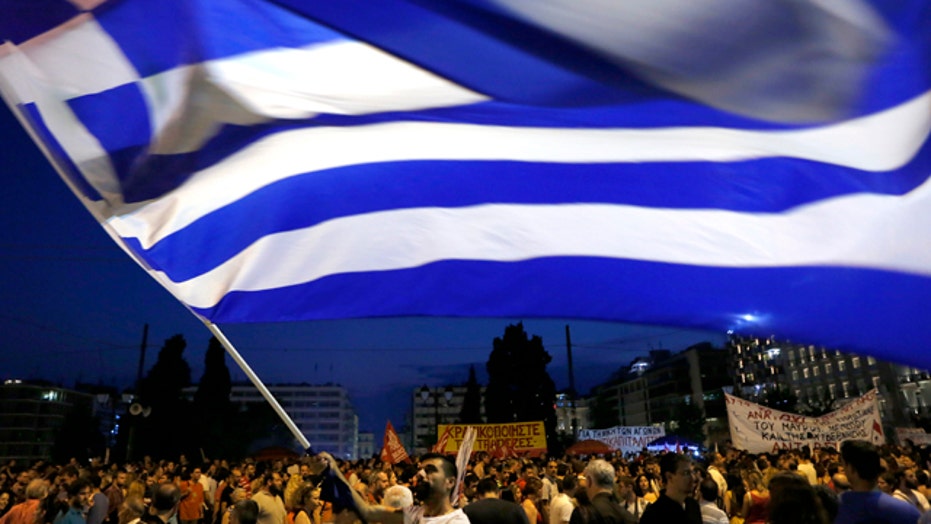 Greece’s failure to give its creditors in the 19-country Eurozone proof that it can deliver on its promises to implement tough austerity and reform measures in return for billions more in bailout money has finance ministers considering an alternate plan that would give Athens a “time-out” from the eurozone and possible debt write-offs, Reuters reports.

The ministers reportedly submitted a four-page document reviewed at the summit of eurozone leaders Sunday that includes a long list of conditions for Greece to get a program by offering two possible outcomes.

The first would be a eurozone-approved bailout, according to Reuters. The second reads: ``In case an agreement could not be reached, Greece should be offered swift negotiations on a time-out from the euro area, with possible debt restructuring,'' the wire service reports.

The news of a “time-out” plan comes as reports surfaced Saturday that Germany is preparing for Greece to be rejected from the eurozone. Greek officials have denied reports the country is about to leave the European Union.

Finance ministers canceled a European Union summit meeting Sunday in an effort to do everything it takes to get a deal done or to decide to eject Greece from the eurozone.

Should a deal fall through, The Telegraph reports the German government has prepared to negotiate a temporary five-year euro exit for Greece, giving the country humanitarian aid while it makes the transition.

The plan, backed by Germany’s finance ministry, gives Greece two options: either submit a proposal to make drastic changes like placing 50 billion euro in a trust fund of sorts to pay off its debts and have Brussels take over its public administration or agree to the temporary exit from the euro zone.

German Vice Chancellor Sigmar Gabriel said it was the only options Greece has in the matter as creditors voiced mistrust with Athens, a week after the Greek government held a referendum in which it urged voters to reject bailout conditions that it now has signed up to.

The Greek government denied the report. Theodoros Mihopoulos, who heads Greek Prime Minister Alexis Tsipras' office, said in a tweet that the report "is completely denied."

Early Saturday, Tsipras got the backing from Parliament on a package of economic reforms and further austerity measures, in hope that it would convince European creditors to back a third bailout of the country.

Still, the measures proposed, which include changes long-demanded by creditors -- such as changes to pensions and sales taxes -- weren't enough to unlock an agreement in Brussels. Following months of deteriorating relations, creditors are demanding firm legislative action to back up the proposals at the very least.

However, German Finance Minister Wolfgang Schaeuble lashed out against the Greek government, saying it will have to do a lot more than just say it wants to reform if it’s going to get more money.

"We will definitely not be able to rely on promises," he said. "We are determined to not make calculations that everyone knows one cannot believe in."

The Telegraph reports there is an open revolt among the euro zone’s 19-member states as a group of small creditors threatening to reject the rescue plan.

Finland is on the brink of withdrawing its negotiating mandate from the government, which would force creditors to set an emergency voting procedure to pass a new rescue deal. Finland’s True Finns party has threatened to bring down its young government if it supports a new Greek deal, according to the paper.

"It's still very difficult, but work is still in progress," said Jeroen Dijsselbloem, the eurozone’s top official, as he left the meeting.

One of the few supports Greece has in its fight to secure more money is France. Ministers have urged smaller, poorer eurozone countries to help Greece, according to The Telegraph.

French Finance Minister Michel Sapin is hoping to get confidence again to be able to agree to a rescue plan for Greece. He called the latest proposal a “brave” step forward.

The eurozone ministers have to give their blessing to Greece's bailout request to the European Stability Mechanism. Traditionally, eurozone ministers agree by mutual consensus, though in exceptional circumstances a unanimous vote may not be needed.

Greece has received bailouts totaling 240 billion euros in return for deep spending cuts, tax increases and reforms from successive governments. Though the country's annual budget deficit has come down dramatically, Greece's debt burden has increased as the economy has shrunk by a quarter.

The Greek government has made some form of debt relief a priority and will hope that a comprehensive solution will involve European creditors at least agreeing to delayed repayments or lower interest rates.

Tsipras has made much of the need for a restructuring of Greek debt, which stands at around 320 billion euros, or a staggering 180 percent or so of the country's annual GDP. Few economists think that debt will ever fully repaid. Last week, the International Monetary Fund said a restructuring was necessary for Greece.