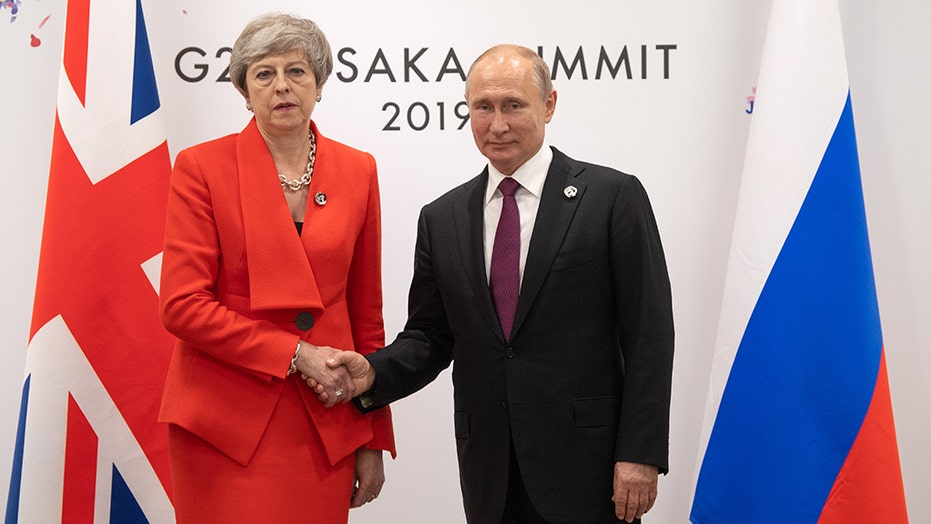 A stone-faced Theresa May delivered an icy greeting to Russian President Vladimir Putin on Friday as they met for the first time since last year’s Salisbury poisoning.

The outgoing British prime minister and Putin last met three years ago. The frosty relationship between the two countries was strained even further after the March 4, 2018 nerve agent attack on former Russian spy Sergei Skripal and his daughter Yulia. They survived after nearly being killed.

May all but avoided looking at Putin as they shook hands at the start of their meeting at the Group of 20 summit in Osaka, Japan.

According to Downing Street, May told Putin "there cannot be a normalization of our bilateral relationship until Russia stops the irresponsible and destabilizing activity."

Britain's Prime Minister, Theresa May, offered an icy greeting to Russia's President, Vladimir Putin, during a bilateral meeting on the first day of the G20 summit Friday in Osaka, Japan. (Photo by Carl Court/Getty Images)

Downing Street said May told Putin the poisoning was a “truly despicable act” carried out by two Russian military officers, the BBC reported.

She said the U.K. had irrefutable evidence that Russia was behind the attack. which also led to the death of a British woman, Dawn Sturgess, the BBC reported.

May wants the accused culprits to face justice.

"From our end, there is an understanding that we have to search for an instrument to try to bring our bilateral, trade and economic relationship to a normal situation. Otherwise, the situation is grave," Peskov added.

In an interview with the Financial Times, Putin again insisted that Russia had nothing to do with the poisoning and argued that bilateral ties are far more important than "the fuss about spies not worth five copecks."