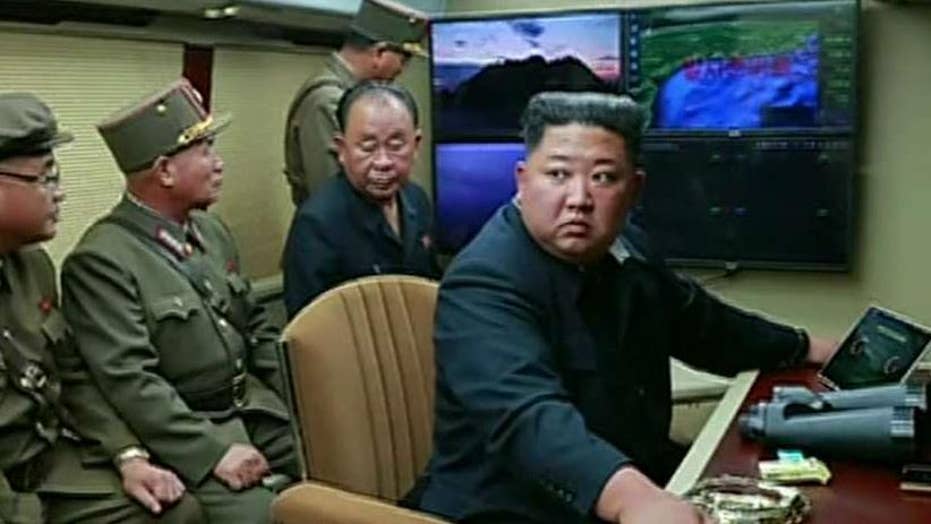 While North Korea routinely makes headlines for its missile tests, nuclear program and the various apocalyptic pronouncements of dictator Kim Jong Un, one of Pyongyang’s most horrific tools of abuse rarely gets a mention and is largely unchecked: the ongoing implementation of forced abortion.

Experts that spoke to Fox News said China is complicit in the abuse, and have said in cases where involuntary abortions aren't ordered, North Korean officials engage in outright infanticide.

“Terrifying reports from female defectors depict undergoing forced abortions after they fled to what they thought was freedom in China, only to be repatriated back to North Korea by authorities in China," said Olivia Enos, Senior Policy Analyst for Asian Studies at The Heritage Foundation. "Other women from North Korea recount having aborted babies born alive or giving birth in ordinary prison camps only to have border guards smother or drown their babies before their very eyes."

Dong Yon Kim, an analyst and journalist for Chosun News-Press and a former Air Force Officer for the Republic of Korea, added there has been no marked improvements with regards to North Korea’s human rights record in recent years when it comes to forced abortions.

“These [women] are treated like an animal and have been put through forced abortions and it is done in many ways,” he said. “This is inhumane and a serious problem.”

“Pregnant women can be made to lie on the ground. Then [guards] put a long and wide piece of wood on her stomach. They pick two people for the job. These two people could be the son of the woman, her husband or lover, or any relative. These men stand on top of the wooden board like a see-saw,” Kim said. “Using a burning iron is another method. The punisher carries a long piece of metal and lets it burn until red or yellow, then puts it into the pregnant woman. A woman can die from this punishment, and often, if she survives, she cannot walk properly.”

He recounted the haunting tale of one pregnant woman who escaped North Korea to China, but was later caught by authorities there and expelled to her homeland. After discovering she was pregnant, Kim stressed how she was “kicked multiple times and she lost her baby.”

And he says that's only a few of the horrors pregnant women endure.

“Babies are aborted without anesthesia. Some reported having soldiers jump on their stomach until the baby came out, others by having various instruments inserted, others still by having poisonous plants inserted in their vagina to kill the baby and induce labor,” Enos said.

Jin hye Jo wipes a tear as she testifies in Washington D.C. during a hearing of the UN-mandated Commission of Inquiry about human rights in North Korea. (AP)

A 2014 report delivered to the UN Rights Council underscored that “blood tests are routinely conducted on all repatriated women” and those found to be pregnant are made to endure abortions through a number of methods, from “inflicting trauma to the uterus through physical force to induce expulsion such as beating, kicking” to “forcing pregnant women to engage in heavy physical work to induce pre-term labor or premature separation of the placenta from the uterus” to mandating a concoction of chemicals and abortifacient herbs generally inserted into the vaginal cavity.”

The report also pointed to cases in which a mother was able to carry her baby to full-term – though with no medical assistance – but prison guards then suffocated or drowned the newborn.

A North Korean soldier looks at the south side as a South Korean soldier stands guard before U.S. Secretary of State Rex Tillerson arrives at the border village of Panmunjom, which has separated the two Koreas since the Korean War. (The Associated Press)

Unconfirmed reports surfaced in 2015 that North Korean healthcare workers – not guards or other authorities presiding over detention facilities – were given a directive to discontinue forced abortions in clinics. Enos pointed out, however, there is no data or defectors testimony that would support that such a policy was enforced.

Rape in the work camps is also a major problem and often lead to forced abortions. Babies conceived through rape, often by soldiers, are often aborted because sex is impermissible in the camps, therefore, the thinking goes, any child that might arise from such an encounter must be eliminated.

“Where this gets really barbaric is if the woman hides the pregnancy and wants to keep the baby – punishment is swift and heinous. If she is discovered, I have been told of accounts where the woman is killed as well as the baby,” he said. “I have also been told of accounts where the woman is tied to a tree, the baby is cut out of her stomach, shown the child before its throat is slit and then she is executed or left to bleed to death.”

A North Korean defector in 2017 forced to undergo abortion in detention. (UNTV)

Moreover, Human Rights Watch investigators in November said unwanted sexual contact and violence is so common that it has come to be accepted as part of ordinary life for females in the Hermit Kingdom. The watchdog also accused the government of “failing to investigate or prosecute complaints, or to provide protection and services to victims, and even asserts that the country is implausibly free of sexism or sexual violence.”

“The lack of rule of law and corresponding support systems for survivors leads most victims to remain silent,” the report stated. “To not seek justice and often not even talk about their experiences.”

Marta Hurtado Gomez, a spokesperson for Office of the United Nations High Commissioner for Human Rights, told Fox News that sexual violence remains an issue asked about and monitored in interviews with escapees.

“We have gathered accounts of cases of forced abortion in detention. This includes cases where detention officials reportedly sought to cause abortions through beatings or hard labor,” she said, noting the latest cases are from 2012. “There is often a delay in gathering up-to-date information as we have no access to the DPRK, so can only interview victims after they arrive in [South Korea] so it is not possible to say whether there has been a change or improvement in the situation related to forced abortions.”

In late December 2017, one defector shattered the silence that often surrounds such a practice by describing her own horrific ordeal, along with a plea for the world to act.

“Pregnant women were forced into harsh labor all day. At night we heard pregnant mothers screaming and babies died without ever being able to see their mothers,” Ji Hyeon-A chillingly recalled at a United Nations meeting on North Korea, explaining how, after running away to China, she was sent back three months pregnant and forced to have an abortion at a local police station, without any medication.

China has long been accused by international human rights bodies of having brazenly deployed forced abortions to enforce its former one-child policy.

“Forced abortions are prevalent in China due to the one-child, now two-child, policy. Family decisions are a personal, private matter, yet both China and North Korea insert themselves into those personal decisions when they institute draconian family planning policies and carry out forced abortions,” Enos noted. “They should be held accountable for these serious human rights violations.”

International human rights experts and activists say there is more that can be done to put a stop to forced abortions -- even in a very closed country such as North Korea.

“The U.S. should identify additional members, especially high-ranking members, of the North Korean border guard, and those responsible for enforcing the ordinary and political prison camp policies for sanctioning under Global Magnitsky. It should also be more vocal in condemning rights abuses in North Korea, including forced abortions, at the UN,” Enos saided. “Last year, the UN failed to hold a Security Council session on human rights in North Korea -- something it did every year annually since the UN Commission of Inquiry report was released. This should not happen again.”