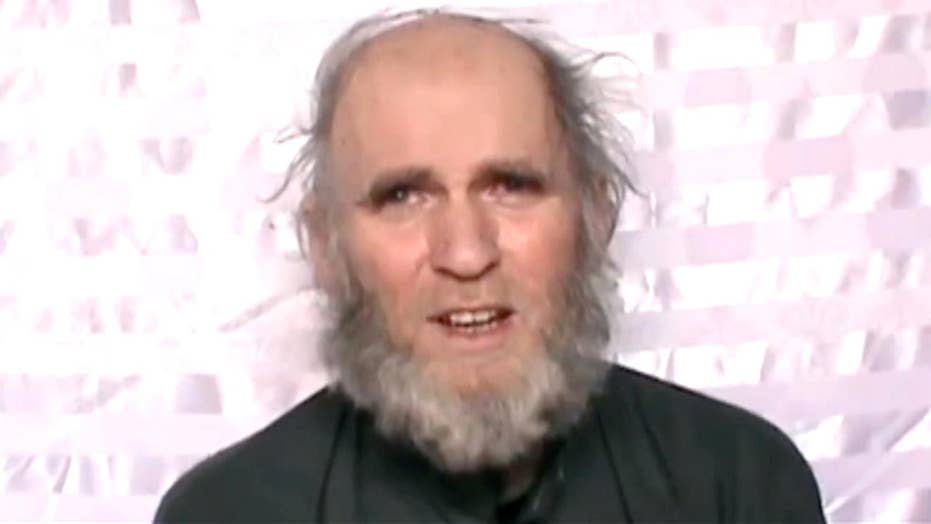 Kevin King, an American professor held hostage by the Taliban, is in poor health, according to a statement released by the extremist group on Monday.

“We have periodically tried to treat and care for him but since we are facing war conditions and do not readily have access to health facilities therefore we are unable to deliver complete treatment," the statement read according to CBS.

As a result, the Taliban is urging the United States to meet the group’s demands, adding that if "the illness of Kevin King becomes incurable or he loses his life... (we) will not be held responsible."

In August of last year, King and his Australian colleague Timothy Weeks were captured by the Taliban outside of the American University of Afghanistan in Kabul, where the two were teaching.

In response to the Taliban’s statement on Monday, the University said in a statement that both King and Weeks are “innocent victims of criminal abduction.”

“They came to Afghanistan to teach Afghan youth and contribute to building a peaceful Afghanistan. They have done no harm to anyone. We strongly urge the Taliban immediately to release Mr. King and Mr. Weeks unharmed,” the statement reads.

As the two professors continue to be held hostage, here’s what to know:

King, 61, and Weeks, 49, were kidnapped in Kabul by five gunmen in August 2016. The two were reportedly taken from their SUV on a main road near the University. According to a Guardian report at the time, the men were thought to be traveling from the school toward their residence.

King and Weeks are believed to be held by the Afghan Taliban-linked Haqqani network.

The Haqqani network was also behind the kidnapping of Caitlan Coleman and Joshua Boyle-- a U.S/Canadian couple who was released earlier in October when they were rescued by Pakistani forces. The couple was captured in 2012 and had three children while in captivity.

What’s happened since King and Weeks were captured?

Since their capture, the Taliban has released two videos of King and Weeks. The first, which was released in January on YouTube, shows the two in an undisclosed location asking then President-elect Trump for a prisoner exchange.

“If we stay here for much longer, we will be killed. I don’t want to die here,” Weeks said in the video.

In the second video, which was released in June, the two re-iterate their plea for a prisoner exchange on behalf of their captors.

“My captors treat me well. They treat me and my colleague Tim Weeks as their guests; but every prisoner’s final wish is to get freedom from the prison,” King said in June.

The U.S. government has previously agreed to Taliban demands of a prisoner swap. In 2014, the Haqqani group released Army Sgt. Bowe Bergdahl in exchange for five Taliban prisoners.

Prior to his capture, Bergdahl walked off his post in Afghanistan in 2009. Bergdahl has since pleaded guilty to desertion and misbehavior before the enemy.

What’s been the response from the U.S. and Australia?

There has been at least one attempt by U.S. forces to rescue King and Weeks, but it was unsuccessful.

A team of Navy Seals reportedly invaded a militant hideout in the mountains in eastern Afghanistan, missing the two hostages by just a few hours, according to the Guardian.

“We call for the immediate and unconditional release of Kevin King and all other hostages,” a spokesperson for the U.S. Department of State told Fox News in a statement on Monday.

“Taking and holding hostages is reprehensible and we condemn such actions in the strongest terms.  The U.S. government will never stop trying to recover them and other Americans held by criminal and terrorist networks around the world. We adopt a whole-of-government approach to recover U.S. citizen hostages abroad, and we leverage all diplomatic, military, investigative, and intelligence elements in support of our recovery efforts.”

“Our thoughts and prayers are with the families involved. Due to privacy considerations, we have no further comment,” the spokesperson added.

It is currently unclear if Trump will adhere to the Taliban's request for a prisoner swap.

After the release of the first video in January, a spokesperson for the Department of Foreign Affairs and Trade told the Australian Financial Review that the “Australian government has been working closely with other governments to secure the release of an Australian man kidnapped in Afghanistan in August 2016. We have also been providing consular support to the man's family, who have requested privacy. Out of respect for his family's wishes, and in the interests of his own safety and well-being, we will not be commenting further."