President Trump announced Saturday that he had canceled planned secret meetings at Camp David with Taliban and Afghan leaders after the Taliban claimed responsibility for a car bombing that killed a U.S. soldier, a Romanian soldier, and 10 civilians in Kabul earlier this week.

"Unbeknownst to almost everyone, the major Taliban leaders and, separately, the President of Afghanistan, were going to secretly meet with me at Camp David on Sunday," Trump tweeted. "They were coming to the United States tonight. Unfortunately, in order to build false leverage, they admitted to an attack in Kabul that killed one of our great great soldiers, and 11 other people. I immediately cancelled [sic] the meeting and called off peace negotiations. What kind of people would kill so many in order to seemingly strengthen their bargaining position?"

Trump added that if the Taliban cannot agree to a ceasefire, "then they probably don’t have the power to negotiate a meaningful agreement anyway."

"How many more decades are they willing to fight?" Trump asked.

The Trump announcement came a day after the U.S. envoy negotiating with the Taliban, Zalmay Khalilzad, completed two days of meetings in Qatar with Taliban lead negotiator Mullah Abdul Ghani Baradar and the commander of U.S. forces in Afghanistan, Gen. Scott Miller. On Monday, Khalilzad said an agreement had been reached "in principle" to begin a U.S. troop withdrawal  and only needed Trump's approval

Khalilzad has said the first 5,000 U.S. troops would withdraw from five bases in Afghanistan within 135 days of a final deal. Between 14,000 and 13,000 troops are currently in the country. But the Taliban, at their strongest since their defeat in 2001 after a U.S.-led invasion, want all of the approximately 20,000 U.S. and NATO troops out of Afghanistan as soon as possible.

Afghan President Ashraf Ghani has been shut out of the U.S.-Taliban negotiations, and during Khalilzad's visit to Kabul this week Ghani was shown the agreement but not allowed to keep it. The Taliban have rejected negotiations with the Afghan government, seeing it as a puppet of the U.S., though it has expressed willingness to meet with Afghan officials in their personal capacity. 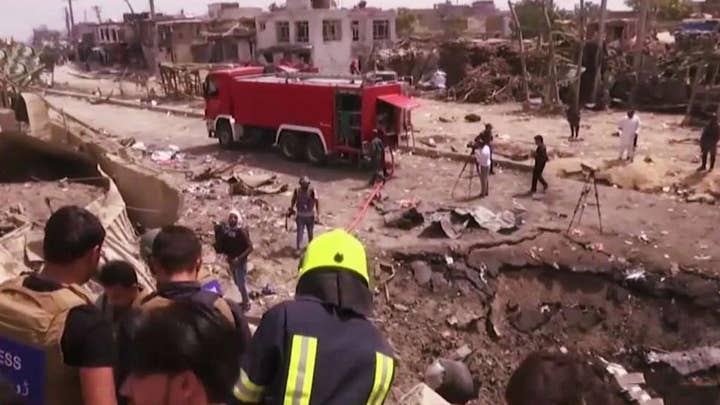 Ghani's government has echoed concerns by former U.S. officials that a full U.S. troop withdrawal that moves too quickly and without requiring the Taliban to meet certain conditions, such as reducing violence, could lead to "total civil war" such as the one that engulfed the country in the 1990s after a rapid Soviet pullout and before the Taliban swept into power.

"Peace with a group that is still killing innocent people is meaningless,” said Ghani, while presidential adviser Waheed Omer added: "Afghans have been bitten by this snake before."

The Taliban say that their surge in deadly attacks — including on the capitals of northern Kunduz and Baghlan provinces last weekend — is necessary to give them a stronger negotiating position in talks with the U.S., a stance that has appalled Afghans and others as scores of civilians are killed. 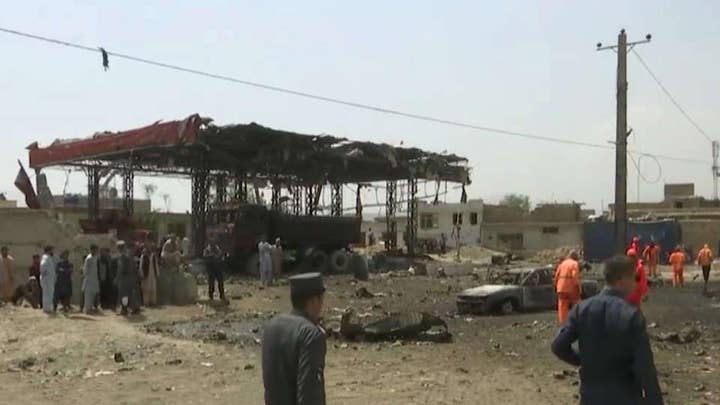 Thursday's explosion followed an attack late Monday that killed 16 people and over 100, mostly all civilians. Hours after the second explosion, the Taliban set off a car bomb outside an Afghan military base, killing four civilians.

The U.S. had hoped a deal with the Taliban would bring the militant group to the table for intra-Afghan talks to begin ahead of Afghanistan's presidential election on Sept. 28 — a vote that Ghani insisted must be held on time and not be swept aside by any kind of interim government. The U.S. is also seeking Taliban guarantees that they will not allow Afghanistan to become a haven from which extremist groups such as Al Qaeda and the local affiliate of the Islamic State group (ISIS) can launch global attacks.