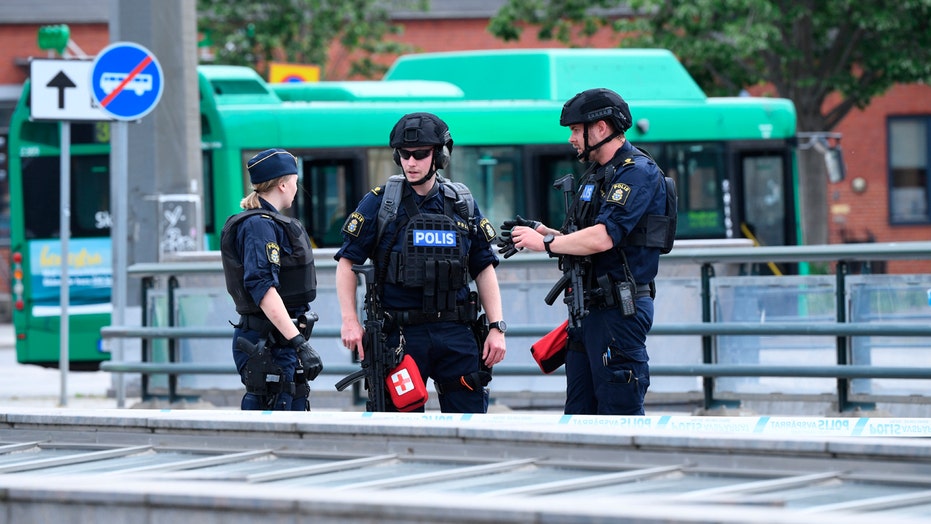 STOCKHOLM – A man who was banging a bag on the ground and claiming to have a bomb was shot by Swedish police officers at the central train station in Malmo on Monday, officials said.

The incident happened shortly after 10 a.m. at the station when authorities were alerted the man was behaving in a menacing way.

"He was screaming at the top of his voice and threatening that he had a bomb," a witness told the Sydsvenskan newspaper.

BANK ROBBER STRIKES IN ISRAEL, THREATENING TELLERS WITH AVOCADO HE CLAIMED WAS GRENADE

Another witness, Malmo resident Fernando Valarino, told the Associated Press he was at the station waiting for a train when he saw a tall, bald man in a dark purple raincoat who appeared to be about 30 years old banging a duffel bag on the ground.

At first, he couldn't make out what the man was saying but then heard him yell "I've got a bomb" in English.

A police officer cordons off an area at the scene where police shot and wounded a man at Malmo central station, Sweden. (Johan Nilsson/TT via AP)

"He tried to run, and shots were fired. I definitely heard three shots, but maybe there were four," Valarino told the AP.

Police spokeswoman Evelina Olsson told the AP authorities evacuated the station as a bomb squad searched the building, but found nothing dangerous.

Swedish police say officers have shot and wounded a man who was threatening people at a train station. (Johan Nilsson/TT via AP)

"We don't know if he had a bomb, but probably not. It looks like it was nothing serious," Olsson told The AP.

Officers shot the man in both legs and he remains hospitalized but has so far been unwilling to explain his actions to police, she added

"We are still unsure of who he is," she said.