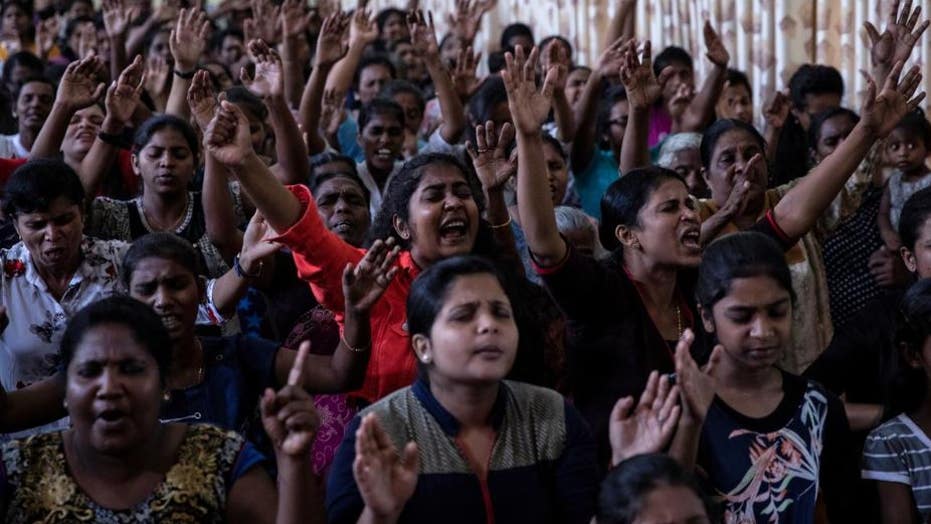 Two weeks after suicide bombers killed 250 and wounded 500 in coordinated attacks at Sri Lankan churches and hotels, worshippers filed slowly and peacefully into a community hall in the town of Batticaloa on Sunday.

This week, a dozen gun-toting soldiers reportedly stood guard outside the building as survivors of the horrific terrorist attack were joined by several hundred other Christian worshippers.

Some walked in on crutches, others clutched Bibles.

“Come to our protection in this world where we are being hit by waves,” their voices sang out in Tamil, reports Reuters.

Zion Church members pray at a community hall in Batticaloa, Sri Lanka, May 5, 2019. Their church was bombed on Easter Sunday.

The terrorist attacks were perpetrated by Islamist militants, according to Sri Lankan officials. But Islamic State claimed responsibility without providing any evidence.

Reuters reports that the evangelical Zion Church would need more repairs before it could be used again. There were also no services at St Sebastian’s Church in Negambo, where at least 102 people perished.

However, a Mass was held behind closed doors at St. Anthony’s Church in Colombo, the third church bombed that day.

“Save us from the Satans who are trying to destroy our nation,” the Christian worshippers in Batticaloa reportedly chanted.

Witnesses have said that the suicide bomber in Zion Church stood close to a generator to maximize the force of the blast, which killed 14 children and several dozen worshippers at the low-income church.

An injured member of Zion Church, which was bombed on Easter Sunday, cries as she prays at a community hall on May 5, 2019.

“Why does the Lord take us through this fire?” Reverend Roshan Mahesan said, his voice breaking, after about an hour of singing.

Worshippers said prayers for the injured and tried to make sense of the unspeakable attack.

Sumathi Karunakaran, a 52-year-old homemaker, received a volley of shrapnel on the upper left side of her body before she escaped by climbing over a wall. Her eye was bandaged and her arm was in a sling, but she still attended.

Members of Zion Church, which was bombed on Easter Sunday, pray at a community hall in Batticaloa, Sri Lanka, May 5, 2019. (Reuters)

“I will keep on coming,” Karunakaran, whose 22-year-old daughter Uma Shankari was still undergoing emergency care from injuries sustained in the blast, told Reuters.