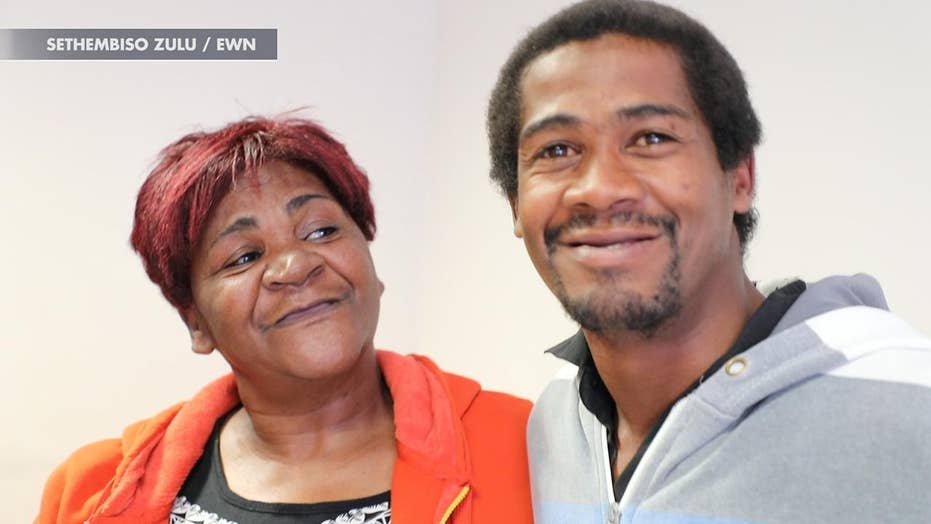 Raw video: Jane Daniels is reunited with her son Denzil, who went missing six years ago in Cape Town and was presumed dead, after he was recently found in the neighboring country Eswatini.

The pictures and footage only scratch the surface of the tale: wide smiles, and the tears of joy of a mother and her son, reunited after six years.

Six years ago, Jane Daniels, 60, from Delft, near Cape Town, South Africa, was distraught when her son, who is mentally challenged, disappeared.

When the police came up with no leads, after three years, Denzil was presumed dead, and a memorial service was held.

But two weeks ago, police in the neighboring country of Eswatini, formerly called Swaziland, carried out a routine stop and search of a man who was found rummaging through trash outside a supermarket. He gave them an address in Delft – the Daniels’ home. The Eswatini police sent a photo of Denzil to the Cape police missing persons’ unit, and Warrant Officer Michael Daniels – no relation – took it to Mrs. Daniels and asked her if she knew the man in the photo.

Jane Daniels, a pensioner in Delft, near Cape Town, is reunited with her son Denzil after he disappeared six years ago (LAUREN ISAACS / EWN)

“My heart is going out for her. We should help this woman, because when we brought the news to say your child is in Swaziland, she just fainted," he said.

But Mrs. Daniels couldn’t afford to make the 2,200-mile round trip to collect her son, now 30, who was being looked after by the Eswatini police.

Fortunately, radio and multimedia journalist Lauren Isaacs of South Africa’s Eye Witness News (EWN) came to the rescue. A Delft pastor appealed to Isaacs for help, and the reporter visited the mother.

“I saw the desperation on her, and her poor circumstances.," Isaacs told Fox News. “For three days I called businesses begging for money”.

“In 90% of missing persons cases, it doesn’t end well. It gets to us, I needed to get help for this family."

Mrs. Daniels couldn’t afford to make the 2,200 mile round trip to collect her son, who was being looked after by the Eswatini police, and was in distress: “I want to hug him and keep him in my arms, and tell him that every day I cried for you.” (LAUREN ISAACS / EWN)

The reporter also called humanitarian aid group the Gift of the Givers, who not only agreed to become the main funders of the trip, but even provided the son with new clothes.

There are no direct road transport links between Eswatini and Cape Town. So Warrant Officer Daniels and a police colleague took vacation time, and used the policeman’s private car for the two-day journey to reunite mother and son at the border.

On seeing her son, Jane repeatedly hugged him and kept saying: “My son, my son, I am so happy to see you.”

Denzil for his part said he had hitchhiked to Eswatini where he made friends and did odd jobs to make a living.

"I helped people to earn some money, selling clothes and stuff like that... I missed my family."

He later told reporters he was originally heading to Wellington, just 35 miles from Delft, but "then I moved further and further."

He added that he now hopes to find work and act as the family's breadwinner after his father died two years ago.

Officer Daniels said he’d go the extra thousands of miles again in his car in a heartbeat: “People are very negative about the police, but there are good police officers who go out of their way to help the community”.