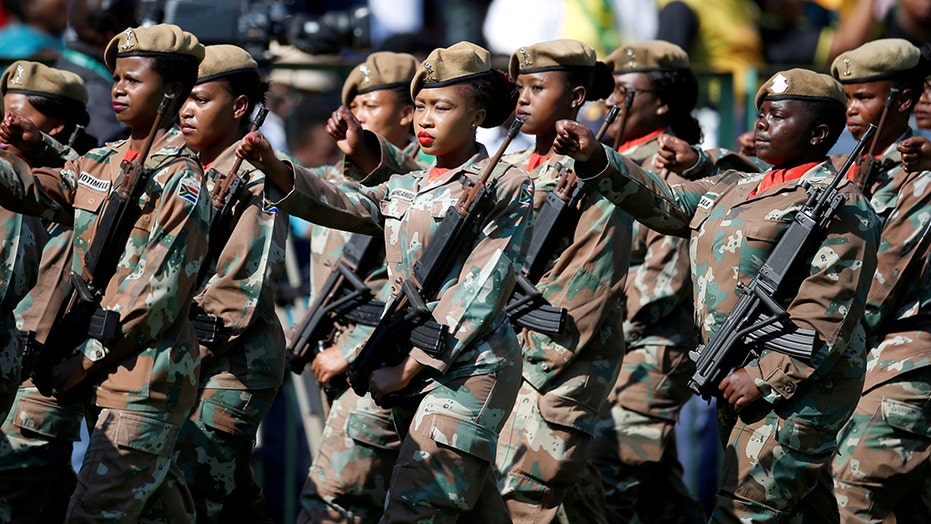 South Africa is sending in the big guns to wrest back control of some of the most impoverished neighborhoods of Cape Town - announcing a three-month deployment of the army aimed at tackling spiraling gang-related violence that has claimed the lives of more than 1,500 this year so far.

With that, the minister announced the army will be sent into the city’s Cape Flats suburbs to help stop the latest spate of murders.

As night descended on Cape Town, a  transport aircraft brought in troops from outside the city to prepare for deployment.

HUNDREDS OF MURDERS THREATEN CAPE TOWN'S TOURIST MECCA IMAGE: 'WE ARE LIVING IN A WARZONE’

Armored military vehicles and troops in full combat gear will be on these city streets for up to three months in an attempt to combat what has become a gangster’s battleground.

Since the beginning of the year, at least 1,600 people have been unlawfully killed in the Cape Flats. More than half that number have been shot or stabbed in what’s believed to be gang-related killings in extremely low-income neighborhoods near Cape Town International Airport.

Soldiers parade at the inauguration of Cyril Ramaphosa as South African president at Loftus Versfeld stadium in Pretoria, South Africa May 25, 2019. (Reuters)

Reaction on the streets to the news that the army is coming in has been generally favorable.

“Now the children can go to school, now people can go to work,” one resident said.

Around the time the minister was in parliament, gunfire was heard on the flats, and when it ended, the bodies of two young men were reportedly found.

A full brigade of the South African National Defence Force, with support elements, is being drafted into these troubled city streets. The army won’t give numbers,  but spokesperson Siphiwe Dlamini said they were "there to support police”.

Specifically, it’s understood the army will man roadblocks, use air support - mostly helicopters - to observe, carry out patrols on foot and in vehicles, and assist in identifying illegal drug manufacturing laboratories.

Dlamini said they will ensure each area goes into lockdown while police and troops search in many cases house-to-house to try and root out criminals: “No-one goes in, no-one goes out.”

SOUTH AFRICAN WOMAN REUNITED WITH SON SIX YEARS AFTER HE DISAPPEARED AND WAS TRACKED DOWN 1,000 MILES AWAY

In response to concerns that the act of bringing heavily-armed troops into gangland strongholds could escalate the violence, Dlamini bluntly responded: "People’s lives have already been lost”.

The police minister was under intense pressure to take significant action to stop the deaths.  The streets and open spaces here have become a fatal chessboard of turf wars amongst the city’s notorious gangs. Gang lords in jail are said to be directing terrifying operations in these suburbs.

The City of Cape Town, which has repeatedly called for the army to be deployed, has welcomed the news that they are going in, but says it should have happened earlier, before “hundreds and hundreds of unnecessary deaths”.

“The crime statistics in these communities have truly reached a state of emergency” said Cape Town’s Safety and Security mayoral committee member JP Smith. He adds that the crime figures “ threaten the stability and reputation of the city as a whole”

City officials point out that none of the gang violence is happening in tourist areas, but there are concerns that Cape Town’s international reputation, particularly with tourists, could be harmed because the violence has been happening within the city’s borders.

Understaffed, under-qualified and allegedly frequently corrupt local police have been unable to stop the death rate from becoming, as one city official called it, “stratospheric”.