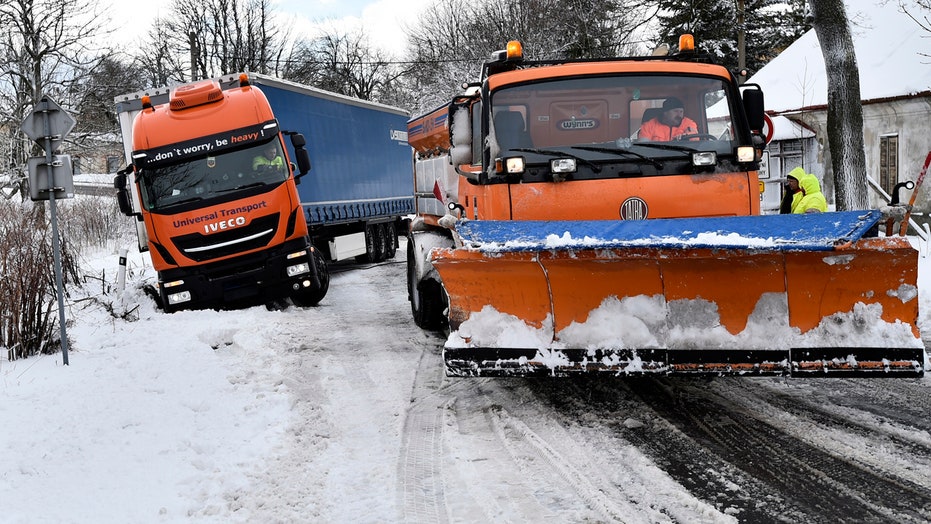 A series of winter storms across central and eastern Europe claimed another life on Thursday after an elderly man was found dead in his snow-trapped car in Serbia.

The spate of blizzards and strong winds combined with heavy rain and snow have left at least three people dead across the region.

Serbian police said Thursday they found a man's body while rescuing around 20 people, including five children, from their blocked cars on a road the southwestern part of the country.

A snowplow pulls a truck stranded along a snow-covered road in the village of Naklerov, Czech Republic, Wednesday, Feb. 5, 2020.

High snow drifts caused by strong winds have also blocked roads and houses in the area.

The issues on Thursday came after two people were killed in the storms on Wednesday. In Slovakia, a bus stop was overturned by the winds in the western town of Myjava, killing one child and seriously injuring another, police said.

Authorities across eastern Europe have issued warnings for strong winds, heavy rain and snow that toppled trees, damaged buildings and closed roads throughout the region. (Ondrej Haket/CTK via AP))

The Czech Republic reported major disruptions caused by snow, including a tree that fell on a road north of Prague, killing the driver.

Fallen trees and damaged roofs across Croatia caused more than 100 calls for services, as wind gusts overturned trucks and blocked sea traffic along the Adriatic Coast.

The region also faced another disruption besides heavy precipitation. A 4.2-magnitude earthquake was reported early Thursday north of the southeastern town of Knin, Croatia. No injuries or damage were reported.

A woman walks through an underground passage during a rainy day in Belgrade, Serbia, Wednesday, Feb. 5, 2020. Weather forecasts predict changeable weather during the next few days. (AP Photo/Darko Vojinovic)

Romania also reported a night of strong winds and blizzards: an eastbound highway remained closed on Thursday, around 30 trains were canceled, a number of villages have been left without electricity while numerous trees fell down.