Phares: Trump in right direction on terror, has own style

Terror expert and former Trump adviser Walid Phares sounds off on president referring to erroneous story while giving support to Spain after attack, says he is naming terror for what it is and getting out in front of it

Police in Spain announced early Friday they killed five people in a suspected second terror attack in Cambrils, hours after a van rammed into a crowd about 70 miles away in Barcelona, killing at least 13 people.

State-run broadcaster RTVE reported the suspects attempted to carry out a similar attack to the one in Barcelona, by driving a vehicle into pedestrians. It said seven people were injured — two seriously — by the suspects.

The Catalan government says an attack in the seaside resort town of Cambrils has been linked to the vehicle attack in Barcelona. The region's Interior Minister Joaquin Forn told local radio RAC1 early Friday that the Cambrils attack "follows the same trail. There is a connection."

He did not explain what connected the attacks.

Meantime, authorities were on the hunt for the van driver that killed at least 13 people and injured more than 100. It was not immediately clear how the suspects killed in Cambrils may have been connected to the Barcelona attack.

At least three people have been arrested as suspects in the Barcelona incident, according to the regional president of Catalonia. One of the suspects is a Spanish national from Melilla, and the other is a Moroccan citizen who lived in Spain legally.

ISIS claimed responsibility for the terror attack on Thursday through its propaganda arm, according to SITE Intel Group.

"The perpetrators of the attack in #Barcelona are Islamic state soldiers and carried out the operation on command of [ISIS' leader] of targeting coalition countries," the ISIS release stated.

A senior police official said the van attack is connected to a gas explosion inside a house in the town of Alcanar Wednesday, in which one person was killed and seven were injured.

Authorities confirmed that police fatally shot the driver of a vehicle that drove through a police checkpoint and struck two officers earlier, but a Catalan police official said the dead driver "doesn't have any connection with the terrorist attack we are investigating."

Police officers tell members of the public to leave the scene on a street in Barcelona, Spain, Thursday, Aug. 17, 2017. (AP Photo/Manu Fernandez)

Police initially named Driss Oukabir, the Moroccan, as a suspect in the attack. However, local media are reporting a man with that name told police that his identification documents were stolen, possibly by his younger brother.

The white van jumped onto a promenade and sped through a pedestrian zone on Las Ramblas of Barcelona, the famous main pedestrian walk way that crosses the city. The van swerved from side to side as it plowed into tourists and residents.

"It was clearly a terror attack, intended to kill as many people as possible," senior police official Josep Lluis Trapero said at a news conference.

RTVE reported that investigators think two vans were used — one for the attack and a second as a getaway vehicle.

Police killed a gunman in a shootout a few miles from Barcelona soon after the crash, El Mundo newspaper reported. However, police said later the gunman was not linked to the terror attack.

The scene in Barcelona.

Local media originally reported two men involved in the attack had been holed up in a bar, but that was dispelled by Catalan police.

"We are a strong city in its diversity and values. Barcelona is a city of peace, of dialogue, of democracy, valient, open to the world. The cowards that have tried to plant terror will not get away with it," Colau said.

"London, Brussels, Paris and some other European cities have had the same experience. It's been Barcelona's turn today," said Carles Puigdemont, the head of the regional government.

Prime Minister of Spain Mariano Rajoy tweeted that he is going to Barcelona. 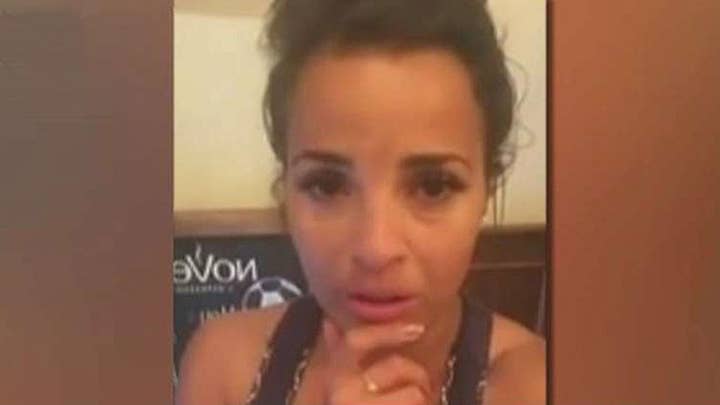 A grisly video of the incident appeared to show at least five people lying motionless on the ground, with legs twisted and heads bloodied.

Footage from reporters on the ground shows armed officers combing a market.

Albert Tort, a 47-year-old nurse who lives near Las Ramblas, told El Pais that what he saw at the scene was an "authentic disaster."

"Police would not let me go through but I identified myself as a nurse and I went in," he said. "What I saw was an authentic disaster. I counted at least 6 dead, I tried to revive a young [man] but it was impossible."

"I heard a lot of people screaming and then I saw the van going down the boulevard," another witness, Miguel Angel Rizo, said. "You can see all the bodies lying through Las Ramblas. It was brutal. A very tough image to see."

Barcelona resident Keith Fleming told the Associated Press he was watching television in his building on a side street just off Las Ramblas when he heard a noise and went out to the balcony to investigate.

Fleming said he saw "women and children just running and they looked terrified," he then heard a bang, possibly from someone rolling down a store shutter, as more people raced by.

The American living in the Spanish city said police arrived, and pushed everyone a full block down the street. He says the officers are still there with guns drawn and riot police are stationed at the end of the block.

President Trump condemned the attack, saying in a tweet, "The United States condemns the terror attack in Barcelona, Spain, and will do whatever is necessary to help. Be tough & strong, we love you!"

Speaking from Panama, Vice President Pence called the day "tragic." He acknowledged that ISIS took credit for the attack, and said "whoever is responsible should know, together with our allies, we will punish those responsible" and rid "Islamic terror" from the world.

"This latest attack, the worst terror attack on Spanish soil since the 2004 Madrid train bombings, shows us again that radical Islamic terrorism is one of the greatest threats that we face today," Pence said.

"ISIS has taken credit for this barbaric attack, but whoever is responsible should know that the United States of America, together with our allies, will find and punish those responsible and drive the evil of radical Islamic terror from the face of the Earth."

Facebook has activated its Safety Check feature that lets users notify friends and family that they are safe following the Barcelona attack.

Barcelona's tourism association has offered rooms in area hotels to tourists who have been displaced by the attack.

The U.S consulate in Barcelona said on Twitter it was "aware of a reported incident at Las Ramblas in Barcelona. Please avoid the area and monitor local police @mossos for updates."

"Americans in Spain: If you are safe, be sure to notify friends and loved ones. If you use social media, be sure to update your status," the consulate tweeted.

The National Counterterrorism Center, the government hub for threat analysis, confirmed to Fox News the center is monitoring the events in Barcelona and note the use of a vehicle as a weapon.

TRUMP CONDEMNS BARCELONA TERROR, SAYS US 'WILL DO WHATEVER IS NECESSARY TO HELP'

The Department of Homeland Security said Acting Secretary of Homeland Security Elaine Duke has been briefed on the situation. "DHS has reached out to Spanish authorities, and the Department is standing by to support our allies as they respond to and recover from this horrendous attack. Our thoughts and prayers are with the victims and those affected," the agency said in a statement.

Spain has been the target of numerous terror attacks in the last few years, drawing the attention of the U.S. State Department.

The attack was the country's deadlist since 2004, when Al Qaeda-inspired bombers killed 192 people in coorindated attacks on Madrid's commuter trains.

Since July 2016, vehicles have been used to ram into crowds in terror attacks across Europe, killing well over 100 people in Nice, Berlin, London and Stockholm.

Las Ramblas is a packed tourist area in central Barcelona whose central feature is a broad promenade leading to the water. The stretch is lined with numerous shops, restaurants, a sprawling market and Gaudí architecture.

People walk down a wide, pedestrianized path in the center of the street, but cars can travel on either side of the area.