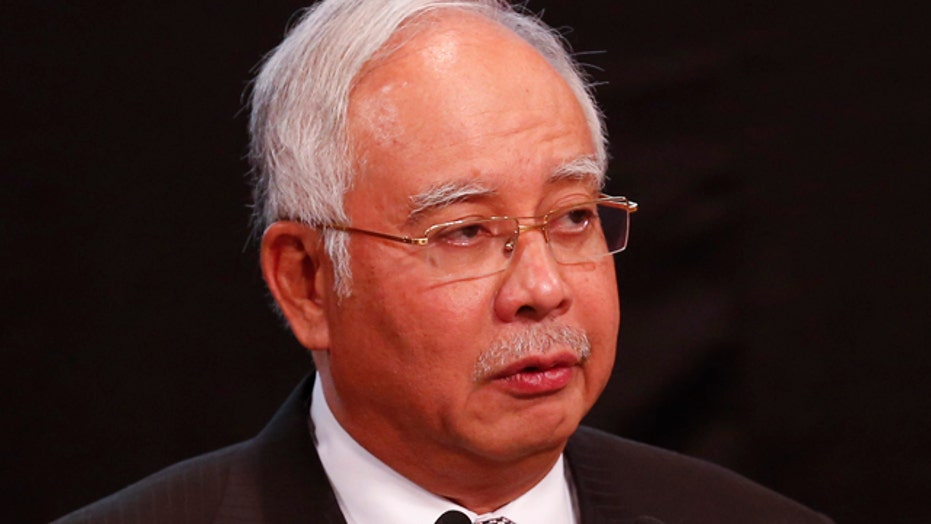 Najib Razak says new analysis of satellite data indicates the plane went down in a 'remote location, far from any possible landing sites'

Chinese family members of those aboard Malaysia Airlines Flight 370 on Monday called the airline and the nation's government the "true murderers" of the plane's victims, accusing authorities of concealing facts after the flight vanished.

Around 10 family members calling themselves the “committee for family of passengers of MH370” spoke to the media at a press conference from the Beijing hotel where relatives have been staying for the past two weeks since the flight vanished, Reuters reported. The statement came after Malaysian Prime Minister Najib Razak, citing a new analysis of satellite data, said the plane had likely crashed in the southern Indian Ocean.

"Their attempts at searching (the plane) wasted a large amount of human power and resources, losing the most valuable time for rescuing them,” an unidentified relative of one of the flight’s passengers said. “If we are to remember our 154 relatives, we have lost their precious lives. So Malaysia Airlines, the Malaysian government and the Malaysian military are the true murderers of our family members.”

The response comes as authorities turn to locating the wreckage and the plane’s black box, although Australian officials said they were suspending search efforts on Tuesday due to poor weather conditions in the area.

Razak gave no indication of exactly where in the Indian Ocean the plane was last heard from, but searchers have sighted possible debris in an area about 1,240 miles southwest of Perth, and he said more details would be released Tuesday.

The hunt is now considered a race against time because the battery life of the "pinger" in the black box is running out and may have less than two weeks left.

Flight MH370 vanished from civilian radar screens less than an hour after take-off from Kuala Lumpur for Beijing with 239 people - more than half Chinese nationals - on board on March 8.

“Malaysian Airlines, the Malaysian government, and the Malaysian military, instead of giving us real facts, kept delaying the facts at all cost, concealing and hiding the truth, attempting to deceive and cheat the family of the passengers, and attempting to cheat the people of the entire world," said another family member who refused to identify himself.

Shortly before Razak’s announcement, relatives of the passengers were booked on charter flights to take them to Australia, sources told Sky News. An emergency meeting between families and Malaysia Airlines officials took place in Beijing, Razak said.

“For them, the past few weeks have been heartbreaking. I know this news must be harder still,” Razak said. Sky News reporters said relatives were screaming and in tears as they were told the news and one person was seen being rolled out in a stretcher.

"Malaysia Airlines deeply regrets that we have to assume beyond any reasonable doubt that MH370 has been lost and that none of those on board survived," the airline said in a text message to the families, according to The Telegraph.

In a statement posted on Malaysia Airlines' website, the company said it offers its "sincere thoughts, prayers and condolences to everyone affected by this tragedy."

Earlier Monday, Australian and Chinese search planes spotted more objects in the southern Indian Ocean that were identified as possible debris from the missing jet, which was carrying 227 passengers and 12 crew members and was due to fly from Kuala Lumpur, Malaysia, to Beijing on the morning of March 8.

Australian Prime Minister Tony Abbott said the crew of an Australian P3 Orion plane had located two objects in the search zone -- the first gray or green and circular, the second orange and rectangular. The crew was able to photograph the objects, but it was unclear if they were part of an aircraft.

"They could be flotsam," Abbott said in Canberra. "Nevertheless, we are hopeful that we can recover these objects soon and that they will take us a step closer to resolving this tragic mystery."

An Australian Navy supply ship, the HMAS Success, was on the scene Monday trying to locate and recover the objects. Malaysian Defense Minister Hishammuddin Hussein said the vessel could reach them by Monday night or Tuesday morning.

Separately, the crew aboard one of two Chinese IL-76 aircraft combing the search zone observed two large objects and several smaller ones spread across several square miles, Xinhua News Agency reported. At least one of the items -- a white, square object -- was captured on a camera aboard the plane, Chinese Foreign Ministry spokesman Hong Lei said.

China has redirected the icebreaker Snow Dragon toward their latest find, and that ship was due to arrive in the area early Tuesday. Six other Chinese ships have been directed toward the search zone, along with 20 fishing vessels, Lei said.

Australia said a U.S. Navy plane searching the area Monday wasn’t able to locate the objects, according to Reuters.

Despite the reported sightings of objects, there still has not been one confirmed sighting of debris from the missing plane.

The U.S. Pacific command said Monday that it was sending a black box locator in case a debris field is located. The Towed Pinger Locator, which is pulled behind a vessel at slow speeds, has highly sensitive listening capability so that if a crash site is located, it can hear the black box pinger down to a depth of about 20,000 feet, according to Cmdr. Chris Budde, a U.S. 7th Fleet operations officer.

"This movement is simply a prudent effort to pre-position equipment and trained personnel closer to the search area so that if debris is found we will be able to respond as quickly as possible since the battery life of the black box's pinger is limited," Budde said.

There was no sign the move was made because of any break in the mystery, but rather was done as a preparation.

Australian Maritime Safety Authority's (AMSA) rescue coordination center said the search area was expanded from 22,800 to 26,400 square miles and that two Chinese Ilyushin IL-76 planes had joined the search from Perth, increasing the number of aircraft to 10 from eight a day earlier.

It said the weather in the search area, about 1,550 miles southwest of Perth, was expected to deteriorate with rain. On Tuesday, a cold front was expected to move through the search area from the west, bringing showers, more low clouds and less visibility. Tropical Cyclone Gillian, which is further to the north, will not impact the area.

The southern Indian Ocean is thought to be a potential area to find the jet because Malaysian authorities have said pings sent by the Boeing 777-200 for several hours after it disappeared indicated that the plane ended up in one of two huge arcs: a northern corridor stretching from Malaysia to Central Asia, or a southern corridor that stretches toward Antarctica.

“This is a remote location, far from any possible landing sites," Razak said at a press conference. "It is therefore with deep sadness and regret that I must inform you that, according to this new data, that flight MH370 ended in the southern Indian Ocean.”

Malaysian authorities have not ruled out any possible explanation for what happened to the jet, but have said the evidence so far suggests it was deliberately turned back across Malaysia to the Strait of Malacca, with its communications systems disabled. They are unsure what happened next.

Authorities are considering the possibilities of hijacking, sabotage, terrorism or issues related to the mental health of the pilots.

Malaysia's police chief, Inspector General Khalid Abu Bakar, reiterated at a news conference Monday that all the passengers had been cleared of suspicion.

But he said the pilots and crew were still being investigated. He would not comment on whether investigators had recovered the files that were deleted a month earlier from the home flight simulator of the chief pilot.

Malaysia Airlines chief executive Ahmad Jauhari Yahya said co-pilot Fariq Abdul Hamid had just transitioned to flying Boeing 777s from other commercial planes and the missing flight was his sixth on that type of aircraft.

Razak said authorities will be holding another press conference Tuesday with further details about the satellite data analysis.