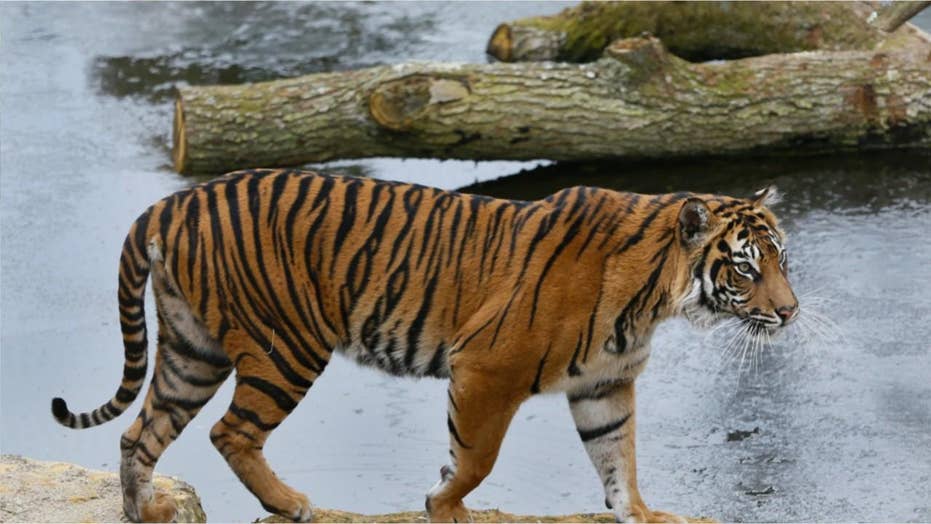 A meeting between two rare Sumatran tigers at London Zoo had a tragic end when the male animal shocked its handlers and killed his prospective mate.

A meeting between two rare Sumatran tigers at London Zoo had a tragic end when the male animal shocked its handlers and killed his prospective mate.

Zoologists said that 10 days before the fatal meeting, they kept newly arrived tiger Asim in a separate enclosure from Melati, the female tiger who was supposed to become his mate.

They wanted to give the two tigers time to get used to each other’s presence and smells before officially meeting in the same enclosure.

However, nothing could prepare them from what happened when Asim and Melati met.

The zoo said its experts had been carefully monitoring the two animals that they hoped would eventually breed as part of a Europe-wide tiger conservation program for the endangered Sumatran subspecies.

This image taken from video and made available by London Zoo, shows Sumatran tiger named Asim at London Zoo, Wednesday Jan. 30, 2019. Asim was recently transferred to London from a Danish safari park to serve as a new mate for female resident tiger Melati. (London Zoo via AP)

"Their introduction began as predicted, but quickly escalated into a more aggressive interaction," the zoo said.

The shocked handlers tried to use loud noises, flare, and alarms to try to distract the two tigers, but to no avail.

They managed to put Asim, 7, back in a separate paddock, but by that time Melati, 10, was already dead.

“Everyone here at ZSL London Zoo is devastated by the loss of Melati and we are heartbroken by this turn of events,” the zoo said in a statement.

Asim's arrival at the zoo last week had been trumpeted in a press release showing him on the prowl and describing him as a "strapping Sumatran tiger."

Head tiger keeper Kathryn Sanders said at the time that he had “made himself at home in his new, cozy den.”

“Asim is a handsome, confident cat who is known for being very affectionate with the ladies in his life - we're hoping he'll be the perfect mate for our beautiful Melati,” she said, according to Sky News.

The organization Tigers in Crisis says there are only estimated to be about 500 to 600 Sumatran tigers in the wild.

The London Zoo said its tiger territory will remain closed while the team focuses on caring for Asim.