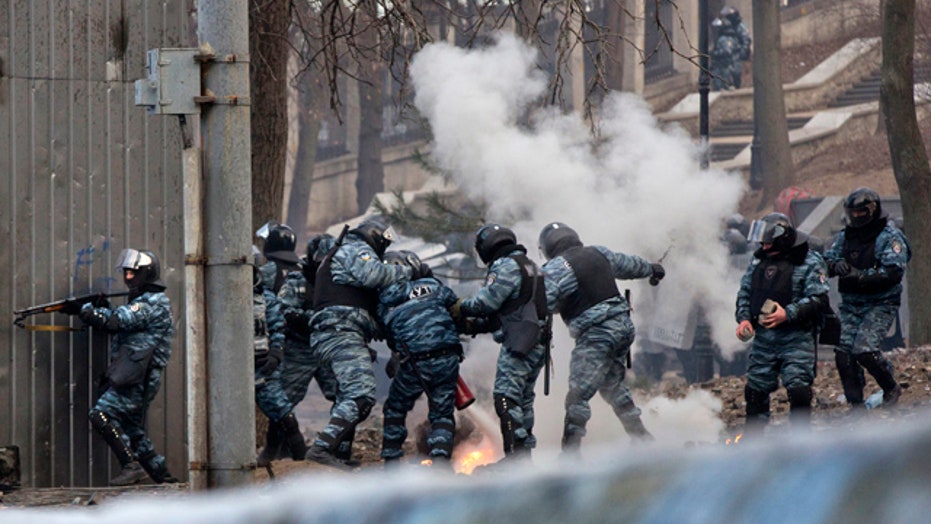 The violence has seriously escalated Ukraine's political crisis, which has been marked by two months of largely peaceful protests. Here's a look at the unclear roadmap for peace in Kiev:

HOW IT ALL BEGAN

The pro-Western protests in Kiev began Nov. 21 after President Viktor Yanukovych shelved a long-planned political and economic treaty with the European Union and then accepted a huge bailout package from Russian President Vladimir Putin instead. The protests swelled to hundreds of thousands -- the biggest since Ukraine's 2004 pro-democracy Orange Revolution -- after riot police violently broke up a small peaceful student protest. Clashes broke out on Dec. 1 between radical protesters and police, but demonstrations since then have been peaceful.

THE MOST RECENT TRIGGER

Sunday's violence came after Yanukovych pushed through a sweeping anti-protest law that significantly increased fines and imposed jail terms for unauthorized street protests. The new law also prohibits activists from wearing helmets or masks to demonstrations, curbs free speech and limits the ability to investigate or monitor the activity of officials, including judges. The law also restricts the activity of non-governmental organizations funded by the West, as many are in Ukraine.

The law mirrors anti-opposition legislation passed in Russia, prompting accusations that Yanukovych is following in Putin's footsteps in building a police state. The United States has called the legislation "undemocratic" and the European Union has urged Ukraine to revise it.

BUT NO UNITY IN THE OPPOSITION

The law has highlighted Yanukovych's disregard for the protests, which have been calling for his ouster, the restoration of civil rights and a pro-Western course for Ukraine. Yet demonstrators have been frustrated as well with the fragmented and often indecisive opposition.

During a large peaceful protest Sunday, the crowd chanted "Leader!" asking for the selection of one single protest leader who would take charge. When that did not happen, hundreds broke off from the main rally and marched toward parliament, where they began attacking riot police with sticks, firebombs and stones. Police responded with tear gas, water cannons and plastic bullets.

Opposition leader Vitali Klitschko, the world heavyweight boxing champion, tried to stop the violence, but was attacked by the radical protesters.

"We are tired of waiting, we must push the changes ourselves, we must change the leaders," said Petro Sopotensky, a 28-year-old protester.

CAN TALKS DO THE TRICK?

Intent on preventing what he called a possible civil war, Klitschko went to Yanukovych's home Sunday night and emerged with a promise of negotiations. But the president appointed the embattled national security council head Andriy Klyuyev, whom the opposition blames for the violent dispersal of the student rally, to lead the talks. On Monday, Klitschko insisted that the president must personally take part. He also called on all Ukrainians to rush to Kiev to defend the country's future.

"Get into cars, shuttle buses, buses," he said in a video address. "You are needed here so that Ukraine is the winner, not Yanukovych."

WHERE IS THE WEST IN ALL THIS?

Opposition leaders have been urging the EU and the United States to impose sanctions on top Ukrainian officials and Yanukovych's financial backers, but so far Western diplomats have only threatened sanctions and issued harsh statements. Hundreds of activists rallied outside the EU office in Kiev on Monday, chanting "We need your help!" in English and holding posters that read "No sanctions, no peace."

"The reaction of the international community has been inadequate," said Valeriy Chalyi, head of the Razumkov Center think tank. "We are talking about Ukraine's independence. And if one does not understand this today, tomorrow it will be too late."