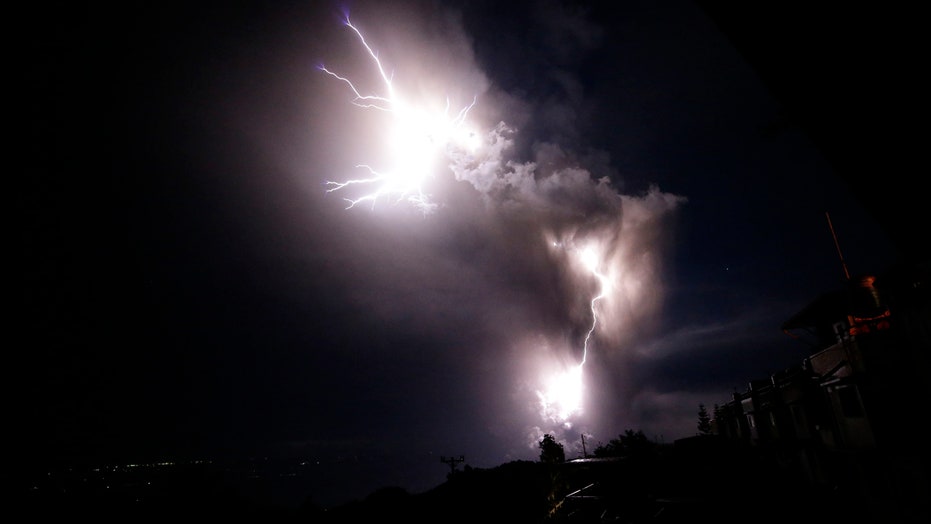 Authorities in the Philippines have warned that a "volcanic tsunami" may be possible after a small volcano near the country's capital erupted on Sunday, shutting down the main international airport and causing tens of thousands to evacuate.

The Philippine Institute of Volcanology and Seismology said in an advisory the Taal Volcano, located about 37 miles south of Manila, has been continuously blasting a column of steam, ash, and pebbles up to 9 miles into the sky. The volcanology institute raised the danger level around Taal three notches on Sunday to "Alert Level 4."

"This means that hazardous explosive eruption is possible within hours to days," the institute's advisory read.

Level 5, the highest, means a hazardous eruption is underway and could affect a larger area.

There were no immediate reports of injuries or damage, but authorities scrambled to evacuate more than 6,000 villagers from an island in the middle of a lake, where the volcano lies, and tens of thousands more from nearby coastal towns, officials said. About 300,000 people were targeted to be moved to safety in Batangas overnight and in the next few days.

The institute warned that those within an 8-mile radius of the volcano's crater along the lake are at "high risk" pyroclastic flows and "volcanic tsunami."

As volcanic tremors rattled the region, volcanic lightning could be seen flickering in the column of steam and ash generated by the eruption.

Areas north of the volcano are warned that "heavy and prolonged ashfall" may take place, while civil aviation authorities have advised aircraft to avoid the airspace around the volcano due to "airborne ash and ballistic fragments."

“We have asked people in high-risk areas, including the volcano island, to evacuate now ahead of a possible hazardous eruption,” Renato Solidum, who heads the volcanology institute, told reporters on Sunday.

Officials said the volcano tremors began around 11 a.m. local time and were followed by two volcanic earthquakes with magnitudes of 2.5 and 3.9, which were felt in Tagaytay City and Alitagtag.

All departing and arriving international and domestic flights at Manila’s international airport were suspended “due to volcanic ash in the vicinity of the airport” and nearby air routes, the Civil Aviation Authority of the Philippines said. Fallen ash could be seen covering the runways.

A tiny volcano near the Philippine capital that draws many tourists for its picturesque setting in a lake belched steam, ash and rocks in a huge plume Sunday, prompting thousands of residents to flee and officials to temporarily suspend flights. (AP Photo/Aaron Favila)

Heavy to light ashfall was also reported in towns and cities several miles from the volcano, and officials advised residents to stay indoors and don masks and goggles for safety. Motorists were hampered by poor visibility, which was worsened by rainy weather.

Classes in a wide swath of towns and cities were suspended Monday, including in Manila, to avoid health risks posed by the ashfall.

Those evacuating on Sunday said they fled the area quickly.

“We hurriedly evacuated when the air turned muddy because of the ashfall and it started to smell like gunpowder,” Renelyn Bautista from Batangas province’s Laurel town told the Associated Press.

The U.S. State Department warned Americans to "exercise caution" if traveling to the region near the volcano.

"Those planning travel to the Taal volcano region are encouraged to monitor current conditions, maintain active awareness of local conditions, and especially refrain from entering the Permanent Danger Zone and high-risk barangays," the State Department said.

The Philippines lies along the Pacific's so-called "Ring of Fire," a 25,000-mile horseshoe-shaped ring, accounting for approximately 90 percent of the world's earthquakes, according to the USGS.