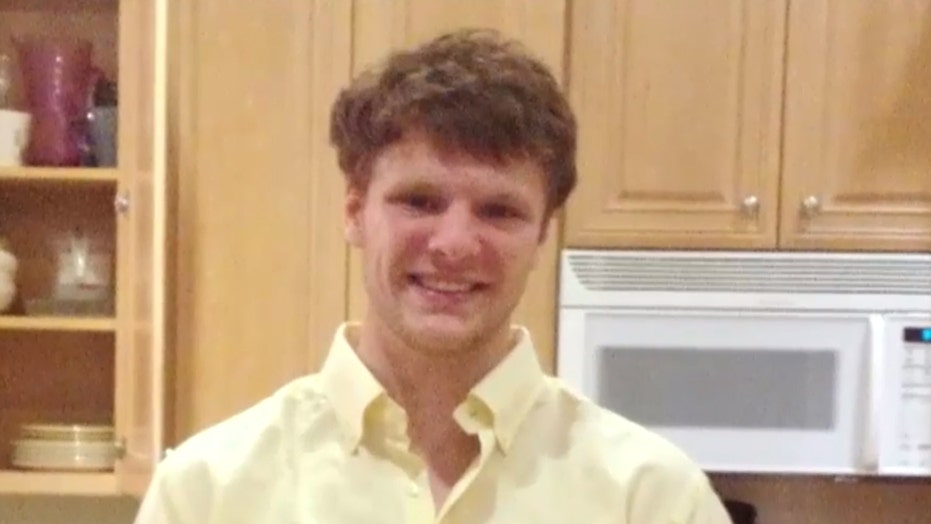 Eric Shawn: Kim Jong Un is 'a thug and a murderer'

A federal judge ruled that Otto Warmbier was falsely arrested, tortured, and sent home to die by the brutal regime of Kim Jong Un, because he was an American.

Now there is a push in his name to make the North Korean dictatorship pay for its continued defiance to denuclearize.

"This is an opportunity to stand up for Otto, to stand up for a world where bullies cannot have their way," said Sen. Chris Van Hollen, D-Md. "It is essential when you meet a bully like Kim Jong Un that you don't give him a big photo op. What you do is pass legislation to put maximum pressure on him."

"The Kim regime and Kim himself ultimately need to be held responsible for just the brutal, horrendous murder of Otto, and this is a way of reminding the world," said Sen. Pat Toomey, R-Penn. "By putting his name on this legislation, it's a way to keep his memory alive and remind the world of the atrocity of this regime."

Toomey, a Republican, and Van Hollen, a Democrat, have come together in a bi-partisan effort to honor Warmbier and send the North Korean regime a blunt message.

They are reintroducing the "Otto Warmbier BRINK Act," short for: "Banking Restrictions Involving North Korea." The legislation would clamp down on the global system financial system that keeps the regime afloat. The measure targets international banks, especially the large Chinese banks that provide billions for North Korea, and would force them to cut off the money supply that helps keep Kim Jong Un in power.

"The goal is to put the maximum economic pressure on the Kim regime of North Korea," Toomey told Fox News. "I think this is a very dangerous despot."

"If you are going to deal with North Korea you will not have access to the U.S. banking system," noted Van Hollen. "Most businesses, when they look at that choice, will say it’s just not worth doing business with North Korea."

The Senators say the measure is especially needed now because the two recent summits have not moved Kim to start the process of getting rid of his nuclear weapons. And, in fact, since President Trump walked out of his last meeting with the North Korean dictator, the regime has resorted to firing off short-range missiles and has not cooperated on either the return of the remains of U.S. soldiers from the Korean War, let alone cooperating when it comes to the nuclear program.

"We have to make the calculation for Kim Jong Un, deal with us on the goal of denuclearization or we will put mounting pressure on your economy," Van Hollen told Fox News.

"We've seen no progress, no real progress. In fact, maybe some backsliding now," Toomey said. "I think it is absolutely the time to ratchet up the pressure."

"Now would be an opportune time to pass this bill," Mrs. Warmbier told Fox News.

At a recent Hudson Institute symposium on North Korea in Washington D.C., she called on lawmakers to not relent.

"Unless we keep the pressure on North Korea, they are not going to change, and I am very afraid that we will let up on this pressure," she warned.

She called the Kim regime "a cancer on the earth," and believes the diplomatic attempts to deal with Kim are "a charade."

On Friday, at a United Nations symposium on North Korean Human Rights and its history of abducting Japanese citizens, her husband was equally stinging.

"We use this term 'Chairman Kim, and I swear it makes me sick. He's a criminal," Mr. Warmbier told the gathering. "He should be called 'Criminal Kim.' If we are afraid to tell the truth of who we're dealing with, we don't stand a chance at making a difference."

Mr. Warmbier said that the challenge is clear.

"If we aren't willing to stand up to North Korea, if we're going to coddle this guy and enable him, we're going to have these same conversations five and 10 years from now,” he said. “Every member of Kim's regime is he's a thug. He's a criminal and he's a murderer. It's that simple."

"The U.S really needs to increase its negotiating leverage by enforcing tough sanctions against North Korea and North Korea's partners," said Professor Song-Yoon Lee, the Kim Koo-Korea Foundation professor in Korean Studies at the Fletcher School of Law and Diplomacy at Tufts University. He said the U.S. should "exert enough national pressure so that Kim grows worried."

"For how long will Kim be able to pay off his military apparatus, security guards, his border patrol guards, the party elite, the cadre? Because if the leader is unable to appease, placate men with access to big guns, then you have a problem. So, in every sanctions policy, the intention is to create, to instill psychological doubt in the target, in the regime so that the regime comes to fear, credibly, fear the possibility of a challenge to the regime."

And behind the effort, is the legacy of Otto, a young man who represented American freedoms and values, and whose fate exposed the true face of the Kim regime.

What happened to him really reflects the nature of the North Korean regime and Kim Jong Un," Van Hollen said. "Kim Jong Un goes around the world to these summits with a lot of pomp and circumstance but he runs a brutal regime that killed an American, so we thought it was really important to remember Otto."

Toomey said what happened to Otto "is a disturbing reminder of how monstrous this regime can be."

"He falls into the clutches of an evil dictator,” he said, “and they beat him to death."