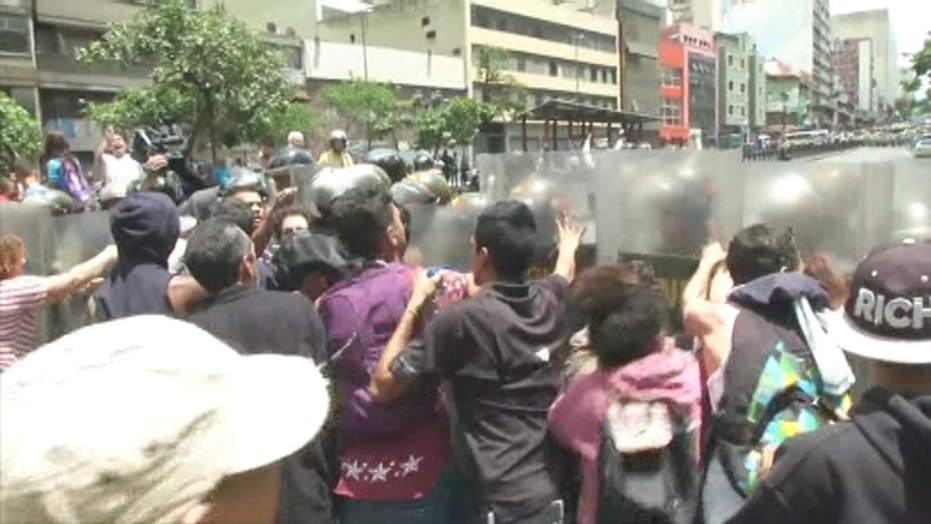 A throng of protesters made a run for the Venezuelan Presidential Palace in a rare outburst of anger at the socialist administration in Caracas.

CARACAS, Venezuela (AP) – A throng of protesters demanding food made a run for the Venezuelan presidential palace Thursday in a rare, apparently spontaneous outburst of anger at the socialist administration within the heart of Caracas.

More than 100 people charged down the main thoroughfare in central Caracas chanting "No more talk. We want food." They got within about a half dozen blocks of the palace before police in riot gear headed them off and began firing tear gas.

Police pushed the crowd back as some demonstrators kicked their plastic shields while more officers ran to the scene and filled in the streets between the protesters and the palace.

Onlookers leaned out of windows banging pots and yelling insults at the police.

Venezuela's political opposition has tried to keep a lid on violence and channel growing frustration with President Nicolás Maduro by staging several large demonstrations demanding a recall referendum to cut short his term. But the government appears determined to avert an electoral fight, even after the opposition's landslide win in December's congressional elections.

Protesters said the incident began at a nearby supermarket when it appeared people affiliated with the government were taking away the subsidized food those in line had been waiting for hours in the oppressive heat to buy.

"We have needs, too. We all need to eat" said José López, 23, who joined dozens of the protesters who ran toward the presidential palace.

Lopez and other protesters said they were neither members of the opposition nor supporters of the government, just people trying to feed themselves.

Unlike the organized protests, which draw largely from what's left of Venezuela's middle class and are never allowed by police to reach the president palace, the disturbance Thursday was driven mostly by people from the slums overlooking downtown and who form the core of the government's support. As such, it revived the specter of the so-called Caracazo, a four-day convulsion of looting in 1989 that left hundreds dead and is seared in Venezuela's national memory.

Shops closed their doors Thursday as police continued to fire tear gas, and some armed government supporters hit protesters with sticks. Both groups eventually moved off to a side street, leaving the usually chaotic thoroughfare empty in the early afternoon.

Hours after the main protest was contained, people continued to come down from their homes and face off with police, shouting, "We are hungry." Government supporters patrolled the streets on motorcycles and police periodically fired tear gas and rubber bullets to break up crowds that kept reforming until night fell.

Journalists from a half dozen outlets were attacked by government supporters, some of them armed, during the unrest. The public prosecutor's office said it would investigate.

Political leaders from both sides tried to use the incident to advance their cause.

"Every day the people are getting closer to the presidential palace demanding food. Soon they'll be at the door of the palace, Nicolás Maduro!" tweeted opposition leader Henrique Capriles, who has been leading the formal opposition marches.

Others in the opposition said the protest recalled the huge march that reached the presidential palace in 2002 and was followed by a coup that briefly ousted the late President Hugo Chávez, Maduro's mentor.

Caracas Mayor Jorge Rodríguez, a Maduro ally, told a local radio station that the protest was started by black market vendors who resell scarce items like sugar and toilet paper "at blood prices" near the site where the incident started. He said the government was working on food programs to put those vendors out of business.

Speaking from the presidential palace later in the day, Maduro pledged to stop those who he said are trying to destabilize the country, but did not make any direct references to Thursday's protest.

"They come at us every day looking for violence in the streets, and each day the people reject and expel them," he said. "We're winning peace on the corners, on the streets, on the avenues and in the slums."