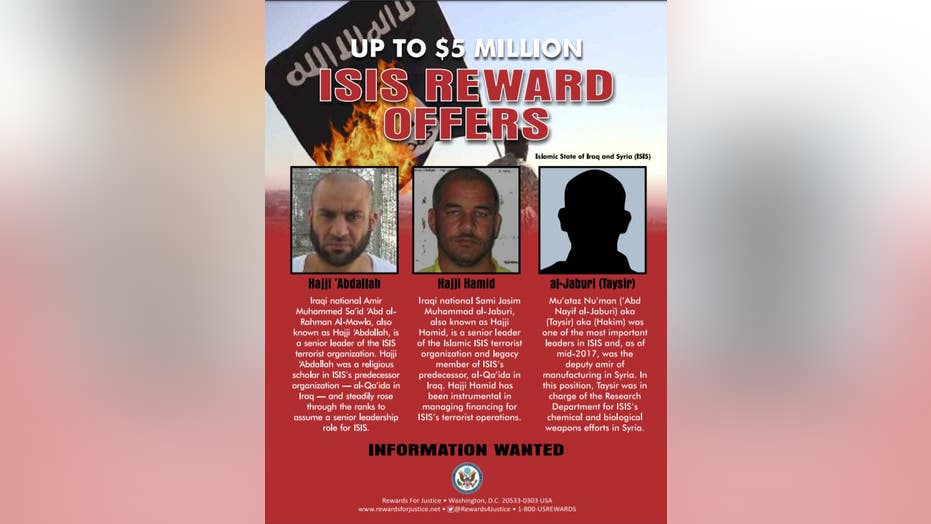 The new leader of the Islamic State (ISIS) group has been declared a “specially designated global terrorist," according to the State Department.

The agency said the designation for Muhammad Sa’id Abdal-Rahman al-Mawla prohibits Americans from engaging in any transactions with him. Al-Mawla took the reigns of the global terror group after Abu Bakr al-Baghdadi killed himself with an explosive vest last year during a raid by U.S. special operations forces on an ISIS compound in Syria.

"As a result of this designation, U.S. persons will be generally prohibited from engaging in any transactions with al-Mawla, and al-Mawla’s property and interests in property subject to U.S. jurisdiction will be blocked,” the State Department said in a news release Tuesday.

ISIS ADVISES TERRORISTS ON CORONAVIRUS TO AVOID EUROPE FOR JIHAD

Al-Mawla, an Iraqi national, was a member of ISIS’s predecessor organization, Al Qaeda, in Iraq, and helped drive the abduction, killing and trafficking of Yazidi religious minorities in northwest Iraq, the government said. He also oversees the terror group's global operations.

ISIS once occupied large swaths of territory in Iraq and Syria but has dissipated in recent years following a series of losses on the battlefield.

The State Department said it was making "significant progress" against the terror network and has "completely destroyed ISIS’s so-called" caliphate.

"We are taking the fight to its branches and networks around the world," the department said. “This whole-of-government effort is destroying ISIS in its safe havens, denying its ability to recruit foreign terrorist fighters, stifling its financial resources, countering the false propaganda it disseminates over the internet and social media, and helping to stabilize liberated areas in Iraq and Syria."