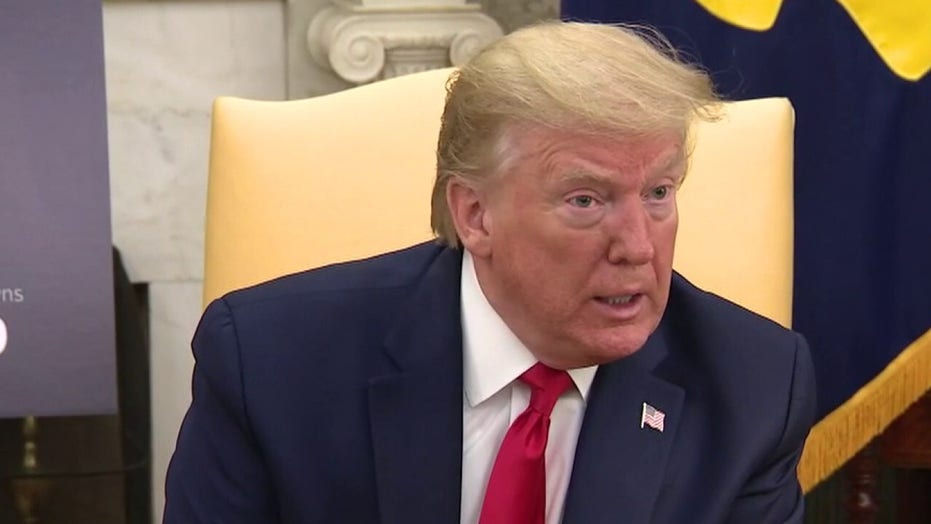 White House launches renewed effort to pin the blame for the pandemic on China and combat Chinese claims that the virus originated in the U.S.; chief White House correspondent John Roberts reports.

A research dossier compiled by the so-called "Five Eyes" intelligence alliance states that China intentionally hid or destroyed evidence of the coronavirus outbreak, leading to the loss of tens of thousands of lives around the world

The 15-page document from the intelligence agencies of the U.S., Canada, the U.K., Australia and New Zealand, was obtained by Australia's Saturday Telegraph newspaper and states that China's secrecy amounted to an “assault on international transparency."

The dossier touches on themes that have been discussed in media reports about the outbreak of the virus, including an initial denial by China that the virus could be transmitted between humans, the silencing or "disappearing" of doctors who tried to speak up, the destruction of evidence in laboratories and refusal to provide live samples to international scientists working on a vaccine.

Perhaps most damningly, the dossier states that Chinese authorities denied that the virus could be spread between humans until Jan. 20, "despite evidence of human-human transmission from early December."

The file is similarly unsparing about the World Health Organization (WHO), stating that it toed the Chinese line about human-to-human transmission despite the fact that "officials in Taiwan raised concerns as early as December 31, as did experts in Hong Kong on January 4.”

As of Friday night, the WHO's official Twitter account still featured a tweet from Jan. 14 that stated: "Preliminary investigations conducted by the Chinese authorities have found no clear evidence of human-to-human transmission of the novel #coronavirus (2019-nCoV) identified in #Wuhan, #China."

The dossier goes on to state that throughout February, "Beijing [pressed] the US [sic], Italy, India, Australia, Southeast Asian neighbours [sic] and others not to protect themselves via travel restrictions, even as [China] impose[d] severe restrictions at home."

The dossier continues with a litany of Chinese defensiveness, stating: “As EU [European Union] diplomats prepare a report on the pandemic, [China] successfully presses Brussels to strike language on [China] disinformation."

Similarly, “As Australia calls for an independent inquiry into the pandemic, [China] threatens to cut off trade with Australia. [China] has likewise responded furiously to US [sic] calls for transparency.”

The Saturday Telegraph report does present one apparent point of divergence between the allied governments, with Australia believing the coronavirus most likely originated in the Wuhan wet market and putting the chances it accidentally leaked from a lab at "5 percent."

By contrast, Fox News reported April 15 that U.S. intelligence officials are increasingly confident that coronavirus likely originated in a Wuhan lab as a consequence of China's attempt to demonstrate that its efforts to identify and combat viruses are equal to or greater than the capabilities of the United States

"Yes, I have," he replied, "And, I think that the World Health Organization should be ashamed of themselves because they’re like the public relations agency for China."

Multiple sources previously told Fox News that it is believed standards in Wuhan were disregarded before the virus leaked, prompting Beijing to initiate a cover-up. Sources also claimed the WHO was complicit from the beginning in helping China cover its tracks.

The WHO and China have denied any wrongdoing.

The Saturday Telegraph also reported that key figures at the Wuhan Institute of Virology previously worked or trained in Australian government labs where they conducted research on pathogens in live bats as part of an ongoing partnership with the Chinese Academy of Sciences.

According to the dossier, the team's work at the Wuhan lab involved discovering samples of coronavirus within a cave in Yunnan province and synthesizing a bat-derived coronavirus that could not be cured.