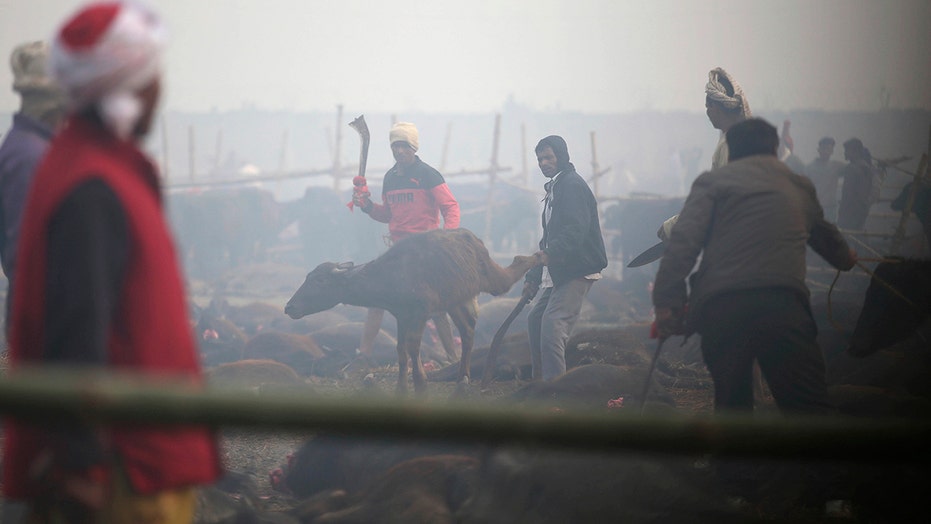 A religious festival in Nepal where thousands of animals are sacrificed to a Hindu goddess began on Tuesday despite calls to end the bloodshed.

The two-day Gadhimai festival kicked off at a Hindu temple in Bariyarpur, located about 80 miles south of Kathmandu, with the ceremonial slaughter of a goat, rat, chicken, pig and pigeon, according to news reports.

Held once every five years, hundreds of thousands of devout Hindus prepared to sacrifice thousands of buffalo corralled on temple grounds. The ceremonies are known as being the largest and bloodiest in the world.

Thousands of buffalo awaited being sacrificed on Monday. An estimated 200,000 animals were killed during the ceremonies in 2014, drawing the ire of animal activists. (AP Photo/Samir Shrestha)

The festival, named for the Hindu goddess of power, originated more than two centuries ago when an imprisoned priest had a dream that Gadhimai would set him free if blood was spilled. The most devout Hindus now sacrifice animals to make their most desired wishes come true.

"I had four sisters,” Priyanka Yadav, of Janakpur, told the BBC. “Eight years ago, I made a wish for a brother and the goddess blessed us with him.”

But the tradition sparked outcry from animal rights activists after an estimated 200,000 animals, including buffalo, pigs and goats, were killed during the last ceremonies in 2014, the outlet reported.

Temple authorities appeared to announce a ban on the animal sacrifices in 2015, but quickly claimed no such agreement was made just as animal activists announced “victory,” the BBC reported at the time.

A Hindu devotee holds leg of the buffalo as a butcher gets ready to sacrifice the animal. (AP Photo/Samir Shrestha)

Officials have since tried to curb the number of animals killed during the festival. Indian authorities have tried seizing animals at the border with Nepal, while Nepalese officials said they tried not to provide any backing for the ceremonies, Agence France-Presse reported.

"We had tried not to support it, but people have faith in the tradition and have come here with their offerings," Birendra Prasad Yadav, of the festival organizing committee, told the outlet.

Animal activists from Humane Society International attended the festival in the hopes of sparing as many animals as they could from what the organization called “a terrible fate.”

The group said that while it witnessed the sacrifice of 3,500 buffalos, that number was thousands less than in previous years.