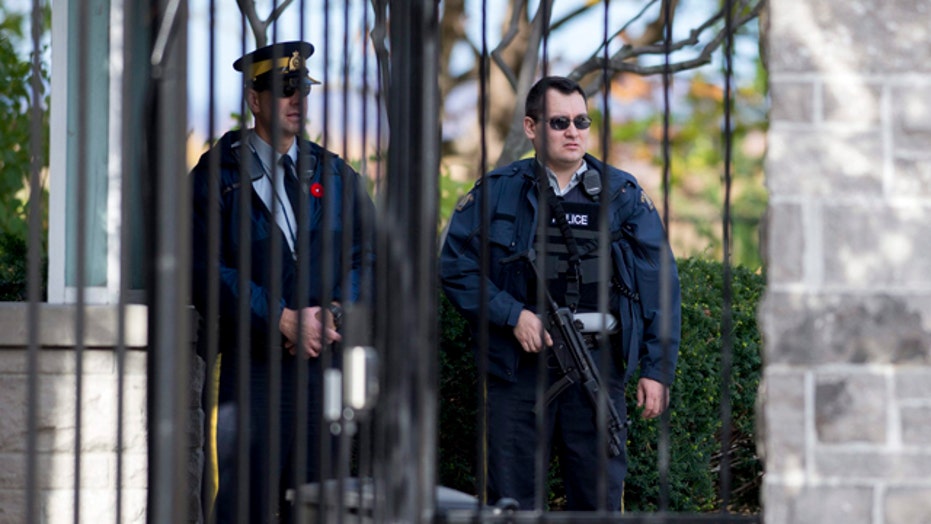 OTTAWA, Ontario – The mother of the man accused of killing a soldier at Ottawa's war memorial then storming Parliament before being shot dead says she is crying for the victims of the shooting, not her son.

In a brief and tear-filled telephone interview with The Associated Press Thursday, Susan Bibeau said she did not know what to say to those hurt in the attack.

"Can you ever explain something like this?" she said. "We are sorry."

Canadian police conceded Thursday that Zehaf-Bibeau was the lone gunman, the second attack in three days in what the prime minister described as terrorism.

Bibeau she was devastated for the victims of the attack.

"If I'm crying it's for the people," she said, struggling to hold back tears. "Not for my son."

Bideau and her husband had earlier sent the AP a lengthy email expressing horror and sadness at what happened.

"I am mad at my son," the email said, explaining that he seemed lost "and did not fit in."

"I his mother spoke with him last week over lunch, I had not seen him for over five years before that," the email said. "So I have very little insight to offer."

The heart of the capital city of Ottawa had been in lockdown after Wednesday's attack, with fears that other gunmen might be on the loose. Ottawa police Constable Marc Soucy confirmed to The Associated Press Thursday that police are satisfied there was one attacker. Ottawa police Chief Charles Bordeleau told the Canadian Broadcasting Corp. that "there is no longer a threat to public safety."

The two attacks stunned Canadians and raised concerns their country was being targeted for reprisals for joining the U.S.-led air campaign against the extremist Islamic State group in Iraq and Syria.

As Vickers walked into the House of Commons his lips quivered in emotion and he acknowledged the lengthy ovation.

Prime Minister Stephen Harper urged members of Parliament to seek medical help if they are suffering stress from Wednesday's attack in an uncharacteristic personal speech.

"Here we are in our seats, in our chamber in the very heart of our democracy, at work" Harper said. "We will not be intimidated."

Harper noted that both of the terror attacks in Canada this week came from citizens born in Canada.

Earlier Harper visited the National War Memorial where the soldier was killed to lay a wreath. A man was detained by police near where Harper put down the wreath. Police said the man tried to breach the crime scene and thought there would be minor charges if he's charged.

Earlier, Harper called the shooting the country's second terrorist attack in three days. A man Harper described as an "ISIL-inspired terrorist" on Monday ran over two soldiers in a parking lot in Quebec, killing one and injuring another before being shot to death by police. Like the suspect from Wednesday's shooting in Ottawa, he was a recent convert to Islam.

Witnesses said the soldier posted at the National War Memorial, identified as Cpl. Nathan Cirillo, was gunned down at point-blank range by a man carrying a rifle and dressed all in black, his face half-covered with a scarf. The gunman appeared to raise his arms in triumph, then entered Parliament, a few hundred yards away, where dozens of shots soon rang out, according to witnesses.

People fled the complex by scrambling down scaffolding erected for renovations, while others took cover inside as police with rifles and body armor took up positions outside and cordoned off the normally bustling streets around Parliament.

At least three people were treated for minor injuries.

In Washington, President Barack Obama condemned the shootings as "outrageous" and said: "We have to remain vigilant." The U.S. Embassy in Ottawa was locked down as a precaution, and security was tightened at the Tomb of the Unknown Soldier at Arlington National Cemetery just outside Washington.

Harper vowed that the attacks will "lead us to strengthen our resolve and redouble our efforts" to keep the country safe and work with Canada's allies to fight terrorists.

Court records that appear to be the gunman's show that he had a long rap sheet, with a string of convictions for assault, robbery, drug and weapons offenses, and other crimes.

The Canadian Broadcasting Corp. had video of the gunman going to his car alone with his weapon after the shooting at the memorial. The car was later spotted parked in front of Parliament Hill, just down the block.

Parliament remained under close surveillance by police and was closed to the public. Security was beefed up at government buildings across Canada. The federal government confirmed Tuesday it had raised its threat level due to an increase in "general chatter from radical Islamist organizations."