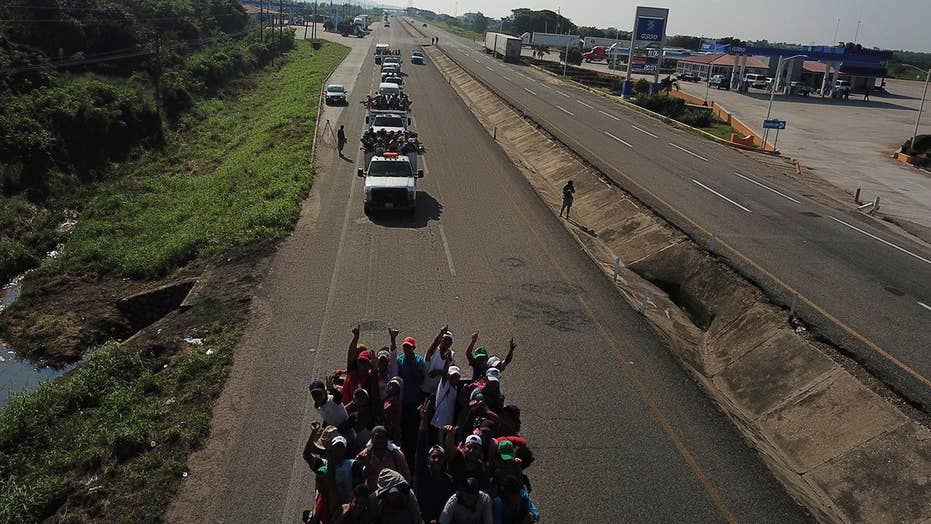 New questions about who is organizing the migrant caravan

As hundreds of migrants continue to make their way through Mexico toward the U.S. border, there are growing questions about whether the victims of this human tragedy are being used for political purposes; insight from former CIA operations officer Bryan Dean Wright.

A caravan of Central American migrants attempting to reach the U.S. border took a rest break on Sunday, stopping in Tapanatepec, Mexico.

The news came the same day that Defense Secretary Jim Mattis announced that the military has already begun delivering countermeasures to the southern border.

The Pentagon has sent jersey barriers in conjunction with plans to deploy active-duty troops there, and full details of the number of troops to be deployed as well as their roles should be announced Sunday night, he told reporters.

During an appearance on "Fox News Sunday," Homeland Security Secretary Kirstjen Nielsen vowed that the caravan "is not getting in." 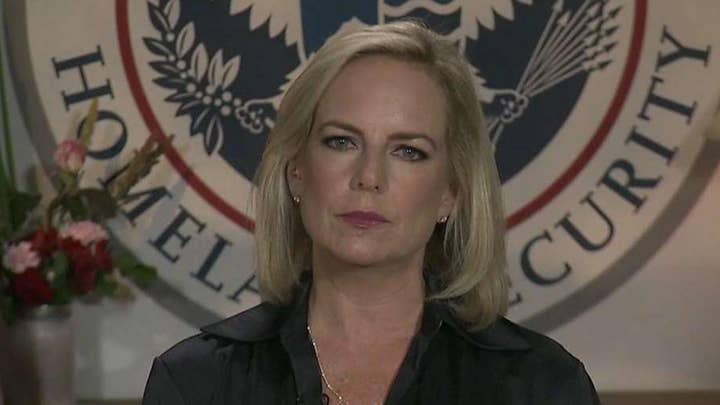 "There's a legal way to enter this country," she said. "Those who choose to enter illegally will be stopped. We are working with our partners in Mexico. They have taken unprecedented efforts within their territory to ensure an orderly flow and that those who have no legal right to be there are removed. We intend to do the same."

Nielsen soon addressed the convoy itself.

"My general message to this caravan is: Do not come," Nielsen said. "You will not be allowed in. ... There is a right way to immigrate to the United States," she continued, "and this is not it."

The caravan, which has included as many as 7,200 people and is currently approximately 1,000 miles from the closest border crossing with the U.S., has become a major issue with less than two weeks before the Nov. 6 midterm elections. The group has traversed about 30 miles per day since forming in Honduras, with many members saying they are fleeing the violence and widespread poverty there.

The tensions of a long trek through searing heat with tenuous supplies of food and other goods spilled over Saturday night when a dispute over a food line evolved into the beating of a man falsely accused of child stealing.

Raul Medina Melendez, security chief for the tiny municipality of Tapanatepec in Oaxaca state, said the town was distributing sandwiches and water to migrants camped in the central square Saturday night. When a man with a megaphone asked people to wait their turn, some men hurled insults at him. "Finally people got really angry and those below began to attack the guy," Medina said.

As the man ran, a false rumor spread that he had grabbed a child for protection and he was caught and beaten. Police rescued him and took him to a hospital for treatment, though his condition wasn't immediately clear.

On Sunday, several in the caravan took to microphones to denounce the attack. "Is that the way we're going to always behave?" a woman from Honduras asked. "Anytime there's a rumor everyone is going to run to beat up someone?"

Also on Saturday, an arm of the Mexican federal government for the first time seemed to be directly helping the migrants advance: Grupo Beta, Mexico’s migrant protection agency, gave rides to stragglers and passed out water.

Other agencies have periodically tried to impede or erode the mass migration, whose progress has led President Trump to threaten action against Mexico. Earlier Saturday, more than 100 federal police dressed in riot gear blocked a highway before dawn to encourage the migrants to apply for refugee status in Mexico rather than continuing the journey north.

Police let the caravan proceed after representatives from Mexico's National Human Rights Commission convinced them that a rural stretch of highway without shade, toilets or water was no place for migrants to entertain an offer of asylum.

The Mexican government says more than 1,700 people in the caravan have applied for asylum and that other people have gone home, Reuters reported Saturday. Honduras, according to the report, says that 4,500 Honduran citizens trying to leave have recently come back to the Central American country.

On Thursday, Trump directly addressed the caravan members on Twitter.

“To those in the Caravan, turnaround, we are not letting people into the United States illegally,” he wrote.

He added, “Go back to your Country and if you want, apply for citizenship like millions of others are doing!”