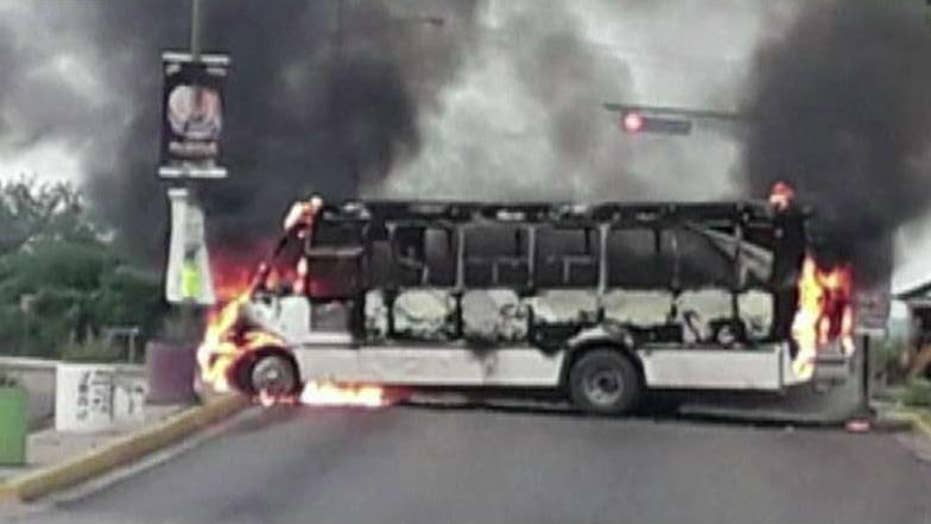 Mexican President Andres Manuel Lopez Obrador defended the decision by security forces to retreat – and subsequently release one of the sons of the infamous drug lord Joaquin “El Chapo” Guzman – after his detainment sparked intense fighting in northern Mexico.

At least 8 people were killed and more than 20 wounded when militarized police and National Guard members patrolling the northern city of Culiacan – the capital of Mexico’s Sinaloa state – were engaged by heavily armed gunmen on Thursday night.

Officials said the patrol had been fired upon from a house in Culiacan and when they repelled the attack, they found Guzman’s son, Ovidio Guzman Lopez – who is wanted by U.S. authorities on drug trafficking charges – inside with three other men.

Guzman was briefly detained, but his heavily armed supporters surrounded the house, sparking an hours-long gun battle between police and cartel members.

Culiacan exploded in violence, with civilians in trucks roaring through the city’s center, shooting what appeared to be .50-caliber sniper rifles and machine guns.

Videos published on social media showed a scene resembling a war zone, with gunmen, some wearing black ski masks over their faces, firing mounted machine guns as vehicles burned around them.

In one video, a child is seen asking his father asking: “Dad, can we get up now?”

“No, stay there on the floor,” the man replied.

The government said security forces were quickly outmatched and were forced to withdraw – without Guzman – to prevent further bloodshed.

Lopez Obrador said Friday that he supported the decision to pull back.

“The capture of one criminal cannot be worth more than the lives of people,” he said, calling the response to the operation “very violent” and that many lives were put at risk.

“This decision was made to protect citizens. … You cannot fight fire with fire,” he added. “We do not want deaths. We do not want war.”

Smoke from burning cars rises due in Culiacan, Mexico, Thursday, Oct. 17, 2019. An intense gunfight with heavy weapons and burning vehicles blocking roads raged in the capital of Mexico’s Sinaloa state Thursday after security forces located one of Joaquín “El Chapo” Guzmán’s sons who is wanted in the U.S. on drug trafficking charges. (AP)

Five attackers, a member of the National Guard, a civilian and a prisoner were killed, Mexican Defense Secretary Luis Cresencio Sandoval said.

Ovidio Guzman is not one of the jailed Mexican kingpin’s best-known sons – Ivan Archivaldo Guzman and Jesus Alfredo Guzman are known as “Los Chapitos” or “the little Chapos” and are believed to currently run their father’s Sinaola Cartel together with Ismael “El Mayo” Zambada.

However, Ovidio Guzman was indicted in 2018 by a grand jury in Washington, along with a fourth brother, for alleged trafficking of cocaine, methamphetamine, and marijuana.

Jose Luis Gonzalez Meza, a lawyer for El Chapo’s family, told The Associated Press that Guzman’s family reported “Ovidio is alive and free” but that he had no more details.

A car's rearview window is pierced with bullet holes amid a gunfight in Culiacan, Mexico, Thursday, Oct. 17, 2019. (AP Photo/Hector Parra)

Cristobal Castañeda, head of security in Sinaloa, said gunmen blocked streets with burning vehicles, a common tactic to make it difficult for security forces to maneuver.

Falko Ernst, a senior analyst for the International Crisis Group in Mexico, told Reuters that Ovidio Guzman's release creates a “dangerous precedent" and shows the military is not in control.

Sinaloa is home to the cartel by the same name, which was led by "El Chapo" Guzmán. The drug kingpin was sentenced to life in prison in the United States in July.

After Guzmán's third arrest in 2016, an internal battle for succession began playing out. The battle was resolved with the arrest of Damaso López Nunez and his son Dámaso López Serrano, who led a rival faction.

Fox News' Brie Stimson and the Associated Press contributed to this report.