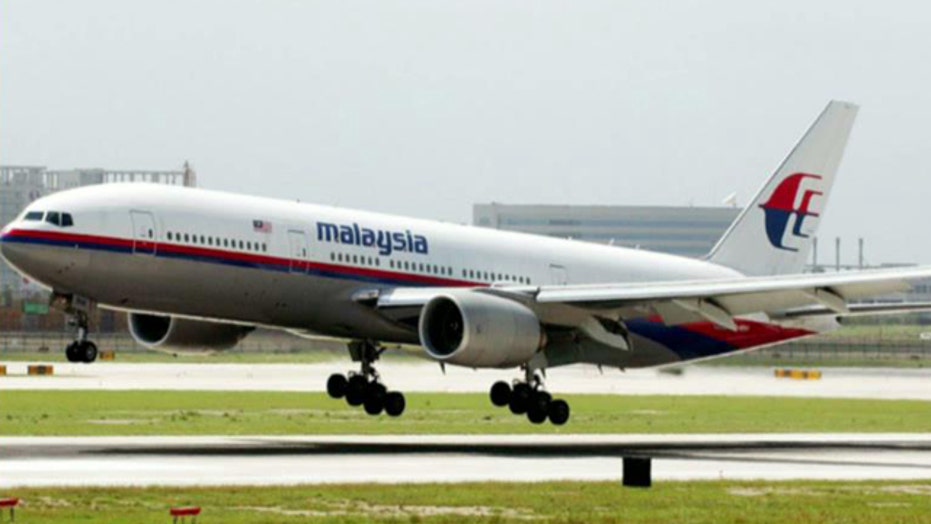 Malaysian authorities Thursday expanded their hunt for a vanished airliner westward to the Indian Ocean, where a U.S. destroyer was expected to arrive soon to assist in search efforts.

Further compounding the mystery of what happened to Malaysia Airlines Flight 370, ABC News late Thursday quoted two unidentified American officials as saying the U.S. believes the plane's data reporting system and transponder were shut down separately, at 1:07 a.m. and 1:21 a.m. Such a scenario would indicate the plane did not disappear due to some kind of catastrophic failure.

The latest search site emerged after U.S. aviation investigators and national security officials said earlier Thursday that the plane with 239 aboard remained in the air for hours after it lost contact with air traffic controllers and disappeared from radar screens last Saturday.It had been enroute from Kuala Lumpur to Beijing.

A source familiar with the investigation but not authorized to speak on the record told Fox News that flight 370 continued to send "periodic pushes" of data after the transponder went dark, suggesting the jet continued to fly. This was described to Fox News as signals data that, in isolation, would not provide location data.

The Wall Street Journal reported that investigators think the plane flew on for between four and five hours, based on data automatically downloaded and sent from the plane's engine to its manufacturer as part of a routine maintenance agreement. If true, the plane could have flown hundreds of miles away from where it was last seen over the Gulf of Thailand, where the multinational search effort has been concentrated.

But asked if it were possible that the plane kept flying for several hours, acting Malaysian Transport Minister Hishammuddin Hussein said, "Of course, we can't rule anything out. This is why we have extended the search. We are expanding our search into the Andaman Sea."

Meanwhile, U.S. Navy officials Thursday afternoon confirmed to Fox News that the U.S.S. Kidd is en route to the Indian Ocean via the Strait of Malacca to search for the jetliner. It was not immediately clear when the vessel was due to arrive in the area but it was expected in coming days.

U.S. counter-terrorism officials are exploring the possibility that a pilot or someone else on board the plane may have diverted it toward an undisclosed location after turning off the plane's transponders to avoid radar detection, a person tracking the investigation told The Journal.

The paper reported that investigators have not definitely decided whether they believe terrorism was at the root of the plane's disappearance, but are pursuing theories that would rule out mechanical problems or pilot error. Once such theory, according to the Journal, holds that the plane may have been diverted "with the intention of using it later for a different purpose."

Vernon Grose, a seasoned National Transportation Safety Board investigator and consultant, told Fox News his preliminary assessment was that if the plane disintegrated, he would expect to find large pieces of wreckage, including the wings, the horizontal stabilizer in the tail and the vertical fin.

When the wreckage is located, Grose said the black boxes should be located in fairly short order.

The new theory was reported shortly after Malaysia's civil aviation chief said that no signs of the missing jetliner have been found at a location where Chinese satellite images showed what was thought to be plane debris.

Datuk Azharuddin Abdul Rahman said planes searched the location Thursday. "There is nothing. We went there, there is nothing," he told reporters in Kuala Lumpur.

The satellite images from the morning of March 9 appear to show "three suspected floating objects" of varying sizes in the sea off the southern tip of Vietnam and east of Malaysia – a part of the original search area for the aircraft, which was en route from Kuala Lumpur to Beijing.

Two-thirds of the passengers on the flight were Chinese, and the Chinese government has put increasing pressure on Malaysian officials to solve the mystery of the plane's disappearance.

The message was reportedly sent from the cockpit to the controllers in response to being informed that the plane was entering Vietnamese airspace.

Authorities have not ruled out any possible cause for the plane’s disappearance, including mechanical failure, pilot error, sabotage or terrorism in the disappearance of the plane. The 777 is a modern aircraft with an excellent safety record, as does Malaysia Airlines.

In June 2013, Boeing issued a safety alert to Boeing 777 operators, telling them to inspect for corrosion and cracks in the crown fuselage around a satellite antenna. The alert says one airline found a 16-inch crack in one plane, then checked other 777s and found more cracking.