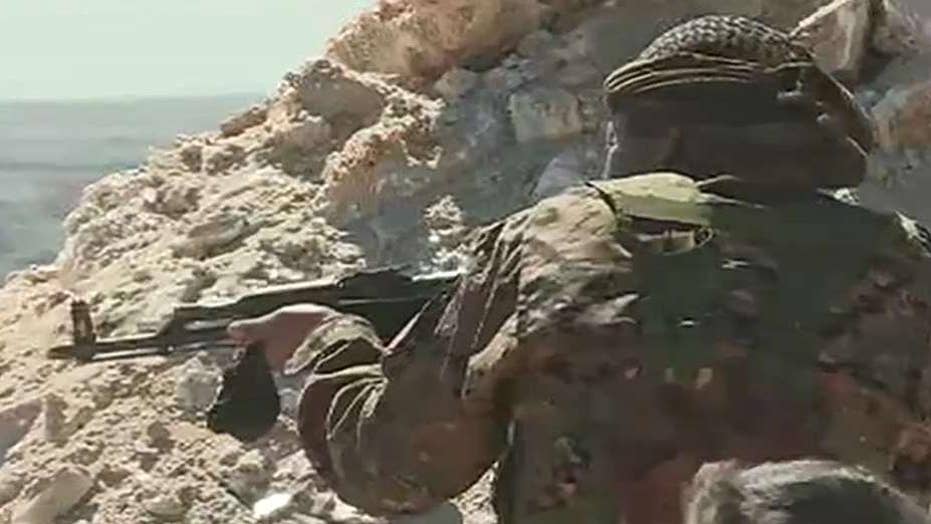 BAGHOUZ, Syria -- ISIS fighters are standing just 150 feet away and we are crouched on a rooftop in a building that hardly stands, obliterated by the offensive underway. The roof has caved in, just like every other building within miles. Mortar, artillery and machine gun fire have targeted them.

This is the final push against the terror group -- and it’s a devastating scene.

We can see a few terrorists scavenging, milling around closely. We can hear them. Sometimes they shout toward us – they’re driving motorbikes, digging for roots, and carrying AK47s and RPGs. Most of the fighters, however, are out of sight. 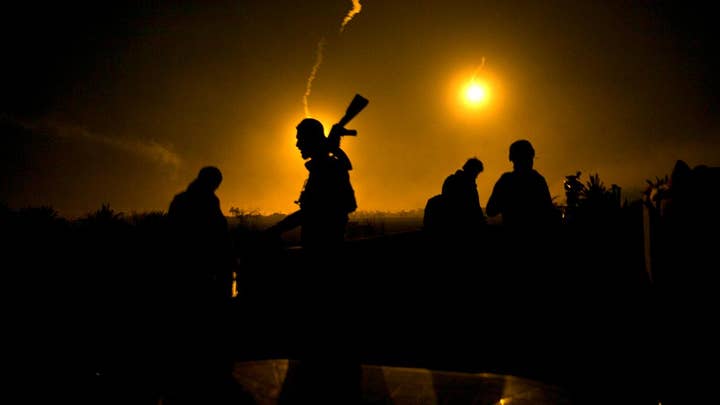 Baghouz is the last ISIS-held village left, the last remnants of what was once a territory the size of Indiana, with 8 million people under ISIS' rule. Now, they are down to a sliver of land no more than half a square mile. We’re at the closest point.

What is amazing is even though there are only a few left, they don’t seem scared. The remaining ones are true believers, ready to die, and are promised heaven in return. They once ruled millions of people, now they are living in hovels.

President Trump told the military to take off the gloves against this brutal ideology. It’s thanks to that we’re at this point. Soldiers here tell us constantly to thank the president. On Tuesday, defense officials said that ISIS terrorists tied to a January suicide bombing in Syria that killed four Americans were captured by U.S.-backed forces.

Around us, gun battles have raged for hours. Our ears are ringing as powerful U.S. airstrikes shake the ground. The women, at least, know they’re safe, knowing the U.S.-backed Syrian Democratic Forces won’t shoot them.

Sometimes, the fighters shout for food. If the bullets don’t kill them, starvation will. The irony is their fighters often appear healthy, well-fed and well-stocked. They have prepared for this final battle for years. They give what’s needed to the men while ignoring the plight of the women.

We move from building to building so snipers can’t see us. Sometimes, bullets fly past us.

All that remains is a tented camp at the edge of the town bordering the Euphrates River, once the ISIS heartland where support was strong. On the other side of the river, just a mile away, Assad forces are in place waiting, a reminder of the complexities of the conflict.

AS ISIS CRUMBLES, SYRIAN KURDS WORRY ABOUT US TROOP WITHDRAWAL

We’re told most ISIS fighters, wives and children are underground underneath the tents. They stay hidden, living a subterranean life in caves and tunnels. Because of that, there is no way to know how many remain. It is believed some of the tunnels are miles long -- and they may still have supply lines. But this belief is highly disputed.

Nobody knows how many ISIS fighters are left. Six weeks ago, authorities estimated 1,500 ISIS fighters remained. Since then, 30,000 have come out, surrendering to U.S.-backed Kurdish forces. The fear is there are many more.  (Fox News )

Nobody knows how many ISIS fighters are left. We were here six weeks ago and back then, we were told an estimated 1,500 ISIS fighters remained. Since then, 30,000 have come out, surrendering to U.S.-backed Kurdish forces. The fear is there are many more.

Members of U.S. Special Forces monitor them in the desert as they surrender.

The number of people left has surprised everyone. It now seems as if every survivor from past battles, every ISIS family member, moved down here months ago and has been living underground since. U.S. drones and satellites overhead were not even aware they were there.

The remaining ISIS fighters in the last remaining enclave are true believers, ready to die, and are promised heaven in return. They once ruled over millions of people, now they are living in hovels. (Fox News )

The local forces now admit they still have no idea how many remain. They have stopped trying to guess.

Some reports suggest ISIS fighters are now being ordered to surrender, at least the ones who are injured. They know they’ll be treated well and put into camps and can live to fight another day. Camps are bursting with tens of thousands of people.

It’s what to do with them that nobody can figure out.