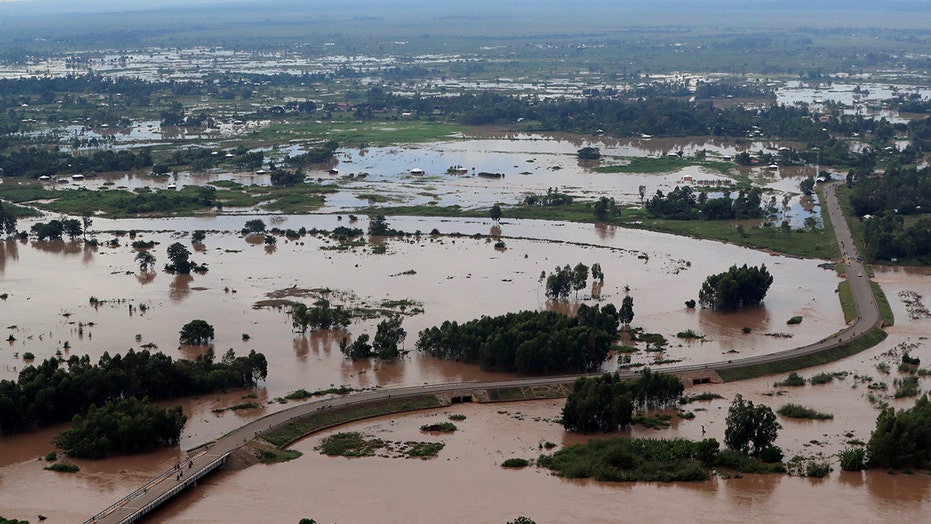 Nearly 200 are dead and more than 100,000 displaced from their homes after heavy rains and thunderstorms led to severe flooding and landslides across Kenya in recent weeks.

Government minister Eugene Wamalwa said Wednesday that the 194 deaths so far have been concentrated in the western part of the country.

“Yesterday alone, we have lost 30 people in a matter of 24 hours,” he told reporters.

Kenya is in its first rainy season of the year. Its second rainy season late last year saw unusually high rainfall after droughts in previous years. More than 120 people died during that period from flooding and mudslides.

An aerial view shows flood waters near the Sigiri bridge, after River Nzoia burst its banks and due to heavy rainfall and the backflow from Lake Victoria, in Budalangi within Busia County, Kenya May 3. (REUTERS/Thomas Mukoya/File Photo)

In the western part of the country, residents have fled homes now flooded by the River Nzoia.

Government spokesman Cyrus Oguna said on Twitter that over the past three weeks, floods displaced 100,000 people.

Residents wade through the waters after their home was flooded after the River Nzoia burst its banks and due to heavy rainfall and the backflow from Lake Victoria, in Budalangi within Busia County, Kenya May 3, 2020. (REUTERS/Thomas Mukoya/File Photo)

Energy Minister Charles Keter said Wednesday that people living near those downstream reservoirs must evacuate because things are "worsening," according to Reuters.

“We are asking them to move," Keter said Wednesday. "Let them not wait for water, because this is historical.”

Residents use a boat to carry their belongings through the waters after their homes were flooded as the River Nzoia burst its banks and due to heavy rainfall and the backflow from Lake Victoria, in Budalangi within Busia County, Kenya May 3, 2020. (REUTERS/Thomas Mukoya/File Photo)

Aid groups worry that the new flooding complicates efforts to cope with both the coronavirus pandemic and the worst locust outbreak Kenya has seen in 70 years.

Save the Children has said the three natural disasters will devastate chances of survival for malnourished children in Kenya and neighboring Somalia and Ethiopia, especially as crops are destroyed.

Government officials are providing food and water to the evacuated from the flooding, in addition to requesting the country's Health Ministry to provide them with masks as a precautionary measure to prevent the spread of COVID-19. As of Wednesday, 24 people in Kenya have died of coronavirus.