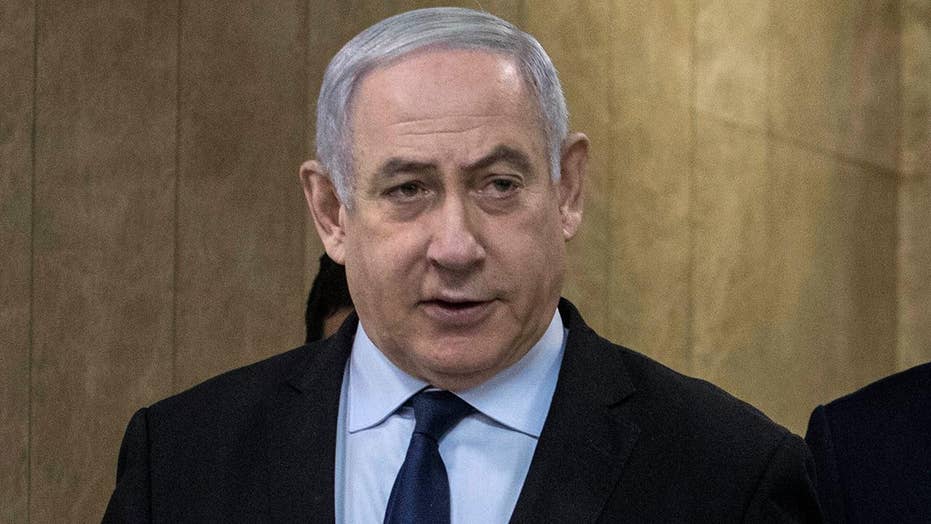 On Thursday, Israeli Prime Minister Benjamin Netanyahu claimed an overwhelming victory in a primary election for leadership of the ruling Likud party ahead of the general election next year.

People look at a poster of Israel Prime Minister and governing Likud party leader Benjamin Netanyahu at a voting center in the northern Israeli city of Hadera, Thursday, Dec. 26, 2019.  (AP)

The win gives the embattled leader a boost ahead of Israel’s third election in less than a year and could give him another opportunity to form a government after falling short in two previous attempts in 2019.

The apparent victory also keeps alive Netanyahu's hopes of winning immunity from prosecution after being indicted last month on a series of corruption charges.

"A giant victory," Netanyahu tweeted just over an hour after polls closed.

"Thanks to the members of Likud for the trust, support and love," he added. "God willing, I will lead Likud to a big victory in the coming elections."

But despite Likud's strong position, the general election is widely expected to leave the party and its main rival, the Blue and White, unable to form a government on their own, and Netanyahu's lingering legal troubles could again hamper efforts to form a unity government.

Netanyahu, who has led the country for the past decade, has cultivated an image as a veteran statesman with close ties to President Trump, Russian President Vladimir Putin and other world leaders.

His refusal over the last decade to make any concessions to the Palestinians was rewarded after Trump took office. His hardline approach to Iran has also proved popular.

A Likud party member sits by a poster of veteran politician Gideon Saar from the governing Likud Party at a voting center in the northern Israeli city of Hadera, Thursday, Dec. 26, 2019.  (AP)

But his fortunes have waned after he was unable to form a government following back-to-back elections in March and September. His party came in second place in September's elections, causing many observers to view the vote as the beginning of the end.

In November, Netanyahu was indicted on charges of fraud, breach of trust and accepting bribes. Netanyahu has vowed to remain in office, dismissing the indictment as an "attempted coup" by hostile media and law enforcement.

Opinion polls have forecast a similar outcome in the March vote, with Likud and Blue and White leading the pack, and Avigdor Lieberman's Yisrael Beiteinu party emerging as the kingmaker.

Netanyahu is desperate to remain in office, where he is best-positioned to fight the corruption charges. Israeli law does not require a sitting prime minister to resign if indicted.

The Supreme Court will next week begin considering whether an indicted member of parliament can be tasked with forming a new government, a decision that could potentially disqualify Netanyahu from leading the next government.