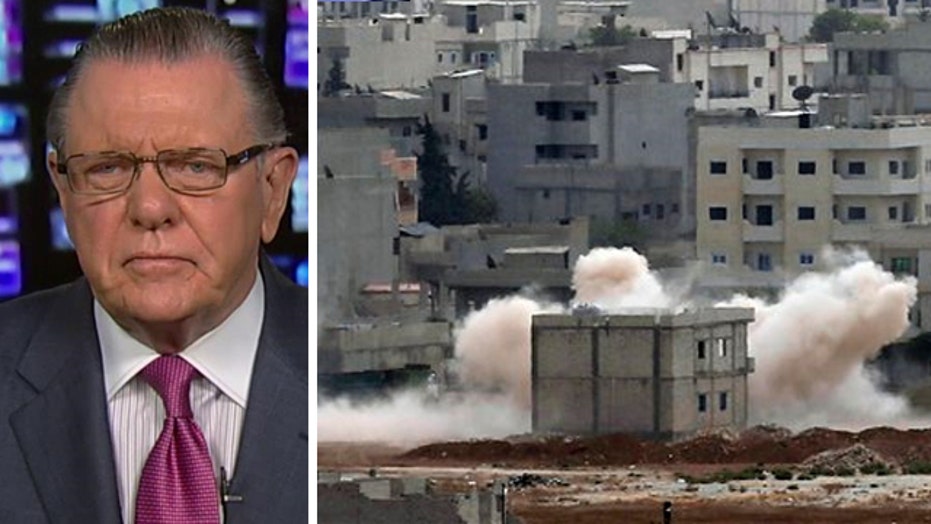 Gen. Keane: Battle for Kobani shows flaws of US strategy

SURUC, Turkey – A suicide bomber from the Islamic State extremist group detonated his explosives-laden vehicle in Kobani on Monday, as fierce fighting with Kurdish militiamen resumed in the northern Syrian town near the Turkish border.

The sound of explosions and occasional gunfire could be heard across the border from Kobani a day after Kurdish fighters managed to slow the advance of the jihadist group. What appeared to be a rocket-propelled grenade struck a minaret in the center of the town, emitting a cloud of white smoke.

Activists said Islamic State militants were carrying out a three-pronged attack from the eastern side of the town and that clashes were ongoing in the southern part.

The Syrian Kurdish enclave has been the scene of heavy fighting since late last month, with the better-armed Islamic State fighters determined to capture the border post.

The extremist group has carved out a vast stretch of territory from northern Syria to the outskirts of Baghdad and imposed a harsh version of Islamic rule. The fighters have massacred hundreds of captured Iraqi and Syrian soldiers, terrorized religious minorities, and beheaded two American journalists and two British aid workers.

A U.S.-led coalition has been carrying out airstrikes against militant targets in and around Kobani for more than two weeks, and the town's fate has emerged as a major test of whether the air campaign can roll back the extremists in Syria.

The Britain-based Syrian Observatory for Human Rights said an Islamic State suicide bomber detonated a car filled with explosives in the northern part of Kobani near the border with Turkey on Monday.

It said the car was headed to the border crossing between Kobani and Turkey. A Kurdish activist in the town, Farhad Shami, said the vehicle appeared to have exploded prematurely. It was not immediately clear whether there were any casualties.

Shami said coalition aircraft were flying over Kobani and had struck 10 times Sunday and Monday.