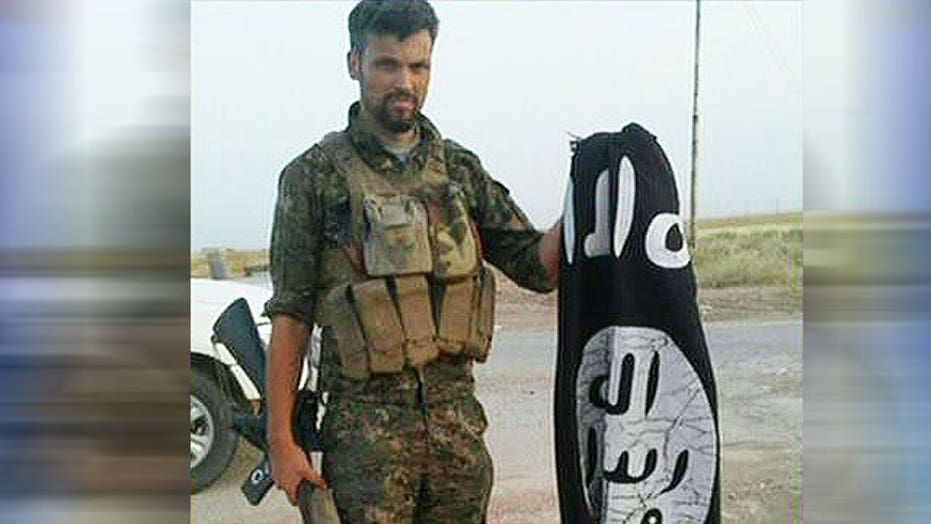 Veteran fighting against ISIS in Syria speaks out

Rami Abdurrahman of the Britain-based Syrian Observatory for Human Rights told the Associated Press the extremists overran the archaeological site, just to the southwest of the modern settlement on Palmyra, shortly after midnight local time.

In Damascus, state TV acknowledged that pro-government forces had withdrawn from the town. A Facebook page close to ISIS published a statement Thursday, purportedly from the group, saying "the soldiers of the Islamic State" completed their control of Palmyra. The capture came after government forces collapsed, "leaving large numbers of dead whose bodies filled the streets," it said.

An activist in the central province of Homs who goes by the name of Bebars al-Talawy said ISIS has taken over the ruins at the UNESCO world heritage site famous for its 2,000-year-old towering Roman-era colonnades and other ruins and priceless artifacts. Before the war, thousands of tourists a year visited the remote desert outpost, a cherished landmark referred to by Syrians as the "Bride of the Desert."

Both activists said Thursday that ISIS had not damaged the ruins so far. ISIS has previously destroyed major archaeological sites in Iraq that predate the founding of Islam. Sky News reported that hundreds of statues and artifacts had been taken to safety ahead of the ISIS advancement, but larger items, such as stone tombs, could not be removed in time.

In Damascus, Maamoun Abdul-Karim, the head of the Antiquities and Museum Department, said Palmyra's town museum had suffered "minor damages" during the ISIS onslaught.

"The city is now totally controlled by gunmen and its destiny is dark and dim," warned Abdul-Karim. "We are in a state of anticipation and fear" about what will happen to "the archaeological site and the remaining artifacts in the museum."

The Syrian Observatory for Human Rights said that ISIS also had seized control of Palmyra's military air base, prison and intelligence headquarters. The Associated Press reported that the prison, known as Tadmur, is where thousands of Syrian dissidents have been imprisoned and tortured over the years.

An amateur video posted online showed ISIS fighters, allegedly inside the prison, burning a giant poster of Syrian President Bashar Assad and cheering as flames rose around them against the night sky. The video and its location could not be independently verified, but appeared genuine and corresponded to other AP reporting of the events.

Al-Talawy said Syria’s government had recently transferred thousands of detainees from the Palmyra prison to a jail near Damascus.

But he added that ISIS extremists have freed some of those who were still inside the prison. He could not provide any definitive figures but there were believed to have been thousands of prisoners still there.

The fall of Palmyra marks the first time that ISIS has seized a population center directly from Syria's military. The group already controlled vast, largely uninhabited tracts of land in Syria's north and east. The country's major population centers, such as Damascus, Homs, and Aleppo, are located in the west, near the border with Lebanon and the Mediterranean coast.

Syrian state media had earlier reported that government troops had withdrawn from the site after ensuring the safe removal of its inhabitants. Many Palmyra residents were fleeing the town toward the city of Homs and the capital, Damascus, according to Talal Barazi, the provincial governor.

Barazi told The Associated Press that the Syrian army is now amassing outside Palmyra, from where it is targeting ISIS reinforcements.

"We have not received any news about (the archaeological site's) destruction," Barazi said. "We hope that there will be no massacres in the city or damage to the ruins."

Palmyra has a population of some 65,000 people, according to Barazi. He added that 1,300 residents fled over the past days and more were trying to leave on Thursday.

The Observatory said Thursday that according to its estimates, 462 people have been killed since ISIS began its offensive on Palmyra and nearby areas on May 13. It said the dead included 241 troops and pro-government gunmen, as well as 150 ISIS fighters. The rest were civilians, presumably killed by ISIS or in the crossfire.

Despite the stunning victory by ISIS in Palmyra, the extremists suffered a setback in Syria's northeastern province of Hassakeh, where they have come under attack by Kurdish fighters.

The Kurdish fighters captured much of the Abdul-Aziz Mountain near the village of Tel Tamr on Wednesday, according to the Observatory and the Kurdish forces known as the People's Protection Units, or YPG.

The Observatory said YPG fighters were backed by airstrikes of the U.S.-led coalition, which has been bombing ISIS positions in Syria since September.