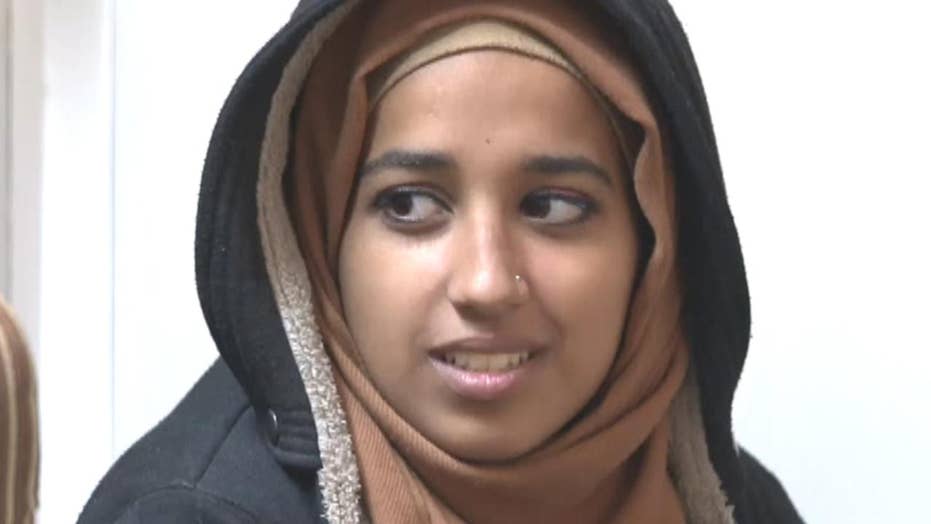 ISIS bride speaks to Fox News about her radicalization, desire to return to US

NORTHERN SYRIA -- In the dying days of the caliphate, thousands of ISIS families fled into the Syrian desert trying to escape the incessant bombardment of U.S. airpower.

Among them, Hoda Muthana, the woman born in America who joined ISIS. She is now living in a squalid camp in Northern Syria – and Fox News tracked her down.

“I just want to go back home,” she said. “I want my son to see my family, I want him to be safe in Syria. It’s not safe here, no matter what my government tells me.”

But the U.S. insists Muthana is not and has never been a U.S. citizen because her father was a Yemeni diplomat at the time of her birth. Her lawyer is fighting this.

President Trump and secretary of State Mike Pompeo have both said she’s not welcome. In February, Trump tweeted that he instructed Pompeo to not “allow Hoda Muthana back into the country.”

While she was a part of ISIS, she became a mouthpiece for the terror group, calling for Americans to be killed.

She claims ISIS took over her Twitter account, and that now, with therapy, she could become a model citizen.

“Before I came, I’ve never done any crime and I’m sure I’m not going to be doing any crimes in the future,” she said, “and I know I’ve come to Syria and look like I am a supporter of the worst terror group in history.”

Muthana was born in New Jersey and lived in Hoover, Ala., and claims she was radicalized online. A shy unassuming girl, she began living a double life on social media after being given a smart phone at 18.

In 2014, ISIS was ascendant, committing horrible atrocities, enslaving, raping women, beheading and stoning people, conquering vast areas of territory. It eventually ruled over 8 million people. Muthana, then 19, was was seduced and went to join them.

“I didn’t hate America” she told Fox News. “I didn’t hate anything. I just thought it was obligatory – when I started practicing I was very scared of the concept of hellfire. The Koran told me to go.”

She took some money earmarked for college, and got on a plane to Turkey, from where she was smuggled across the border to Syria. It was only then that she turned on a phone and called home – telling her mother she was with the terror group.

They have always condemned her move. She said she was ‘brainwashed.”

Once in the ISIS capital of Raqqa – she was held in a locked house for women until marrying. Her first husband, Suhan Rahman, was a well-known Australian fighter

She went on to marry two more men – all are now dead. She had a child who’s now 19 months old. In the early days of the caliphate, life was alright, she was able get food, and fully embrace the ideology of the caliphate – even though it committed such terror.

But as the U.S.-led coalition began to tighten the noose, life became hard, food started to dry up.  And when Presidnet Trump took office, he told the U.S. military to take the gloves off, at which point the airstrikes picked up and ISIS families were moved from one town to another. They eventually ended up in the town of Baghouz, where they made their last stand.

Today, every ISIS member I speak to says they regret their decision. But it seems clear they only changed their mind when it became clear their caliphate had been defeated.