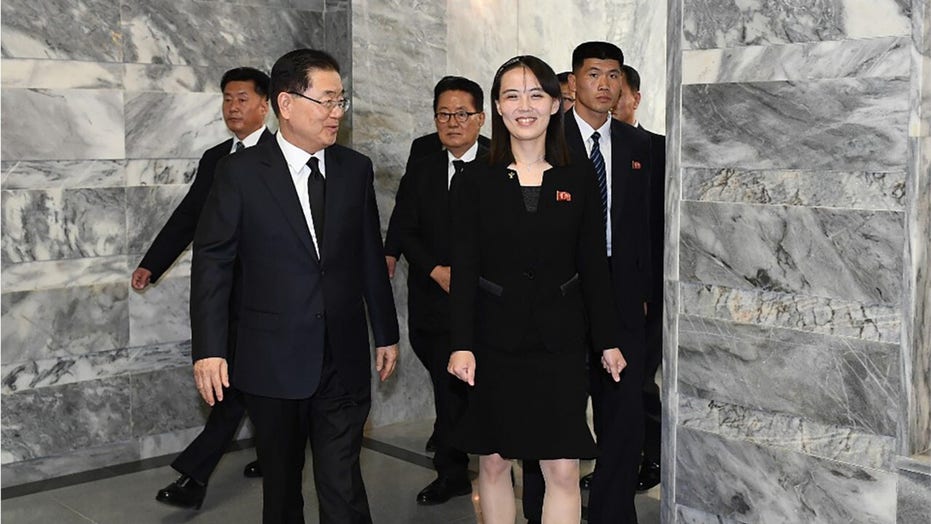 Who is Kim Yo Jong, Kim Jong Un's potential successor in North Korea?

Amid the rampant rumors last month surrounding North Korean leader Kim Jong Un’s health, speculation swirled if his little sister Kim Yo Jong would be the most likely successor.

While photographs shared by the Hermit Kingdom over the weekend showed its resurfaced leader, pivotal questions over the succession line, and if the deeply patriarchal dynasty is ready for a female leader, remain at the forefront of foreign political news.

Kim Yo Jong cuts an intriguing figure as the North’s demure diplomat who is fast becoming the Hermit Kingdom’s second-most-powerful person.

"Kim Jong Un's sister has been establishing herself publicly as a part of the senior leadership in recent years,” Matthew Schmidt, a professor of national security and political science at the University of New Haven, told Fox News. “In particular, she's emerged as her brother's keeper, so she's seen by military leaders as a competitor for succession. They're not dismissing her.”

He continued: “But a female leader is harder to imagine than a male one. But she has the capacity to compete for power if she wants to. What we don't know is whether she wants to fight for the job if she wants it.”

Indeed, Kim Yo Jong, who is believed to be 32, comes with increasing political prowess.

According to Harry Kazianis, senior director for Korean Studies at the Center for the National Interest, she "is the only person who could lead North Korea and continue on the regime as we know it today."

"We must remember that the Kim family are worshipped like gods. Ms. Kim would be the only 'god' with the age and experience to take over the nation," he stressed.

In 2014, she was appointed First Deputy Director and de facto leader of the Propaganda and Agitation Department of the Workers' Party of Korea (WPK). In 2017, she was promoted into the WPK's leading policymaking body, seemingly to strengthen her stance in the "Baekdu bloodline" and DNA of dictatorship.

The move is also speculated to have bolstered Kim Yo Jong into being in charge of the State Security Department, as well as the "Office 39."

"Office 39 is mostly concerned with bringing in high-end goods, wine, food, cars, tech, medicines, whatever the Dear Leader needs to use for himself or to grease the wheels of military leaders, etc.," Schmidt explained. "North Korea is a military government. The most important people to Kim, people he has to keep happy, and keep a balance of fear in, wear uniforms."

In January that same year, the Supreme Leader's youngest sibling was put on notice – alongside several other North Korean nationals –  by the U.S. government for "severe human rights abuses" and "rigid censorship policies" that conceal the regime's "inhumane and oppressive behavior."

"Until recently, it was widely assumed that the strict Confucian culture of North Korea precluded choosing a woman to rule the nation. However, Kim's sister, Kim Yo Jong, has gained prominence, authority, and important titles in recent years," explained Bruce Klingner, a senior research fellow for Northeast Asia at the Heritage Foundation. "Regardless of who assumes power, there are no indications that a successor would pursue different domestic or foreign policies. The regime has long emphasized the centrality of nuclear weapons to its national security—and its resistance to negotiating them away."

Over the past few years, Kim Yo Jong has also stepped more and more into the public limelight.

In February 2018, she garnered worldwide news headlines when she served as her brother's special envoy and was seated alongside U.S Vice President Mike Pence at the opening ceremony of the Winter Olympics in South Korea.

She also stood with her brother as he signed the Singapore statement at his initial summit with President Trump in June 2018. She was spotted again in Hanoi during her brother's follow-up meeting with Trump in Hanoi, giving rise to whispers of a flourishing confidante to the top-brass and powerhouse in her own right.

Domestically, Kim Yo Jong has also taken more and more to announcing official messages to the North Korean people.

Little is known about her personal life, other than that she was educated in Switzerland and is believed to have married the son of a government official in early 2015, and gave birth to a son months later. Speculative reports have suggested that the father was not her husband, but a military guard overseeing the presidential compound.

DURING THE CORONAVIRUS CRISIS, HOW IS NORTH KOREA REALLY HANDLING ITS 'ZERO CASES'?

South Korean officials denied any unusual activity taking place in the northern peninsula, and it was not the first time the dictator had disappeared from public view for a considerable length of time. He was seen publicly on April 11 and did not reemerge again until the beginning of May.

Just prior to his resurfacing, satellite imagery released last week suggested that Jong Un may well have escaped the coronavirus pandemic spreading in the capital Pyongyang, and was hunkered down in a rural resort.

While many reports have pointed to Kim's sister stepping into the top job if needed, other regional analysts argue that the male-dominated system is not yet equipped for female leadership. Some reports have indicated that the family's long-exiled uncle, 65-year-old Kim Pyong II, would also be a prominent challenger and is the last known survivor of founder Kim Il Sung.

The half-brother of Kim Jong Un's late father Kim Jong II, Pyong Il, is said to have been passed over for the grooming position more than three decades ago. Kim Jong Il went on to rule the closed country from 1994 until his death in 2011.

According to Bloomberg News, the half-brother instead spent almost 40 years serving as a diplomat in Europe, returning to the homeland in 2019.

And even though Kim Jong Un turned out to be alive in spite of the growing heap of hearsays, Kim Yo Jong has now earned herself a special spotlight on the radar of U.S. intelligence.

"No one should make the same mistake that was made with her brother when he took over.  Some assumed he would be more open to reform and opening up since he had experience living outside North Korea. That was, of course, wrong," added David Maxwell, Senior Fellow at the Foundation for Defense of Democracies. "There is speculation that she is as brutal as her brother."