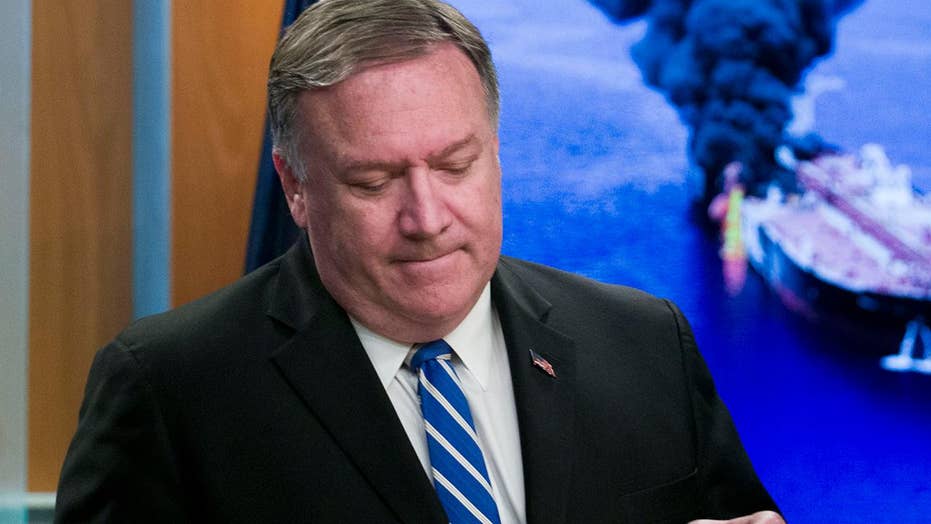 Iran is getting desperate as sanctions continue to cripple their economy, Rep. Michael McCaul says.

Amid increased brinksmanship with the United States, Iran announced Monday its intention to exceed the low-enriched uranium stockpile limit it agreed to in the 2015 nuke deal -- unless certain demands are met by the pact's remaining signatories within the next 10 days.

Behrouz Kamalvandi spoke to journalists at the country's Arak heavy water facility. He acknowledged Iran has already quadrupled its production of low-enriched uranium — which can be used in a nuclear reactor, but not in a bomb.

POMPEO BLAMES IRAN FOR TANKER ATTACKS, SAYS US DOES NOT WANT WAR BUT WILL TAKE ACTION IF NEEDED

Under terms of the multinational nuke deal -- engineered by the Obama administration in July 2015 but significantly weakened when the Trump administration withdrew in May 2018 -- Iran can keep a stockpile of no more than 660 pounds of low-enriched uranium. Kamalvandi said that, given Iran's recent decision to quadruple its production of low-enriched uranium, it would pass the 660-pound limit on June 27.

The spokesperson said, however, the country would stay within the limits of the original deal -- but only if Britain, France, Germany and the rest of the European Union followed through with plans to give Iran access to international banking systems, according to The New York Times.

But after America's pullout from the pact and the subsequent initiation of sanctions, Tehran set a July 7 deadline for Europe to come up with better terms for the deal, or the Islamic Republic itself would take additional steps away from the accord -- likely meaning it would further boost enrichment.

BETO PUSHES FOR PEACE WITH IRAN, ACCUSES OF TRUMP ADMIN OF 'GUNNING FOR WAR'

Israeli Prime Minister Benjamin Netanyahu on Monday called for more sanctions if Iran were to break the stockpile limit.

"Should Iran deliver on its threats, the international community will have to implement, immediately, the pre-set sanctions mechanism," Netanyahu said.

National Security Adviser John Bolton told the Washington Free Beacon in an interview published Monday that the U.S. is willing to talk to Iran, but noted, "It's a very precarious situation." The interview was conducted prior to Iran's latest provocative announcement.

Bolton said the Iranians are "acting as if it's the Obama administration and that they don't really fear American capabilities...They are in deep economic trouble in Iran as a result of the president's termination of the nuclear deal and the reimposition of sanctions."

Enriching a supply of uranium means boosting its concentration of the type of uranium that can power a nuclear reaction. That type, or isotope, is called U-235. Enrichment basically means stripping away atoms of another isotope, called U-238.

Boosting its purity to 20 percent means removing 22 more unwanted isotopes per atom of U-235, while going from there to 90 percent purity -- weapons-grade territory -- means removing just four more per atoms of U-235.

That means going from 20 percent to 90 percent is a relatively quick process -- something that worries nuclear nonproliferation experts. Iran maintains its nuclear program is for peaceful purposes.