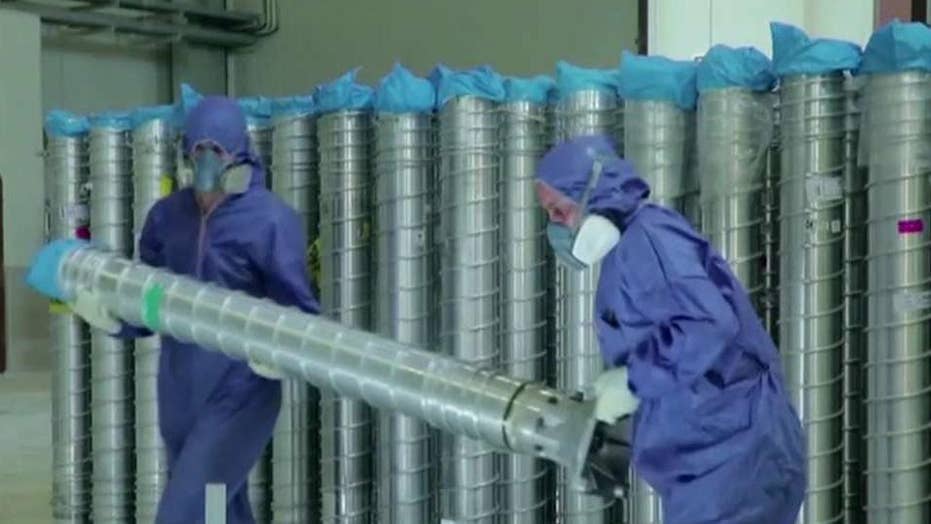 Iran continues to threaten US, EU amid new fallout from nuclear deal

Europe opens the door to new sanctions on Iran as the regime says they are enriching more uranium than before 2015; Trey Yinst reports.

The five countries that lost citizens when Iran accidentally shot down a Ukrainian passenger plane, killing all 176 people on board, are demanding that Tehran accept “full responsibility” and compensate the victims’ family members.

After a meeting in London Thursday, foreign ministers from Canada, the U.K., Afghanistan, Sweden and Ukraine urged Iran to allow a "thorough, independent and transparent international investigation," as well as a criminal probe and "impartial" judicial proceedings against those found responsible for downing the plane.

Foreign ministers from Canada, Afghanistan, the U.K., Ukraine, and Sweden after a meeting of the International Coordination and Response Group for the families of the victims of a flight that crashed shortly after taking off from Tehran.  (AP)

The Ukraine International Airlines aircraft was brought down by ballistic missiles shortly after taking off from Tehran's Imam Khomeini International Airport on Jan. 8. Among the victims were 57 Canadians, 11 Ukrainians, 17 people from Sweden, four Afghans and four British citizens, as well as Iranians.

"We are here to pursue closure, accountability, transparency and justice,” Canadian Foreign Minister Francois-Philippe Champagne said after meeting with his foreign counterparts.

Iran initially blamed a technical fault for the plane crash, before acknowledging in the face of mounting evidence that its paramilitary Revolutionary Guard had accidentally brought down the jetliner.

Canada — which doesn't have an embassy in Iran — has demanded official status in the investigation. Canadian Transport Minister Marc Garneau said Wednesday that two Canadian investigators were in Iran as part of an international team and had good cooperation, but Garneau wants their participation in the probe formalized.

Champagne said discussions were underway with Tehran on allowing international experts to participate in identifying the victims' remains.

Asked what pressure could be applied if Iran did not cooperate, Champagne said: "It's called the international community."

"Iran has a choice, and the world is watching," Champagne said.

The downing of the plane came amid heightened tensions between Iran and the United States over President Trump’s authorization of a drone strike that killed Gen. Qassem Soleimani, Iran’s top military commander, in Iraq earlier this month. In retaliation, Iran fired missiles at Iraqi bases housing U.S. troops.