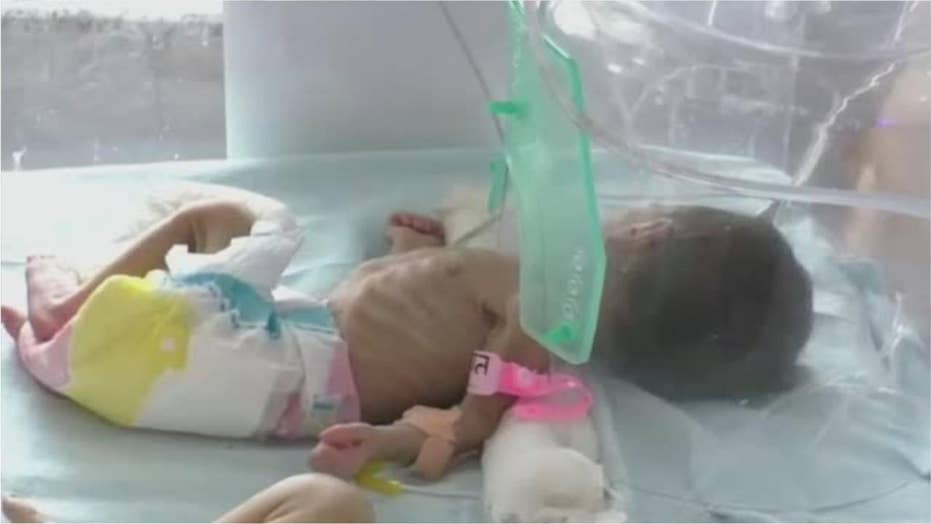 A newborn baby girl was found buried alive in an earthen pot in northern India. Police say the girl, who was hospitalized and is currently in critical condition, was found by a trader who had gone to a cremation ground to bury his stillborn daughter.

A newborn baby girl is fighting for her life days after she was found buried alive in an earthen pot in northern India.

The emaciated baby remained in critical condition on Tuesday at a hospital in Bareilly, a town in the state of Uttar Pradesh, with sepsis and a low platelet count that left her struggling with a blood infection, pediatrician Ravi Khanna told the BBC.

"There are chances of her survival, but we would know for sure only after five to seven days," he told the outlet.

The child was discovered Thursday by a man named Hitesh Kumar, who had gone to a cremation site to bury his stillborn daughter, police officer Abhinandan Singh said. As he dug the grave, his spade broke open a buried clay pot and he heard a baby’s cry.

“At one point I thought that my daughter had come alive. But the voice was actually coming from the pot,” he told Agence France-Presse.

Chief pediatrician Dr. Saurabh Anjan told the BBC that the baby was born prematurely, possibly at 30 weeks, and weighed just two pounds. Her exact age was not clear, but officials speculated she ranged from a few days to a week old when she was found.

At one point I thought that my daughter had come alive. But the voice was actually coming from the pot.

Medical experts have differed on how long the baby was buried alive before her rescue. Khana suspected she may have been in the ground for as much as four days, surviving on her fat stores, while Anjan estimated she was trapped for only a few hours, the outlet reported.

Local politician Rajesh Kumar Mishra has named the girl Sita after a mythological Hindu goddess who was found by King Janak as he plowed a field, the BBC reported. He and his wife intend to adopt the abandoned baby.

"It's a miracle that she survived,” he told the BBC. “I believe that God has saved her life and sent her to me. Now it's our duty to do everything for her.

"She is oscillating between life and death. Once she recovers, I will take her home and raise her as my daughter.”

Singh said police are searching for the baby’s parents. He said "strict action" will be taken against those guilty of burying the baby. A possible motive wasn’t immediately clear.

Indian families, especially in poor communities, generally prefer boys, as they consider girls to be a financial burden for educating and marrying off, which requires money for a dowry.

Abortion of female fetuses and cases of baby girls killed after birth are not uncommon in India, according to the BBC.