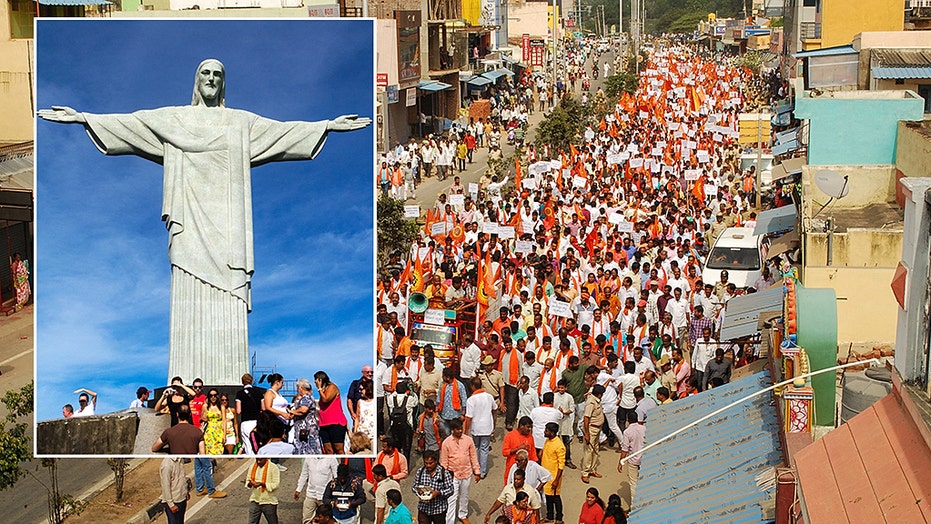 Hundreds of Hindu extremists gathered near a hill in southern India to block the construction of a massive Jesus statue that would rival Rio de Janeiro's Christ the Redeemer.

The members of Rashtriya Swayamsevak Sangh (RSS), the hardline parent organization of Prime Minister Narendra Modi's Bharatiya Janata Party, staged protests in the southern state of Karnataka's Ramanagara district this week, claiming the planned 114-foot statue will go "against the spirit of communal harmony," the Times of India reports.

Protesters threatened more action if the government does not stop the construction by Jan. 25 as 1,000 police officers stood by.

Days earlier, Indian Congress leader DK Shivakumar, a Hindu, laid the foundation in front of a model statue of Jesus Christ on a hill named Kapalabetta in Harobele, a village of 3,500 where Christians form a majority.

Protesters against the statue's construction are arguing the hill is the site of a Hindu deity, though no temple is currently there.

"Let me remind Shivakumar, it (India) is a land of Krishna and not Christ and we will not allow the Christ statue to be erected on Kapalabetta," RSS leader Kalladka Prabhakar Bhat told those gathered at the protest, according to reports.

Hundreds of Hindu activists affiliated to India's ruling party rallied on January 13 to protest a planned Jesus statue that will rival Rio de Janeiro's Christ The Redeemer colossus for size. (Photo by STR/AFP via Getty Images)

Father Cyril Victor Joseph, chairman of the archdioceses' media commission, told UCA News the controversy is unnecessary because the land has long been owned by the church.

“We used the same land for decades and conducted the Way of the Cross during Good Fridays,” he said. “A cross was there, and we wanted to replace it with a statue of Jesus after the land was donated to us.”

The state government is currently reviewing the ownership of the land as the construction has been halted, Christian Post reports.

The main religion in India is Hinduism, and Hindu nationalists view non-Hindu Indians as non-Indian. The more than 66 million Christians in the country face heavy persecution, especially if they convert from Hinduism to Christianity.

Since the current ruling party took power in 2014, persecution against Christians has increased and Hindu radicals often attack Christians with little to no consequences, according to watchdog organization Open Doors USA.

The U.S. Commission on International Religious Freedom has warned against “the growth of exclusionary extremist narratives” in India that facilitate campaigns of violence, intimidation, and harassment against non-Hindu minorities and lower-caste minorities from both public and private actors.