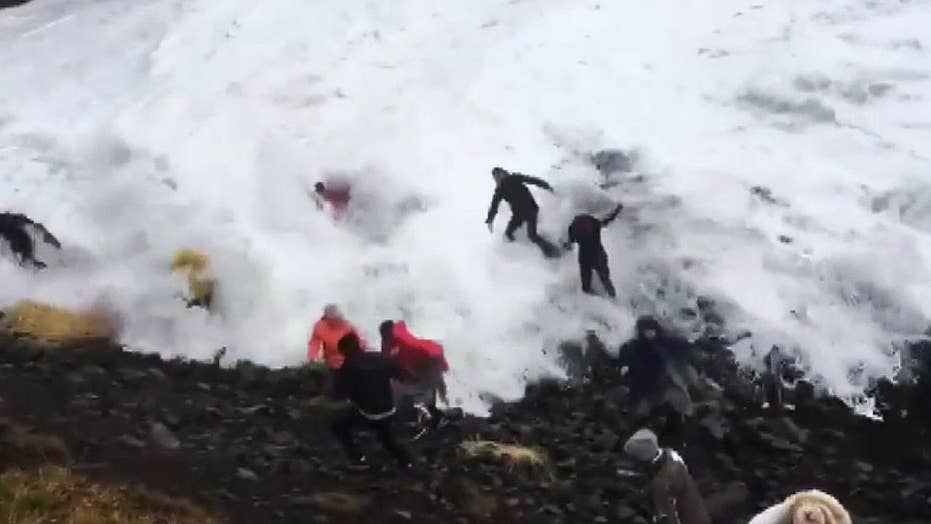 A group of tourists who got too close to the surf on an iconic beach in Iceland were knocked down by the region's notorious "sneaker waves" last week, moments after another man was almost swept into the ocean.

The incident happened on Nov. 11 at the iconic Reynisfjara Beach, located on the country's southern coast.

The beach, which features black sand, steep cliffs, and towering Reynisdrangar sea stacks in the distance, is also notable for the powerful waves that can sometimes inundate sections of the beach where tourists like to roam.

That's exactly what happened last week when a group of tourists were caught up in a wave that inundated part of the beach.

Tour guide Thorolfur Sævar Sæmundsson, who filmed the incident from a safe distance, told Storyful the beach is safe "95 percent of the time" but that “sometimes we have high waves. People need to be careful."

In the video filmed by Sæmundsson, a large wave knocked over several tourists, who could be heard screaming and reacting as water carries them a few feet down the beach. Sæmundsson said he warns people not to go down to the shoreline because of the surprising "sneaker waves" that can take visitors by surprise.

“Idiots,” the tour guide can be heard saying in the video.

Sneaker waves -- large waves that strike without warning -- sometimes claim lives of the unwary due to their unpredictability. The waves typically appear in the U.S. along the coast of the Pacific Northwest. A man on vacation with his family in Northern California was killed on his 39th birthday earlier this year after he was swept into the sea by a "sneaker wave" when fishing on some rocks.

"Sneaker waves are deadly, larger-than-average swells that can suddenly and without warning surge dozens of feet higher up the beach than expected, overtaking the unwary,' according to the National Weather Service.

The agency says they are called "sneaker waves" because they often appear with no warning after long periods of quiet surf and much smaller waves that can last for up to 20 minutes.

In Iceland, the iconic Reynisfjara Beach has been the site where several tourists have died over the past decade due to the waves, with many close calls also being reported.

Around the same time of the incident caught on video, another tourist was injured when he was also knocked over by a wave and nearly dragged out to sea, Icelandic news site Visir reported.

A warning sign at Reynisfjara Beach in Iceland as seen in October 2018. (Travis Fedschun/Fox News)

The entrance to the beach area does feature warning signs that highlight the risk, but officials said the two incidents have prompted a safety review of the tourist site.

At a meeting on Friday, government officials introduced measures to improve safety at the beach that could allow police to close the site for five to seven days from November till March every year due to weather conditions, Icelandic news outlet Morgunblaðið reported.

A group of tourists in Iceland were left scampering to safety when a large chunk of a nearby glacier suddenly collapsed into the sea, producing a gigantic wave that caught the adventurers by surprise.

Another project in the works is a wave forecast system for the beach with a connected warning system to inform tourists who plan on traveling to the site. The project would also include a mast on the beach with a light that would flash a warning at times of danger, according to the Iceland Review.

Icelandic Minister of Tourism, Industry and Innovation Þórdís Kolbrún Reykfjörð Gylfadóttir has said the recent incidents prove why a risk evaluation of the area is necessary.

“It’s unacceptable that there’s a risk of a massive accident in one of the most popular tourist locations in the country, without the necessary arrangements in place," she said at a meeting on Friday. "Certain improvements have been made, but the responsibility for the case is complicated as well as the fact that travelers often ignore warnings, putting themselves at great risk."