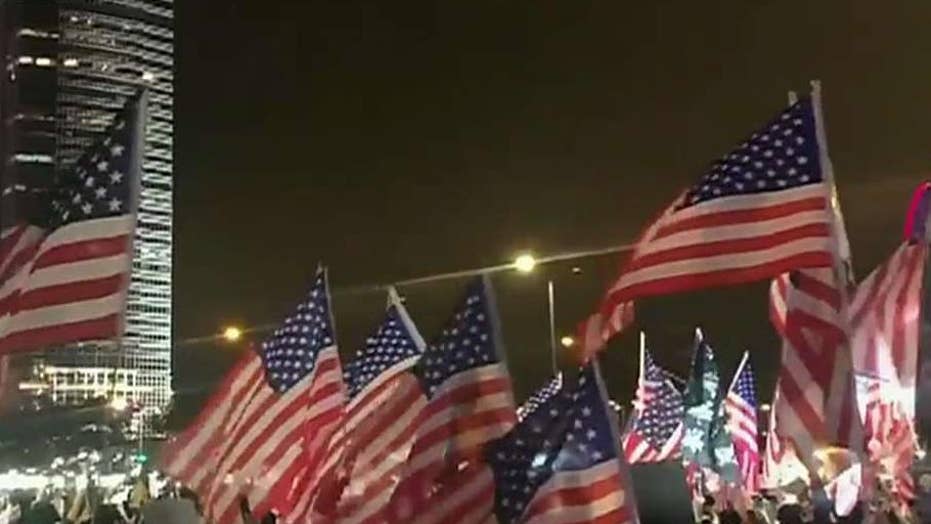 Pro-democracy protesters in Hong Kong expressed thanks for President Trump on Thursday, holding up a picture of him as the fictional boxer Rocky Balboa.

The "Thanksgiving Rally" included people wearing the American flag and singing the national anthem. Thousands of people attended the rally after Trump approved legislation that authorized sanctions against human rights violators in China, according to The Washington Post.

Trump posted the now-viral boxing photo -- showing his face on actor Sylvester Stallone's body -- on Wednesday but it had reportedly already surfaced on the internet prior to his tweet.

The tweet, which didn't include any context, came after polling showed voters souring on impeachment and he enjoyed support from a packed rally in Florida.

While Trump faced down Democrats in Washington, he also clashed with Chinese officials over what the administration called unfair trade practices.

Le called it a “nakedly hegemonic act.” He urged the U.S. not to implement the bills to prevent greater damage to U.S.-China relations, the ministry said.

In a statement about the meeting, the U.S. Embassy in Beijing said: “The Chinese Communist Party must honor its promises to the Hong Kong people.”

The U.S. “believes that Hong Kong’s autonomy, its adherence to the rule of law, and its commitment to protecting civil liberties are key to preserving its special status under U.S. law,” it said.

“I signed these bills out of respect for President Xi, China, and the people of Hong Kong,” Trump said in a statement. “They are being enacted in the hope that Leaders and Representatives of China and Hong Kong will be able to amicably settle their differences leading to long term peace and prosperity for all.”

While China has repeatedly threatened unspecified “countermeasures,” it’s unclear exactly how it will respond. Speaking on Fox News, Trump called the protests a “complicating factor” in trade negotiations with Beijing.

At a daily briefing, Chinese Foreign Ministry spokesman Geng Shuang responded to a question about how Trump’s endorsement of the legislation might affect the trade talks by saying it would undermine “cooperation in important areas.”