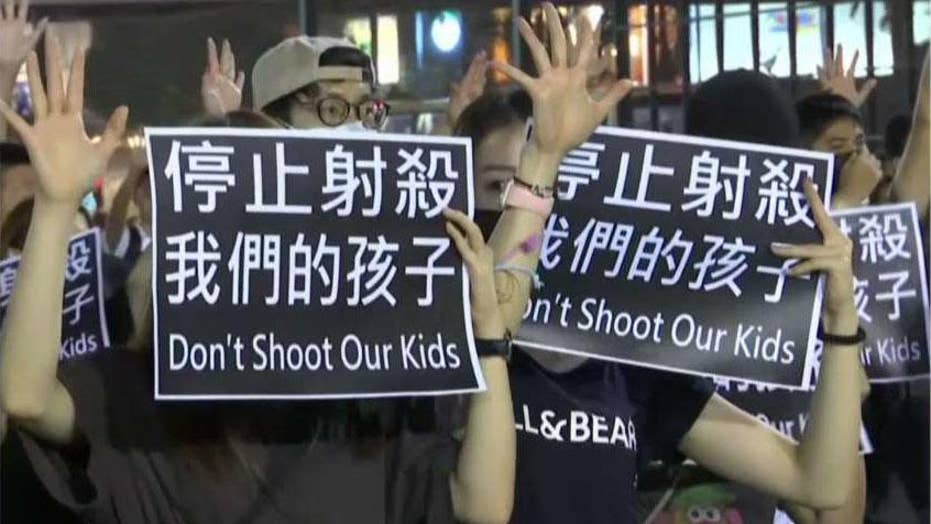 A Hong Kong teenager who is still recovering from a gunshot wound he suffered during pro-democracy protests earlier this week now faces up to a decade in prison after being charged with rioting and attacking police.

An officer fired at Tsang Chi-kin on Tuesday after the teen struck him with a metal rod, making Tsang the first known victim of police gunfire since the protests began in June.

The 18-year-old is among seven people charged Thursday with rioting, which carries a penalty of up to 10 years in prison. He also faces two additional counts of attacking two police officers, punishable by up to six months in prison, the Associated Press reports.

Tsang and two others who were hospitalized did not appear in court Thursday, but dozens of their supporters, many in black, sat outside the courthouse. The Chinese government says Tsang's condition is stable.

Students march to the Chinese University to show support to those students who were arrested by police in Hong Kong, on Thursday. (AP)

The shooting has sparked even more protests in Hong Kong and news of the charges come as calls are growing for officials to ban the wearing of masks in the semi-autonomous Chinese territory.

Local media reported that Hong Kong's Chief Executive Carrie Lam will hold a special Executive Council meeting Friday to discuss a ban on the masks, which have helped protesters conceal their identities, and other tough measures under colonial-era emergency law.

Yet activists and some lawmakers are warning that such measures would only further alienate the people and could prompt a more ferocious backlash.

The Junior Police Officers Association, representing front-line officers, said the force has been stretched thin. In a statement Wednesday, it urged the government to impose a curfew and other emergency measures to maintain public order.

A pro-government group, including lawmakers and lawyers, also said Thursday that authorities should use the example of a Canadian law that imposes a jail sentence of up to 10 years on anyone wearing a mask during a riot or unlawful assembly.

But Ip Kin-yuen, a legislator representing the education sector, warned it would be akin to “adding oil to the fire” and could further weaken the government in dealing with the crisis.

Legislator Michael Tien told the Associated Press that protesters could challenge a mask ban and any curfew order, just as tens of thousands of people have defied police bans on rallies and taken to the streets in the past months.

But he said it could work if the government also responds to at least the key demand of the protesters, which is to hold an independent inquiry into alleged police brutality.

“They need to use carrot and stick at the same time,” Tien said.

The protests that started in June over a now-shelved extradition bill have since snowballed into an anti-China campaign amid anger over what many view as Beijing’s interference in Hong Kong’s autonomy, which was granted when the former British colony returned to Chinese rule in 1997.

More than 1,750 people have been detained so far.