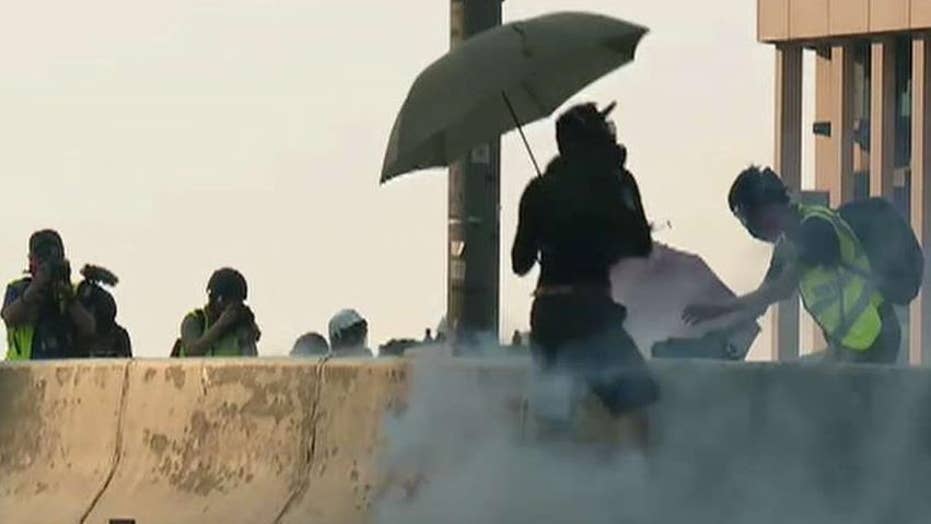 A Hong Kong pro-democracy lawmaker is accusing the semi-autonomous region’s police of being “trigger-happy and nuts” after an officer shot a teenage protester at close range in the chest during demonstrations this week.

The blistering criticism comes as hundreds of people and classmates of 18-year-old Tsang Chi-kin rallied outside his school Wednesday, chanting anti-police slogans and demanding accountability. An officer fired at Tsang Tuesday after the teen struck him with a metal rod – making Tsang the first known victim of police gunfire since the protests began in June, the Associated Press reports.

"The sensible police response should have been to use a police baton or pepper spray, etc., to fight back,” Mo added, after viewing a video of the incident. “It wasn't exactly an extreme situation and the use of a live bullet simply cannot be justified."

Hundreds of students at a Hong Kong college staged a strike Wednesday to condemn the police shooting of a teenager during pro-democracy protests that marred China's National Day. (AP)

Tsang is currently hospitalized and his condition was described by the government as stable on Wednesday.

Sitting crossed-legged, some of his supporters Wednesday held an arm across their chest below their left shoulder — the location of the teenager's gunshot wound. One held a hand-written message condemning "thug police."

"During the protests, we would feel safe if he is around because he was always the first to charge forward and would protect us when we were in danger," the student said.

"I vividly remember him saying that he would rather die than be arrested. What an awful twist of fate that it was he, of all people, who was shot by the police."

Hong Kong is a former British colony that's been part of China since 1997 and which Beijing says benefits from autonomy, crediting a "one country, two systems" approach.

The structure allows the city certain democratic rights that are not afforded to people on the mainland — but, in recent years, some in Hong Kong have accused the Communist Party-ruled central government of slowly stripping their freedoms.

Hong Kong police, who have defended the officer's use of force against Tsang as "reasonable and lawful,” says the teenager has been arrested despite being hospitalized and that authorities will decide later whether to press charges.

Police Commissioner Stephen Lo said late Tuesday that the officer had feared for his life and made "a split-second" decision to fire a single shot at close range.

“The ‘black terror’ that has lasted for more than three months is close to craziness,” it reportedly added. “To stop the violence and curb disorder, we must make prominent the power of the rule of law, cut the tumor of violence and prosecute all rioters in accordance with the law as soon as possible.”

Yet the warning appeared to fall flat Wednesday as dozens of black-clad demonstrators also protested at a luxury mall in Kowloon district. Elsewhere, more than 1,000 office workers skipped their lunch to join an impromptu march in the city's business district against the police shooting.

British Foreign Minister Dominic Raab criticized the shooting as "disproportionate" and some U.S. lawmakers also joined in the condemnation.

The Chinese foreign ministry office in Hong Kong slammed British and American politicians and accused them of condoning violence and crime. It called the rioters the "greatest threat to Hong Kong and the common enemy of the international community."

Meanwhile, an Indonesian journalist who was shot in the face with a police projectile on Sunday has been left blinded in one eye, her lawyer told the Hong Kong Free Press.

“Doctors treating Ms [Veby Mega] Indah have today informed her that regrettably the injury she received as a result of being shot by police, will result in permanent blindness in her right eye,” Michael Vidler was quoted as saying. “She was informed that the pupil of her eye was ruptured by the force of the impact. The exact percentage of permanent impairment can only be assessed after surgery.”