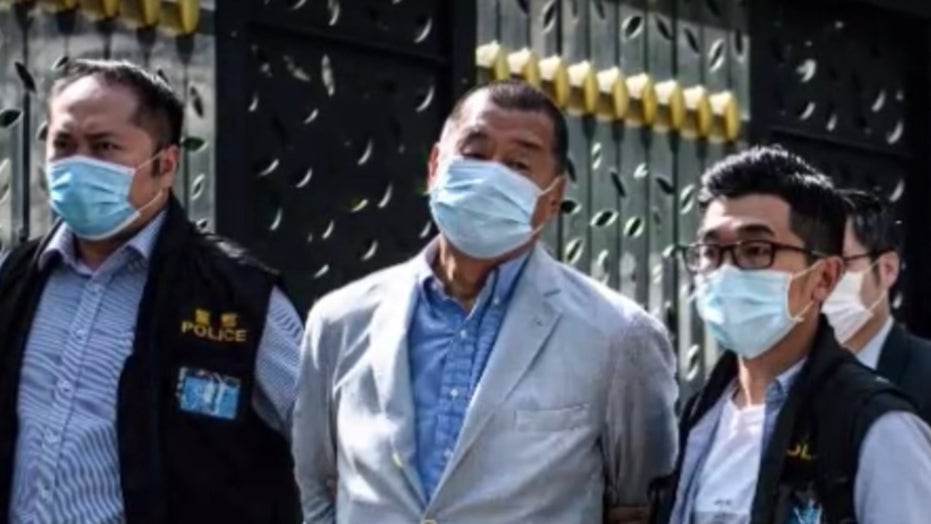 The 71-year-old Lai is an outspoken pro-democracy figure and regularly criticizes China’s authoritarian rule and Hong Kong’s government. He heads the Next Digital Group, which operates the pro-democracy tabloid Apple Daily. The paper often condemns China’s Communist Party government and has urged readers to take part in anti-government protests that raged over the past year.

Lai was charged with collusion with foreign powers, said Mark Simon, a Next Digital executive and Lai’s aide. Simon said police also searched the homes of Lai and his son and detained several other members of the media company.

Lai, center, is arrested by police officers at his home in Hong Kong on Monday. (AP Photo)

As police arrested Lai at his home, about 200 officers raided the Next Digital headquarters. Desks were searched and 25 boxes of what authorities called evidence were carted out of the building.

Hong Kong police said they arrested at least nine people between the ages of 23 and 72 on suspicion of violating the new security law, with offenses including collusion with a foreign country and conspiracy to defraud. They did not release the names of those arrested or provide further details of the charges.

Hong Kong police arrested Lai and raided the publisher's headquarters Monday in the highest-profile use yet of the new national security law Beijing imposed on the city after protests last year. (Apple Daily via AP)

“With the passage of the national security law and the really tough powers given to the police in their operations, we have seen now what we call ‘white terror’ become a reality, which will affect media organizations and journalists’ reporting,” said Chris Yeung, chairman of the Hong Kong Journalists Association.

Late last month, Hong Kong disqualified at least 12 pro-democracy nominees from a September legislative election after the government said the candidates failed to pledge allegiance to both Hong Kong and Beijing. The city later postponed the election by one year.

The move followed the firing of pro-democracy leader Benny Tai from his tenured position as an associate law professor at Hong Kong University and the arrests of four youths, ages 16 to 21, on suspicion of inciting secession through an organization for Hong Kong independence on social media.

In response to Hong Kong’s enforcement of the new law, the Trump administration on Friday announced that it is sanctioning Hong Kong Chief Executive Carrie Lam as part of a wave of sanctions on the city’s officials over the Chinese government’s “policies of suppression.”