The Chinese government is moving troops to the border with Hong Kong according to a tweet from President Trump and new video from scene; Benjamin Hall reports.

Satellite images this week apparently captured more than 500 Chinese military vehicles in and around a soccer stadium near the border with Hong Kong in what many believe was a response to several days of violent protests that disrupted operations at one of the world’s busiest international airports.

The images, taken by Maxar’s WorldView Monday, appear to show hundreds of military vehicles lined up at the Shenzhen Bay Sports Center just across the harbor from Hong Kong, where months of protesting reached a pinnacle this week after thousands of demonstrators shut down all flights at Hong Kong International Airport.

Chinese state media disputed claims that the government moved the vehicles in response to the protests, saying that the exercises had been planned beforehand and were not directly related to the unrest in Hong Kong. This came despite Beijing saying the protests were beginning to show the "sprouts of terrorism."

Reports have circulated that China is believed to have already dispatched officers to fortify the ranks of the Hong Kong police and may also have planted decoys among the protesters in order to encourage more violent acts that could eventually turn ordinary residents against the movement.

Flights resumed Wednesday morning after an outburst of violence between protesters and police caused cancellations and delays over a two-day period. 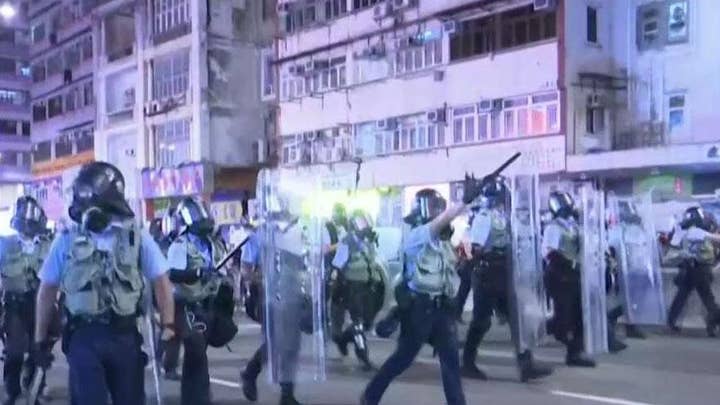 A statement from the airport's management said it had designated an area of the airport to be set aside for demonstrations, but no protests would be allowed outside the designated area.

For more than two months, Hong Kong has experienced mass protests urging democratic reforms and an investigation into police conduct. The shutdown of one of the world's busiest airports added to what authorities say is already a major blow to the financial hub's crucial tourism industry.

Protesters are demanding that Hong Kong leader Carrie Lam step down and pull legislation that would allow the government to extradite people to mainland China, where they would likely face torture or unfair, politically-charged trials. Recent demonstrations have called for an independent inquiry into the city’s police and its alleged abuse of power.

Beijing has been reluctant to act over fears of the effect it would have on the reputation Hong Kong has a separate and safe haven to invest 22 years after the former British colony was handed over to China.