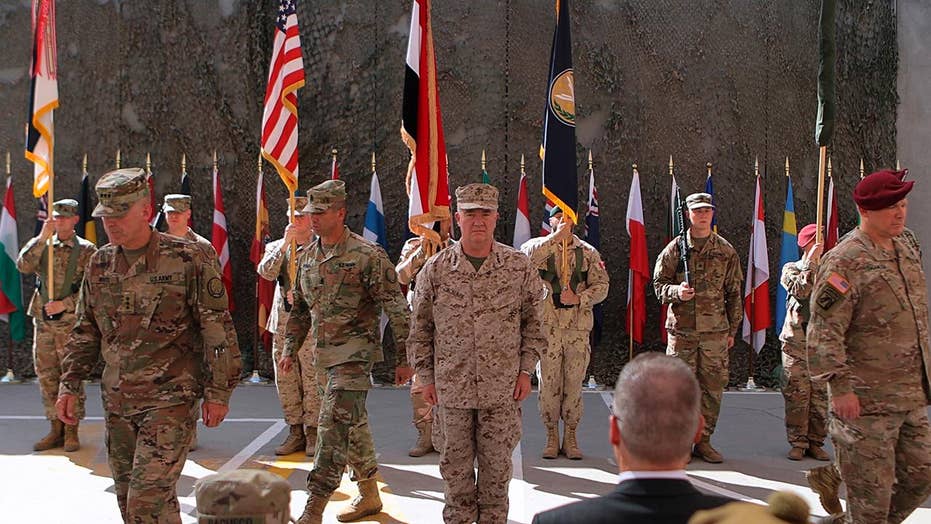 Iraq Parliament votes to expel US military from Iraq: What does that mean?

Germany and several other European nations on Tuesday began moving troops out of Baghdad, with some leaving Iraq entirely, amid soaring tensions in the region after an American drone attack that killed Iranian Gen. Qassem Soleimani in Baghdad last week.

The decisions follow a call from Iraqi lawmakers to expel foreign troops from the country and a pause in the U.S.-led coalition's training of Iraqi forces.

Germany said its forces would be “temporarily thinned out,” moving 35 of its roughly 120 soldiers serving in the Iraqi bases in Baghdad and Taji to neighboring Jordan and Kuwait.

“These forces can be moved back at any time if training in Iraq resumes,” the German defense ministry said in a statement.

Soleimani's death has sparked calls across Iran for revenge against America for a slaying that’s drastically raised tensions across the Middle East. (Office of the Iranian Supreme Leader via AP, File)

German Defense Minister Annegret Kramp-Karrenbauer and Foreign Minister Heiko Maas stressed in a statement to lawmakers that talks with the Iraqi government on a continuation of the mission to train Iraqi troops would go on, news agency dpa reported.

Roderich Kiesewetter, a lawmaker with Chancellor Angela Merkel's party who is on the parliament's foreign affairs committee, told Deutschlandfunk radio that this was “a very good step to give the Iraqi government time to evaluate the situation.”

“Our soldiers are staying in the region and the mission is being kept in place for now, even though it is suspended this week pending further consultation,” Kiesewetter said.

A growing number of European countries are shifting troops out of Baghdad or Iraq as the regional crisis escalates.

As many as 50 British personnel had been moved out of Baghdad’s Green Zone to either nearby Taji or out of the country, the Guardian reported, citing UK sources. The number of British troops in Iraq remains at about 400, with a majority based in Taji, according to the outlet.

Croatia's defense ministry said the country's 14 troops in Iraq have been moved to Kuwait, while Slovakia said it has moved its seven service members from Iraq to an unspecified location.

Slovenia, however, has said that its six soldiers posted at the Erbil base in northern Iraq will remain. The defense ministry said it is constantly monitoring the situation and will make further decisions based on future developments.

Finland and Sweden both have troops in Iraq that are part of the international coalition but have so far not said whether any military personnel would be moved out of the country.

Finland’s President Sauli Niinisto has acknowledged the crisis, saying relations between the United States and Iran are “in a critical state” and the international community “must use all means" to create dialogue.

In addition to European forces, Canadian Gen. Jonathan Vance announced that his country's military is temporarily relocating some soldiers from Iraq to Kuwait. Canada has about 500 soldiers in Iraq to help fight ISIS and currently leads the NATO training mission in Iraq.

Meanwhile, there are over 100,000 Iranian-backed militia fighters in Iraq. Their leaders have called for “revenge” for Soleimani’s death.

The U.S., however, has asserted that Soleimani was plotting to kill American diplomats and soldiers in significant numbers.

The 5,000 U.S. troops in Iraq were sent there more than four years ago to aid in the fight against ISIS. President Trump on Sunday threatened to slap Iraq with heavy sanctions if U.S. troops were ousted from their posts.