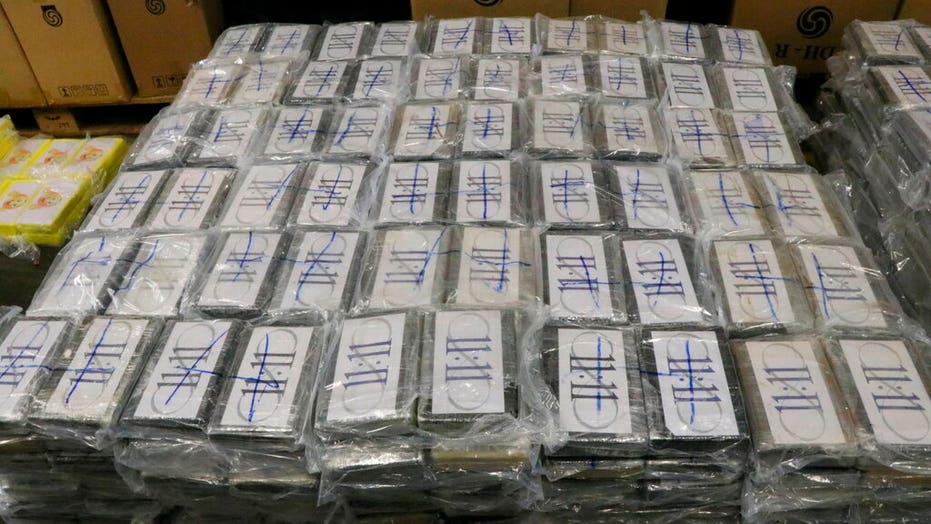 German customs announced Friday they have confiscated a record 4.5 tons of cocaine in a container shipped from Uruguay — a haul worth an estimated 1 billion euros ($1.1 billion).

Hamburg customs agency said the drugs were discovered two weeks ago when officers were completing a routine shipment check, which resulted in the country's largest single drug bust to date.

More than 4,200 packets of pressed cocaine in 211 bags were hidden inside the container, which paperwork claimed to be full of soybeans, according to authorities. The shipment from Montevideo, Uruguay, was expected to be transported to Antwerp, Belgium, but plans were thwarted when officials opened the shipment in northern Germany to only find black sports bags.

German customs authorities seize 4.5 tons (nearly 5 U.S. tons) of cocaine in a container shipped in Hamburg, Germany, from Uruguay, a haul with an estimated street value of nearly 1 billion euros ($1.1 billion). The customs office in Hamburg says that the drugs were seized two weeks ago when it checked the container that was en route from Montevideo to Antwerp, Belgium. (German Custom via AP)

“This enormous amount represents the largest individual security of cocaine in Germany and builds on the successes of the Hamburg customs in the last two years. In 2017, around 3.8 tonnes of cocaine were withdrawn from service through three individual seizures,” Hamburg Custom Agency said in a released statement.

According to the customs agency, the cocaine has already been destroyed “amid strict secrecy and extensive security precautions.”

“This outstanding success proves once again how powerfully German customs fight crime. With its sophisticated risk analysis, customs succeed in opening the right containers and extracting illegal goods from the enormous number of containers that pass through the Port of Hamburg every day.”

Last year, the Hamburg police seized drugs with a total street value of 520 million euros ($592 million), reported DW News. Hamburg Customs Commissioner Stephan Meyns told the DPA News Agency that, the drugs busted by the police were only a tiny portion of the estimated 30 tons of cocaine that are smuggled into Germany from South America year round.