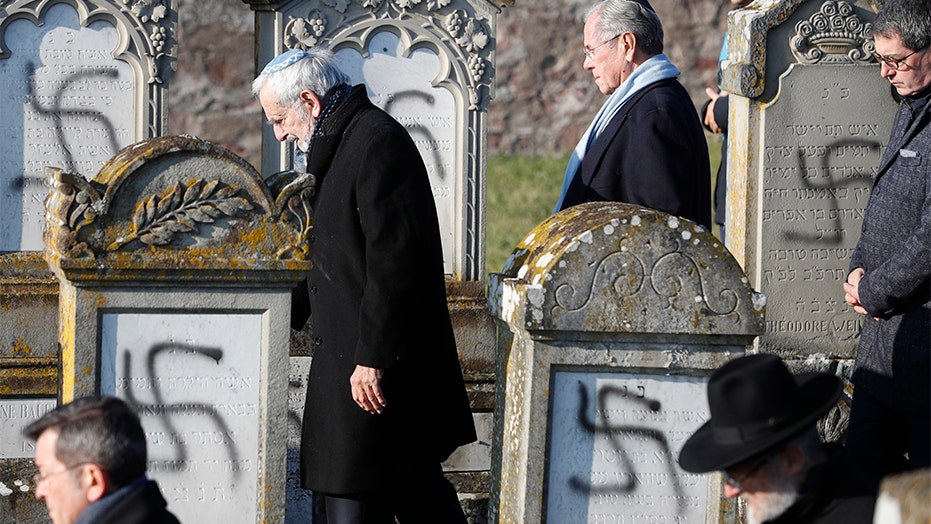 French President Emmanuel Macron is vowing to fight anti-Semitism “until our dead can sleep in peace” after more than 100 graves at a Jewish cemetery in northeastern France were painted over with swastikas.

The incident happened Tuesday in Westhoffen. French Interior Minister Christophe Castaner visited the site Wednesday to “reaffirm the state's determination to see the perpetrators of these anti-Semitic acts arrested and convicted,” local police say. They also announced that a “central anti-hate agency will be established for this purpose.”

“Jews are and make France,” Macron wrote in a tweet Tuesday night. “Those who attack them, even in their graves, are not worthy of the idea we have of France.”

Swastikas were spray-painted onto tombstones at a cemetery in Westhoffen, France this week. (Prefect of the Grand Est and Bas-Rhin region)

“Anti-Semitism is a crime and we will fight it, in Westhoffen as everywhere, until our dead can sleep in peace,” he added.

Images posted by police Wednesday showed community leaders and officials inspecting the rows of tombstones that had swastikas spray-painted on them.

Speaking alongside Jewish leaders, Castaner condemned the graffiti as a sign that "hate is on our national territory."

"We must respect the right to believe," he said.

Members of the Jewish community walk amid vandalized tombs in the Jewish cemetery of Westhoffen, west of the city of Strasbourg, on Wednesday. (AP)

France’s chief rabbi, Haïm Korsia, said he was “outraged and horrified to learn of yet another cemetery in Alsace" that had been defaced, according to the BBC.

Pictures of some of the tombstones that were vandalized at the Westhoffen cemetery. (Prefect of the Grand Est and Bas-Rhin region)

And the BBC reports that anti-Semitic messages were painted on the walls of a town hall in Rohr – near Westhoffen – last week. One of those messages, Jewish officials reportedly said, appeared to reference the Westhoffen cemetery.

In February, similar slogans and Nazi symbols were spray-painted on more than 90 graves at a cemetery in Quatzenheim, which also is in the Alsace region of France, which shares a border with Germany.