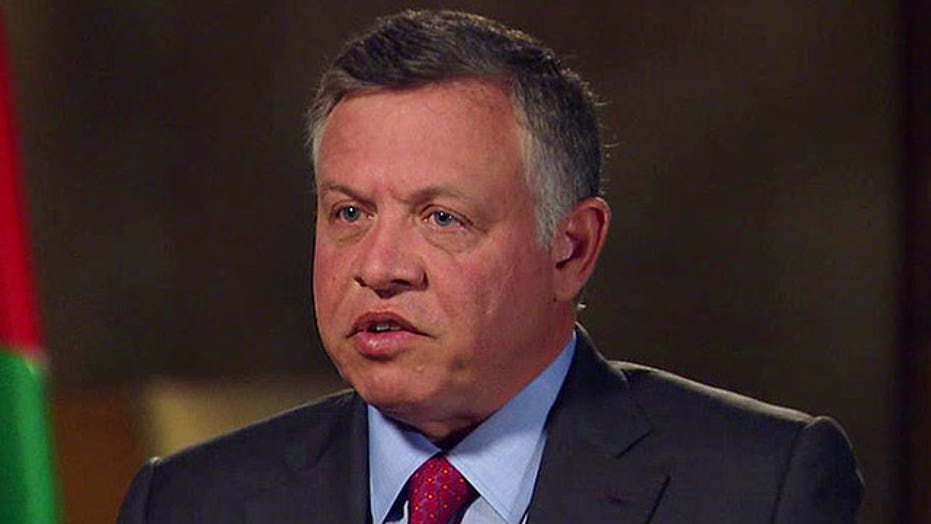 When America leads from behind, who meets our enemies head on? Jordan’s King Abdullah known widely as “The Warrior King” has given Fox News Reporting unprecedented access to his life and country as he fights two wars at once. But the picture he paints of the region and it’s future is a tragic one. In an interview with Bret Baier featured on tonight’s Special, Fox News Reporting Crossing Jordan – Escape From Terror, he warns that, “this could well be the beginning of World War Three”.

Sitting in the middle of the cauldron that is the Middle East, Jordan is at the eye of the storm. With its arms open to refugees fleeing across its borders from both Iraq and Syria, it has become the safe haven so many yearn for. Yet with enemies on all sides, and 750,000 refugees it is struggling under the burden.

Fox News Reporting spoke to many of these refugees living in the Kingdom, visiting them in the tented cities that they now call home, and going on patrol with the Jordanian military at the front lines with ISIS and the Syrian Regime. The stories are haunting.

Survivors of Assad’s gas attacks like Um Haddad from Damascus, talked of the agony on the morning of August 21, 2013 as her children started to choke and bleed. “My son was dying and we started screaming and crying,” she said. “My husband was slapping his face for him to wake up. He fainted and became unconscious.”

Other’s spoke of the horrors inside Assad’s torture cells, where blowtorches are used to melt people’s skin, and from where many people never return. One six-year-old girl who dreamed of seeing her father again, long after he'd been captured by Assad troops, and who sang songs to him every day, was found to be living on false hope. Her mother quietly admitted to Fox that he had died in the prisons, and she didn't have the heart to tell her.

While the refugee problem in Jordan is truly a disaster, and bears witness to the brutality of the neighboring conflicts, it also sheds light on the persecution of Christians, and the future of the religion in the land where it was born. Slowly and systematically, enemies are driving Christians from their towns and villages, killing them, or forcing them to convert.

In tonight’s special, Fox News Reporting uncovers a staggering underground railroad of hope, which brings persecuted Christians from the deserts of Iraq, to the camps of Jordan and, finally, to the streets of U.S. cities. Fox News has spoken to Mexican “coyotes” who are just one part of this lengthy chain trying to save Christians from the clutches of ISIS.

But while Jordan is indeed a safe haven and a sanctuary, it is also has a dark underbelly. Indeed about 2,500 Jordanians are estimated to be fighting with ISIS, and on the streets of Jordan support for the terrorists is clear. Although Jordanian authorities have cracked down on overt support of the group, it is still clearly felt around the country. As one man in the town of Zarqa, birthplace of notorious terrorist Ayman al-Zarqawi, told Fox News, “We know who all the supporters of ISIS are here, and we protect each other. There are many of us.”

To see all this and more, watch Fox News Reporting - Crossing Jordan – Escape From Terror. It premieres tonight at 10pm EDT and can be seen again Saturday at 8pm EDT and Sunday at 9pm EDT.